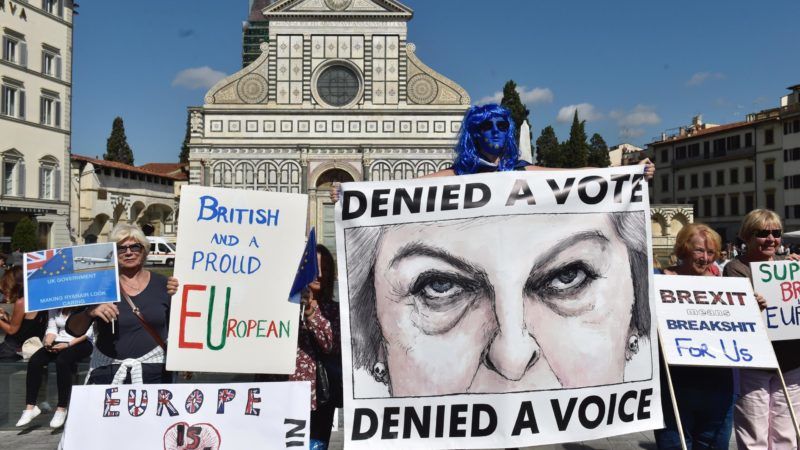 Protesters with placards in Piazza Santa Maria Novella for the event of the no Brexit Demonstration, in Florence, Italy, 22 September 2017. [Maurizio degl'Innocenti/ EPA]

In a major speech in Florence, May promised to meet Britain’s existing EU budget commitments until 2020 and outlined new legal guarantees for the rights of around three million Europeans living in the UK.

She also committed to maintaining Europe’s security, saying in a direct pitch to EU leaders: “We want to be your strongest friend and partner as the EU and UK thrive side by side.”

A fourth round of negotiations with the European Commission is due to start next week, with London keen to make progress on the terms of the divorce so that talks can move on to trade.

“While the UK’s departure from the EU is inevitably a difficult process, it is in all of our interests for our negotiations to succeed,” she said.

May confirmed she wanted a transition period after Brexit of “around two years” in which EU citizens could continue to work in Britain but have to register.

For both Britain and the EU, “access to one another’s markets should continue on current terms” during this period, she said.

She also promised to honour Britain’s financial commitments for the remainder of the EU’s current budget plan, saying no member state would “pay more or receive less”.

Britain’s contributions for two years would be at least 20 billion euros (£18 billion, $24 billion) — although this falls well below European estimates of Britain’s total Brexit bill.

With new offers on money and citizens’ rights, the prime minister addressed two of the three priorities of the EU.

Charles Grant of the Centre for European Reform said May was “right to adopt a positive tone”, but added that her offers were “not enough to unblock” the talks.

The suggestion that existing immigration and trading rules will continue for two years after Britain leaves the EU in March 2019 sparked immediate condemnation from eurosceptics.

“Theresa May’s Brexit vision is that we leave the EU in name only. All areas of integration we have currently will be rebadged,” said leading campaigner Nigel Farage.

May’s speech came 15 months after Britain’s referendum vote to leave the EU and six months after she triggered the two-year Brexit process, amid increasing demands by Brussels for more clarity.

One problem was that her own government is still divided — a fact highlighted this week when Foreign Secretary Boris Johnson laid out his own vision for life outside the EU.

After the speech, he said May’s words were “uplifting”.

Although May did not rule out her previous threat of walking away from the talks, she expressed optimism that a deal could be done.

On the issue of EU citizens’ rights, she sought to break the deadlock over the role of the European Court of Justice as the arbiter in any disputes.

She said the final deal agreed with Brussels would be fully incorporated into British law, to ensure parliament could not change it in the future.

A small group of British expatriates had gathered outside the Santa Maria Novella church complex where May spoke, holding up signs saying “Hands off our rights”.

Carolyn Slater, a 69-year-old pensioner who moved to Italy from Scotland, said: “We’re very fed up with being given no information.

“Brexit was absurd but it’s happened, we have to live with it now. From the start we’ve been told we’re a priority, but that’s wearing pretty thin.”

May is hoping her speech will be enough to unlock the talks in time for an EU leaders meeting on October 19-20, when her 27 counterparts will decide if talks can move onto trade.

The shape of that future deal remains elusive — although the prime minister insisted there could be no role for the ECJ, a totemic issue for eurosceptics in Britain.

She rejected the idea that Britain could adopt a model similar to that enjoyed by Norway, or a free trade agreement like the one recently struck between the EU and Canada.

“Instead let us be creative as well as practical in designing an ambitious economic partnership,” she said.

“May has expressed a constructive spirit which is also the spirit of the European Union during this unique negotiation,” Barnier said in a statement.

Constructive #FlorenceSpeech by PM May; must be translated into negotiating positions to make meaningful progress https://t.co/fCfBrqNhAp 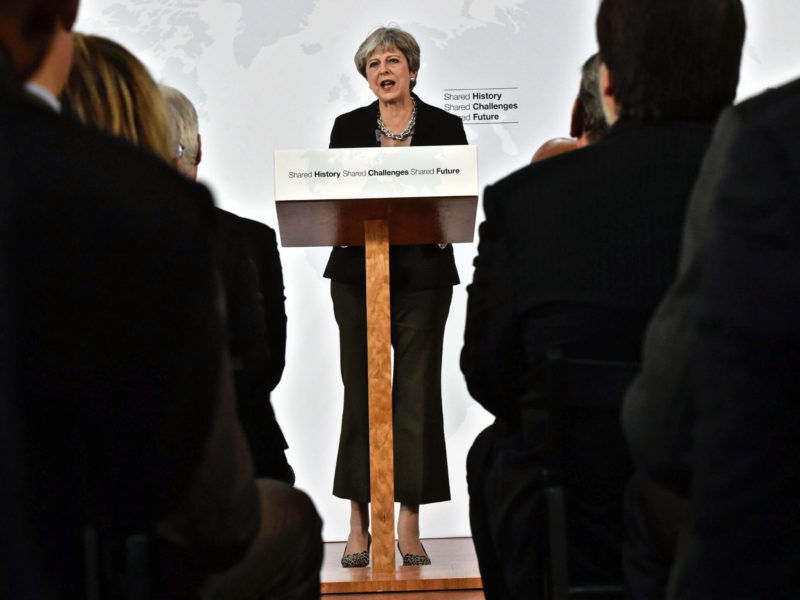 Italians approve of May’s speech venue, but not content

The Italian government, but also ordinary Italians expressed appreciation for UK Prime Minister Theresa May choice of Florence for a speech, during which she asked EU negotiators for more time for a transitional deal after Brexit.