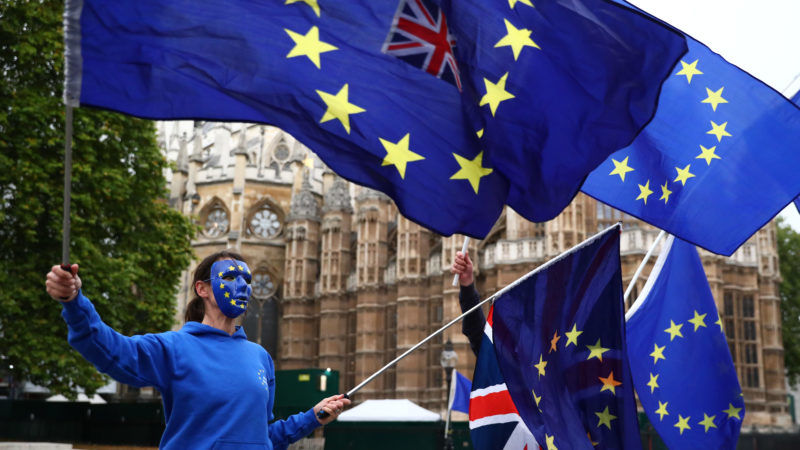 Pro-EU campaigners protest outside the Houses of Parliament in London, [Neil Hall/EPA]

On Tuesday evening (12 June), MPs voted by 324 votes to 298 to rejecting an amendment passed by the House of Lords in April that would strengthen the hand of the Commons in the event of it rejecting the final Brexit deal.

Minutes before voting began, the UK prime minister held last-ditch talks with around 15 Tory rebels, at which she is believed to have offered personal assurances that she would agree to the broad thrust of their proposals.

Under a suggested compromise offered by former Tory cabinet minister Dominic Grieve, who has warned a no-deal scenario could lead to a “national crisis”, ministers would have seven days to set out a fresh approach if Parliament rejected a deal. In the case of talks with the EU breaking down, they would have until 30 November to try to strike a new deal.

That means that the prospect of a ‘no deal’ Brexit is becoming increasingly unlikely.

After the votes, however, Brexiteers and Remain supporters battled for the airwaves to declare victory.

Anna Soubry, a Remain-supporting MP and former minister, who met Mrs May on Tuesday, said she expected the Prime Minister to “honour the undertaking she gave”, while Brexiteer Andrew Bridgen warned that the proposal would be an effective “veto” on Brexit and could “come back to haunt” the government.

Ministers sought to play down the concessions.

“There is an understanding that discussions will take place, and that could end up with a further amendment”, said the government’s Solicitor-General, Robert Buckland.

A statement by the Department for Exiting the EU, led by Brexit Secretary David Davis, insisted that “we have not, and will not, agree to the House of Commons binding the Government’s hands in the negotiations.”

The government was braced for a tight battle after junior justice minister Phillip Lee, a personal friend of May’s, resigned on Tuesday morning in order to back the veto amendment.

In the end Lee abstained, saying he trusted the premier to give parliament a “voice” in a compromise motion that was due to be presented when the bill returns to the unelected House of Lords on Monday (18 June).

Following a five-hour debate, MPs reinstated the precise day the UK will leave the EU – 29 March 2019 – in the proposed legislation while backing an amendment on the Irish border, guaranteeing there will be no new border arrangements without the agreement of the UK and Irish authorities.

The government won all eleven votes by narrow majorities. Further votes will take place on Wednesday but the government is unlikely to be defeated on any of them.