May cautious on route to Brexit as Rome urges clear timeline 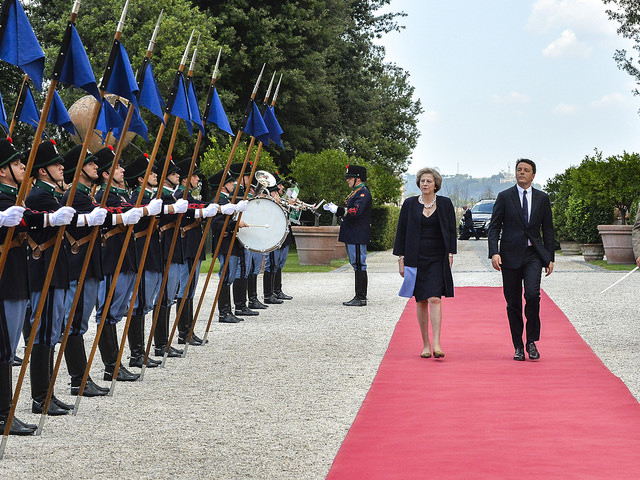 UK Prime Minister Theresa May on Wednesday (27 July) said Britain would take the time needed to steer its way towards the EU exit as Italian counterpart Matteo Renzi urged a clear timeline to deliver Brexit.

“It will take time to work out the nature of our relationship. And that’s why we should take time for these negotiations so that both sides can identify their objectives and opportunities,” said May, chosen by the governing Conservative Party to be premier in the aftermath of Britain’s shock vote to leave.

She said London would look to guarantee the rights of hundreds of thousands of Italians living in Britain and demand reciprocity for British nationals living in EU states.

“For us it’s important to give a message of a clear timeline to avoid the risks,” said the Italian premier, adding Rome regretted the decision in favour of Leave, not least for its potential impact on some 600,000 Italians living in Britain.

“But it is the British people’s decision and we respect it,” said Renzi.

May reassured him on an issue affecting some three million British-based EU nationals as well as around 1.3 million Britons according to UN figures who have taken advantage of the free movement of Labour across the bloc to work away.

“The only circumstances in which that would not be possible it would be if the rights of British citizens living in other EU countries would not be guaranteed,” she said.

May has insisted since taking office earlier this month that Brexit will not be overturned — even if parliament still has to endorse the divorce after 43 years of membership.

“We had a very clear message from the British people in the Brexit vote that they want us to bring in some controls on free movement. We will deliver on that,” May said.

“We should be developing the model that suits the United Kingdom and the European Union, not adopting necessarily a model that’s on the shelf already,” she said.

May said Britain and its EU partners must decide on the exact basis for future relations but has stated that negotiations will not start before year’s end.

France and Germany have urged Britain be given time to mull its exit path and Renzi has invited the leaders of both to Italy to discuss the issue next month.

Once negotiations are formally engaged Britain would leave the union at the end of a two-year process.

May, who said that Britain’s exit would not reduce “friendship” or “cooperation” on issues such as fighting terrorism and migration, will Thursday visit Poland notably to assuage Polish concerns on the future of 790,000 Poles working in the United Kingdom.