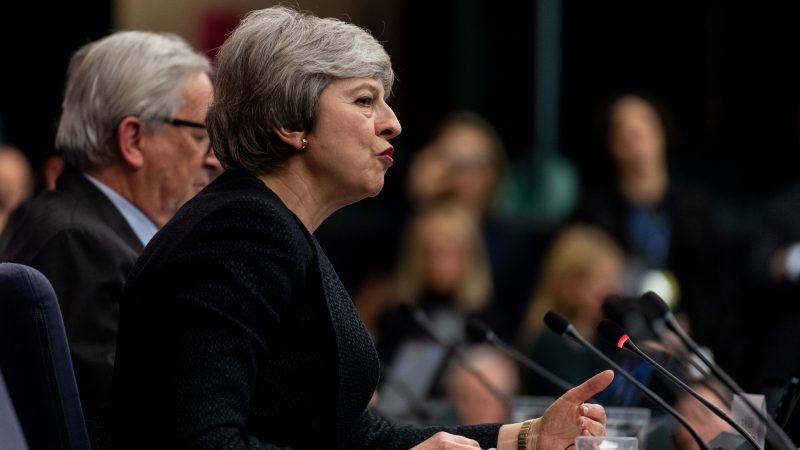 British Prime Minister Theresa May (R) and Jean-Claude Juncker, President of the European Commission (L) speak to the journalists during a press conference at the European Parliament in Strasbourg, France, 11 March 2019. May is facing a decisive week ahead with crucial votes on Brexit expected. [EPA-EFE/PATRICK SEEGER]

European Commission President Jean-Claude Juncker, who held another round of talks with May on the sidelines of a European Parliament plenary in Strasbourg, reminded the UK that they will be obliged to take part in the EU elections in the case of a delay.

“Having an insurance policy to guarantee that there will never be a hard border in Northern Ireland is absolutely right,” May told reporters in Strasbourg late on Monday evening (11 March).

“The deal that MPs voted on in January was not strong enough in making that clear – and legally binding changes were needed to set that right.”

Juncker: "The PM and I have agreed on a joint legally binding instrument relating to the withdrawal agreement…provides legal guarantees on the nature of the backstop." He adds that is it an "insurance policy."#Brexit #Strasbourg

The UK Prime Minister held last-minute talks with EU officials on Monday evening to obtain provisions from the EU that may convince MPs in Westminster to back her plans.

She arrived with a large contingent of UK representatives including chief Brexit negotiator Olly Robbins and Brexit secretary Stephen Barclay, while the EU was represented by a delegation including Juncker, EU Brexit negotiator Michel Barnier and European Commission Secretary-General Martin Selmayr.

Meanwhile, Juncker was clear that the agreements made on Monday were an “insurance policy” aimed at ensuring that there would never be a hard border between Northern Ireland and the Republic of Ireland.

However, Juncker added fuel to the fire on Monday evening in a letter to Council President Donald Tusk, in which he highlighted the fact that, if May were to lose her Commons vote on Tuesday and a subsequent delay to the UK’s withdrawal from the EU runs into the May EU elections, the UK would be legally obliged to take part in the vote.

“I would like to stress that the United Kingdom’s withdrawal should be complete before the European elections take place between 23-26 May this year,” Juncker wrote.

“If the United Kingdom has not left the European Union by then, it will be legally required to hold these elections, in line with the rights and obligations of all Member states as set out in the Treaties.”

When EURACTIV spoke to an EU official on how this could be done in practice, it transpired that the UK would be legally obliged to provide representatives in the European Parliament for as long as the UK is a member of the EU.

How this is done would be at “the discretion of the UK government” and EURACTIV was informed that if a delay were to take place, UK representatives in the European Parliament could be chosen by the UK government and not directly elected by citizens of the UK.

The EU official added that the situation was a “legal quagmire.”

In #Strasbourg, @EURACTIV reporter @SamuelStolton asks “what are you trying to achieve this evening?” #May stays silent. #Barnier smiling in background. #Brexit pic.twitter.com/9tpIbXGXd4

As part of the measures agreed on Monday, the EU and the UK have agreed a joint legally binding instrument with the aim of replacing the backstop with a permanent solution by December 2020. Juncker described it as a “complement” to the Withdrawal Agreement rather than a revision of it.

In addition, May and Juncker announced that the UK and the EU have committed to a joint statement in relation to the Political Declaration, laying out a number of commitments to work quickly towards agreeing a future relationship.

May also announced that the UK government will make a ‘Unilateral Declaration’ so that if the “backstop comes into use and discussions on our future relationship break down…there would be nothing to prevent the UK instigating measures that would ultimately dis-apply the backstop.”

However, the UK prime minister appears to have plenty more to do to convince lawmakers in the Commons. Labour leader Jeremy Corbyn immediately criticised her announcement on Monday evening, imploring members to vote against her plans.

“The prime minister’s negotiations have failed,” Corbyn said in a statement. “This evening’s agreement with the European Commission does not contain anything approaching the changes Theresa May promised Parliament, and whipped her MPs to vote for.”

A spokesperson of Northern Ireland’s Democratic Unionist Party said on Monday evening the party would have to examine the technical details of the revised plans before an official statement is made.

Meanwhile, Steve Baker, a leading member of the European Research Group, a backbench group of around 90 eurosceptic Conservative MPs, dismissed the new text as “a very good gloss on something that falls short”. 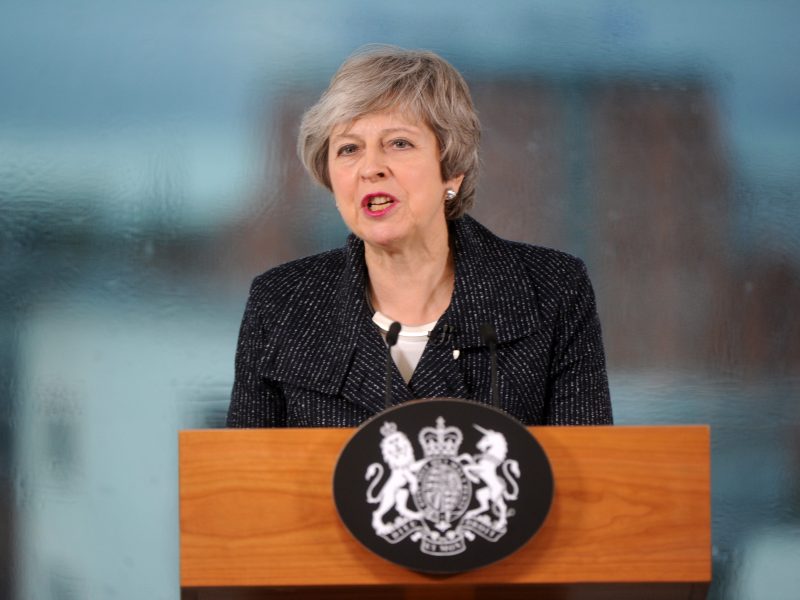 Rejecting Brexit deal would plunge UK into 'crisis', May warns

UK Prime Minister Theresa May warned lawmakers on Friday (8 March) that rejecting her Brexit deal next week would plunge the UK into crisis and could lead to it never actually leaving the EU.

Pleased with the agreement between @JunckerEU and @theresa_may. An orderly #Brexit is crucial for both the EU and the UK. I hope that the House of Commons will support the agreement reached by Theresa May. There is no alternative.