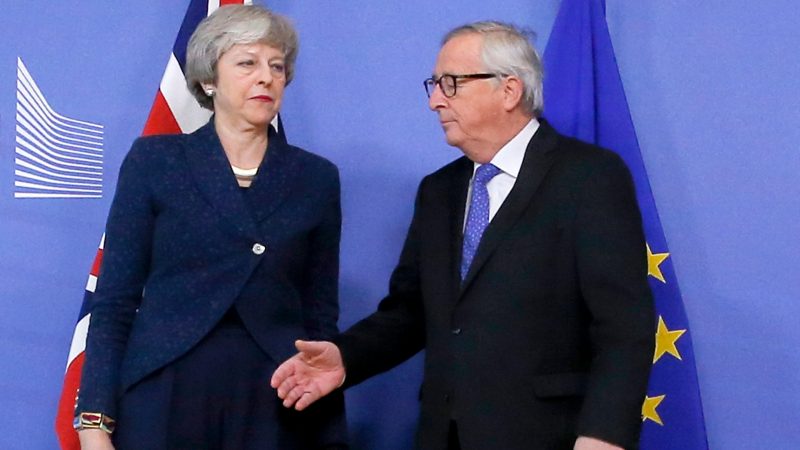 With Britain set to jolt out of the world’s biggest trading bloc in 37 days unless May can either persuade the British parliament or the European Union to budge, officials were cautious on the chances of a breakthrough.

The key sticking point is the so-called backstop, an insurance policy to prevent the return of extensive checks on the sensitive border between EU member Ireland and the British province of Northern Ireland.

May agreed on the protocol with EU leaders in November but then saw it roundly rejected last month by UK lawmakers who said the government’s legal advice that it could tie Britain to EU rules indefinitely made the backstop unacceptable.

She has promised parliament to rework the treaty to try to put a time limit on the protocol or give Britain some other way of getting out of an arrangement which her critics say would leave the country “trapped” by the EU.

A spokesman for May called the Brussels trip “significant” as part of a process of engagement to try to agree on the changes her government says parliament needs to pass the deal.

But an aide for Juncker quoted the Commission president as saying on Tuesday evening: “I have great respect for Theresa May for her courage and her assertiveness. We will have friendly talk tomorrow but I don’t expect a breakthrough.”

EU sources aired frustration with Britain’s stance on Brexit, saying Brexit Secretary Stephen Barclay brought no new proposals to the table when he was last in Brussels on Monday for talks with the bloc’s chief negotiator, Michel Barnier.

On Tuesday, the EU responded to UK demands again: “The EU 27 will not reopen the withdrawal agreement; we cannot accept a time limit to the backstop or a unilateral exit clause,” said Margaritis Schinas, a spokesman for Juncker.

“We are listening and working with the UK government … for an orderly withdrawal of the UK from the EU on 29 March.”

May’s spokesman again said it was the prime minister’s intention to persuade the EU to reopen the divorce deal.

“There is a process of engagement going on. Tomorrow is obviously a significant meeting between the prime minister and President Juncker as part of that process,” he said.

Barclay and Britain’s Attorney General Geoffrey Cox are also due back in Brussels midweek and want to discuss “legal text” with Barnier that would give Britain enough assurances over the backstop, British sources said.

It is Cox’s advice that the backstop as it stands is indefinite, which May is trying to see changed by obtaining new legally binding EU commitments.

May needs to convince eurosceptics in her Conservative Party that the backstop will not keep Britain indefinitely tied to the EU, but also that she is still considering a compromise idea agreed between Brexit supporters and pro-EU lawmakers.

May’s spokesman said the Commission had engaged with the ideas put forward in the so-called “Malthouse Compromise” but raised concerns about “their viability to resolve the backstop”.

The EU says the alternative technological arrangements it proposes to replace the backstop do not exist for now and so cannot be a guarantee that no border controls would return to Ireland.

Barnier told Barclay the EU could hence not agree to this proposal as it would mean not applying the bloc’s law on its own border.

Eurosceptic lawmakers said Malthouse was “alive and kicking” after meeting May on Tuesday.

May has until 27 February to secure EU concessions on the backstop or face another series of Brexit votes in the House of Commons, where lawmakers want changes to the withdrawal deal.

EU and UK sources said London could accept other guarantees on the backstop and the bloc is proposing turning the assurances and clarifications it has already given Britain on the issue in December and January into legally binding documents.

Both sides have said they want to avoid hard Brexit, and many experts foresee economic chaos, even warning of food and medicine shortages or a renewed threat of unrest in Northern Ireland.

Manufacturing supply chains could be disrupted, and Brexit uncertainty has already been cited as a contributing factor in the closure or departure of several British-based businesses.

Another option would be for Brussels to accord Britain an extension to the 29 March deadline, which is enshrined in British law.

But May’s government insists it will not request a delay, all 27 remaining members would have to agree and it would be legally difficult for Britain to remain in the EU for long.

Member states are obliged to hold polls between 23 and 26 May to elect a new European Parliament, which will start sitting from 2 July, presumably without any British members.

“Any decision to ask for more time lies with the UK. If such a request were to be made, no one in Europe would oppose it,” Juncker told the Stuttgarter Nachrichten this week.

“If you are asking for how long the withdrawal can be postponed, I have no timeframe in mind… But I find it hard to imagine that British voters would again vote in the European elections.”

May is due at the EU’s Berlaymont headquarters for her meeting with the Commission president at 6:30 pm (1730 GMT). The next day, British opposition Labour leader Jeremy Corbyn will meet Barnier.

One response to “May in Brussels again, seeking Brexit movement”