May and Juncker outlined the progress made on the three issues of citizens’ rights, the Irish border and the divorce bill, and agreed to move on to talks about the UK’s future relationship with the bloc, at a joint press conference at Commission headquarters on Friday morning.

Speculation that a deal had been reached mounted after Juncker’s chief of staff Martin Selmayr tweeted a picture of white smoke earlier on Friday morning.

The agreement will be passed on to the European Council and member states will decide whether or not to accept it in time for next week’s summit (14-15 December).

“The decision is now in the hands of the 27 heads of state and government,” Juncker said. “I am sure they will share our appraisal.” 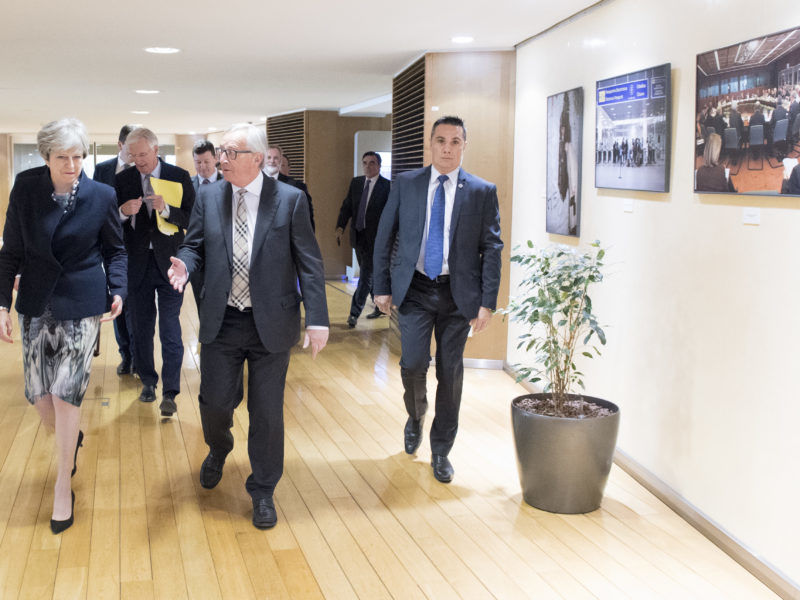 Irish Prime Minister Leo Varadkar said he was “surprised and disappointed” on Monday (4 December) after Britain failed to agree to a draft deal with EU leaders on the status of the Irish border after Brexit.

Under the deal struck, these rights would be protected by UK law, not the European Court of Justice. Read the text of the deal here.

On Ireland, Juncker said he had spoken first with Prime Minister Leo Varadkar then May on Thursday night in a bid to break a deadlock over the wording of a deal on future border arrangements.

“The peace process is a priority,” the Commission president said, adding that the EU would continue to support peace and reconciliation on the island.

“The EU27 stand firmly behind Ireland and the peace process,” he said.

May also hailed Friday’s agreement as “a significant improvement” on the version that was rejected by her Northern Irish coalition partners the Democratic Unionist Party earlier in the week.

She stressed that it had required “give and take on both sides” but that the deal to be put to the European Council was “a hard-won agreement in all our interests”.

Juncker highlighted that today’s announced breakthrough does not constitute a final deal, but a step along the road: “Let me be clear: we still have a lot of work to do. This is not the withdrawal agreement.”

Tusk says the hardest is still to come

Following May and Juncker’s joint press conference, European Council President Donald Tusk made a statement at 9:00 am.

He agreed that sufficient progress had been made and said he would recommend to the EU’s 27 heads of state and government that they move Brexit talks on to the second phase concerning the UK’s future relations with the EU and the two-year transitional period after it leaves the bloc in March 2019.

“We are ready to discuss a two-year transition period but we have our conditions,” he said.

During a transition period, Tusk insisted that the UK would have to respect the whole of EU law, including any new laws, the EU budget, judicial oversight and any related obligations.

“And decision-making will continue between the EU27 without the UK,” he added. “This is the only reasonable solution.”

Tusk said he was satisfied with Friday’s agreement, which he described as “a personal success for Theresa May”, but warned that “the most difficult challenge lies ahead”.

The two sides now have less than a year to close a deal on the UK’s future relationship with the EU.