With just over 100 days until Britain is due to leave the bloc, May faced accusations from some lawmakers that she was trying to force a deeply divided parliament into backing her deal by running the clock down to exit day.

As the 29 March departure date nears, a mid-January vote could force lawmakers to make a decision between her deal or leaving without one, a nightmare scenario for many businesses.

The leader of the opposition Labour Party sought to turn up the pressure by lodging a motion of no confidence in May after she delayed a vote by lawmakers on her Brexit plan.

“This is unacceptable in any way whatsoever,” Jeremy Corbyn said in the House of Commons.

While a vote of no confidence in May would be non-binding, it could add to the sense of crisis as lawmakers step up their attempts to make her change course.

The vote of no confidence could come as soon as Tuesday, the deputy political editor of the Daily Telegraph said on Twitter.

But some Conservative Party lawmakers, who want a more definitive break from Brussels and challenged her leadership last week, said they would not support Labour’s vote. Similarly, a Northern Irish party which props up May but opposes her on Brexit would not back Labour, its deputy leader said.

May is pressing on with her deal to leave the EU, rejecting calls for a second referendum or to test support for different Brexit options in parliament, despite hardening opposition to the agreement to maintain close ties.

May said parliament would debate the deal in January, before a vote in the week beginning 14 January – more than a month after an original 11 December vote which May cancelled after admitting she faced a significant defeat.

After a tumultuous week in which she survived a confidence vote and sought last-minute changes to a Brexit agreement reached with Brussels last month, May said again that the choice was her deal, leaving without an agreement or no Brexit at all. 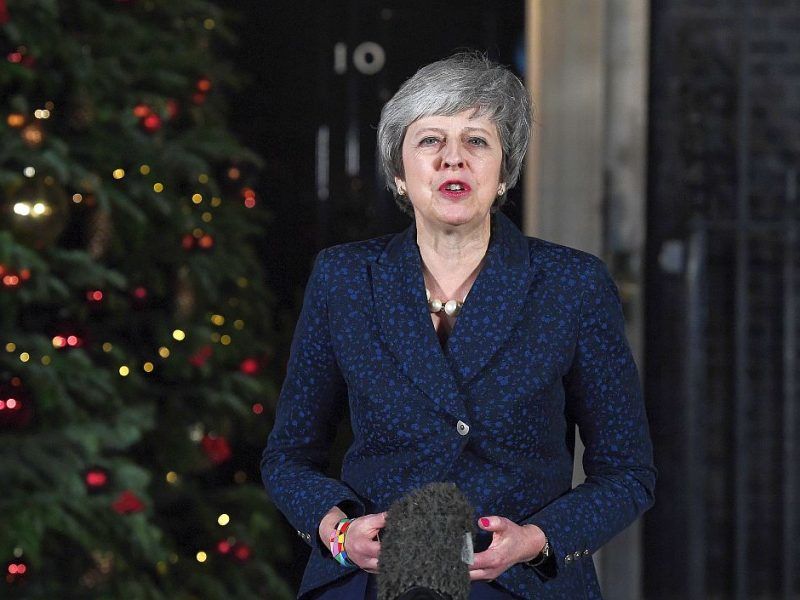 Prime Minister Theresa May survived a no-confidence vote on Tuesday night (12 December) but it came at a heavy price, as she lost the support of nearly 40% of her Conservative MPs and the opposition hinted it may soon mount its own challenge against her.

“I know this is not everyone’s perfect deal. It is a compromise. But if we let the perfect be the enemy of the good then we risk leaving the EU with no deal,” she told lawmakers, her speech punctuated by loud shouts of protest.

“Avoiding no deal is only possible if we can reach an agreement or if we abandon Brexit entirely.”

She said the EU had offered “further clarification” on the most contentious aspects of the withdrawal agreement and her government was seeking “further political and legal assurances”.

But with the EU unlikely to offer concessions that would win over lawmakers, more politicians are backing a second referendum – something some of her ministers say could be avoided if the government tested Brexit scenarios in parliamentary votes.

“What is irresponsible is delaying a vote on her agreement, not because she is going to get any changes to it but because she wants to run down the clock and try and intimidate MPs into supporting it to avoid no deal,” opposition Labour lawmaker Liz Kendall said in parliament.

Parliament is deeply divided, with factions pressing for different options for future ties, exiting without a deal or remaining in the EU.

May and her ministers have repeatedly ruled out a replay of the referendum, saying it would deepen rifts and betray voters who backed Brexit by 52% to 48% in 2016.

That increases the risk of a no-deal Brexit, a scenario some businesses fear would be catastrophic for the world’s fifth largest economy.

The political and economic uncertainty over Brexit is having an impact, with data on Monday showing a drop in consumer spending, falling house prices and growing pessimism in household finances.

Labour’s Corbyn said May was the architect of a constitutional crisis, “leading the most shambolic and chaotic government in modern British history”.

Several ministers, including Education Minister Damian Hinds, have said they are open to putting the range of options to parliament to see if there is a majority for any of them.

Asked if he would rule out a so-called indicative vote, May’s spokesman said: “There are no plans to hold one.”

The prime minister used her statement in parliament on Monday to reject the idea of a second referendum and to again argue that her agreement to keep close economic ties with the EU after Brexit is the only one on offer.

“Let us not break faith with the British people by trying to stage another referendum,” May said.

One response to “May to bring Brexit deal back to parliament, rejects second referendum”