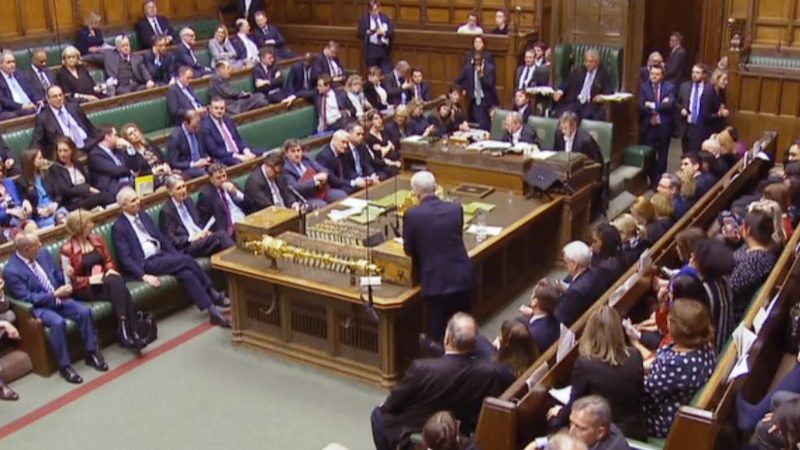 Brexit vote at parliament in London

MPs voted by 412 to 202 to delay Brexit on a third consecutive day of voting in Westminster.

However, it is still unclear how long the requested extension will be because the prime minister intends to hold a third vote on her twice rejected Withdrawal Agreement.

The motion adopted by UK lawmakers states that if the Brexit plan is agreed by 20 March, the UK will request a “technical extension” until 30 June. If not, the motion states that the extension would likely be a much longer period, possibly up to two years, with the UK taking part in European elections in May.

The request is set to be discussed at next week’s European Council summit.

Once again, the vote revealed the deep splits in the governing Conservative party.  Only 112 Tory MPs, including May and most of her ministers, voted for an extension, while Brexit Secretary Stephen Barclay was among eight cabinet ministers to vote against a delay.

Meanwhile, an attempt by MPs to take control of the Brexit negotiations away from the May government was narrowly defeated by 314 to 312.

May signalled earlier that she would once again put her Brexit deal to a vote next Tuesday. On Tuesday, lawmakers defeated the Withdrawal Agreement and Political Declaration agreed by May and EU leaders in November by a hefty 149 majority.

The EU gave a guarded response to the vote, with a Commission spokesman stating only that “we take note of tonight’s result”.

Although most member states are thought to be willing to grant an extension, many diplomats say that they will only support it if the UK changes its negotiating strategy or holds a general election or a new referendum.

Speaking in Budapest, EU chief negotiator Michel Barnier refused to comment on the extension request, noting that it was “up to the member states to decide”

“If the UK still wants to leave and wants to do it in an orderly manner”, he said, “this treaty is the only available option”

But he also rejected claims made by some Brexiteers that the EU had shown bad faith during the Article 50 negotiations.

“I will remain patient, calm and respectful towards the UK, its people and this legislative and parliamentarian process,” he added.

UK lawmakers are slowly starting to whittle down the different potential Brexit options, having ruled out the prospect of a ‘no deal’ Brexit on Wednesday.

An amendment calling for a second referendum was heavily defeated after the opposition Labour party instructed its MPs to abstain, although in a further confusing plot twist, Labour leader Jeremy Corbyn then told MPs that his party had not abandoned the prospect of another plebiscite.

“I also reiterate our support for a public vote not as political point-scoring but as a realistic option to break the deadlock,” he said.