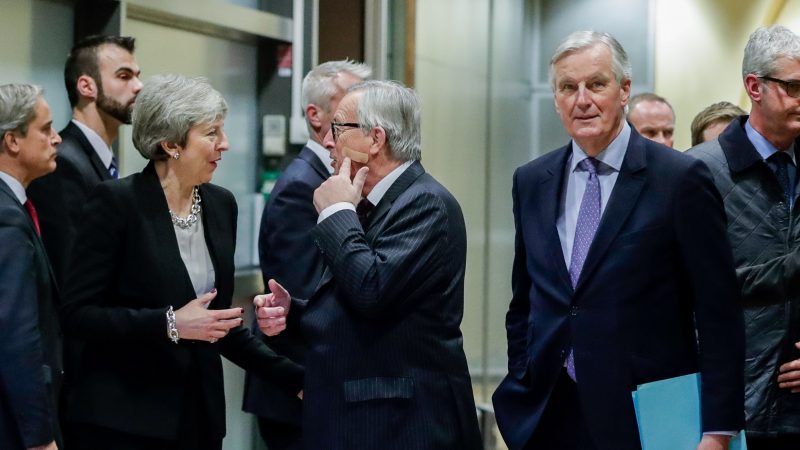 British Prime Minister Theresa May (L) is welcomed by European commission President Jean-Claude Juncker (C) and Chief Negotiator Task Force for the Preparation and Conduct of the Negotiations with the United Kingdom under Article 50 Michel Barnier (R) ahead to a meeting on Brexit in Brussels, Belgium, 20 February 2019. [Stephanie Lecocq/EPA/EFE]

Theresa May’s government is hoping to avoid a three day marathon of voting next week that could pave the way for a ‘no deal’ scenario or delay to Brexit.

The government is expecting the House of Commons vote on 12 March to be very close and UK officials say they are seeking to build a “sustainable” majority both on the ‘meaningful’ vote on the Withdrawal Agreement and to pass the legislation that will accompany it.

UK government officials believe that the attitude of Brexiteers to the Withdrawal Agreement is softening, pointing to remarks from Jacob Rees-Mogg, who leads the backbench European Research Group, that he would support the deal if there is an ‘appendix’ clarifying the status of the controversial Irish backstop. 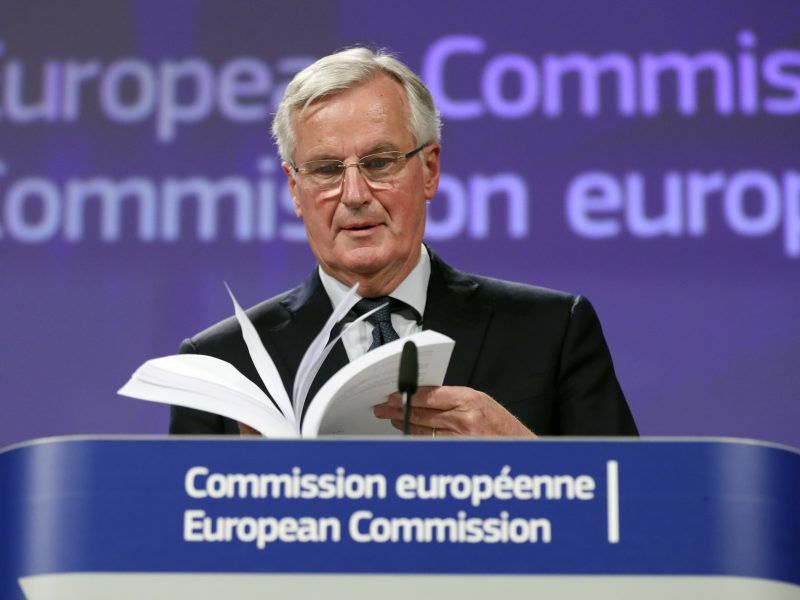 The threat of an extension to Article 50 and of Brexit being delayed are also thought likely to persuade many Conservative rebels to drop their opposition to the draft agreement.

On 15 January, MPs voted down the draft deal agreed by Theresa May and EU leaders in November by a 432 to 202 majority, with the vote marking the biggest rebellion against a government since the 1920s. 118 Conservative MPs voted against May’s government.

Although most of the negotiations have been led by May and her adviser Olly Robbins, Attorney General Geoffrey Cox has emerged as a key figure in recent weeks. Cox was in Brussels on Tuesday (5 March) for talks that UK officials describe as being in the ‘live’ phase.

A High Court barrister who took a hefty pay cut to become the UK’s chief legal officer in July last year, Cox’s legal advice on the Withdrawal Agreement, and the status of the Irish backstop in particular, will be crucial to how Tory MPs vote.

“The AG being able to say that the backstop is not indefinite is what gets it over the line,” says one Whitehall official.

Privately, May’s team are resigned to the fact that the ‘alternative arrangements’ demanded by Conservative MPs last month will not be part of the Withdrawal Agreement, but insist that further guarantees on the backstop will be needed.

A letter by Jean-Claude Juncker and Donald Tusk in January, stressing that the EU does not want to see the backstop actually utilised and that it “would only apply temporarily”, will need to be bolstered by some form of legal guarantee, they say.

“The provisions of the backstop are not being discussed… What’s unacceptable is the mechanism,” said the official.

In Westminster, May’s team have also sought to persuade Labour MPs, particularly those representing ‘Leave’ voting constituencies to back her deal, by promising not to change EU labour or environmental standards.

The government has also offered the prospect of a £1.6 billion fund for deprived areas of the UK, most of which voted Leave.

The UK has not sought the views of other member states about granting an extension to Article 50, EURACTIV understands, but officials are confident that a short-term extension would be quickly agreed by EU member states.

Another issue clouding the horizon is that the UK has until mid-April to decide whether it will pay into the 2019 EU budget. Annual budget contributions will continue until the end of 2020, under the 21 month transition period that is envisaged in the withdrawal deal.

However, there are no such guarantees in a no-deal scenario and May would come under huge pressure from her own party to withhold payment if the UK crashes out of the bloc on 29 March.

“A lot of people would take quite a lot of convincing that we should have to pay,” the official warned.