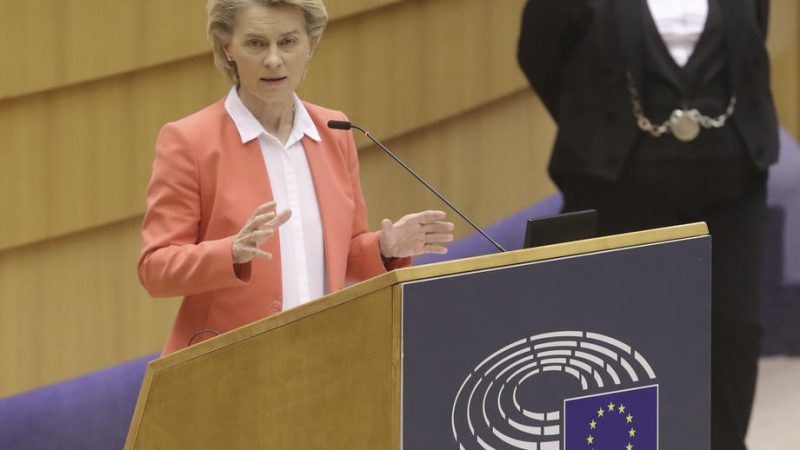 The bruises left by the Brexit process were evident on Tuesday (27 April) even as EU lawmakers endorsed the trade deal that now governs economic relations between the UK and EU, almost five years after the UK voted to leave the bloc. EPA-EFE/OLIVIER HOSLET

The bruises left by the Brexit process were evident on Tuesday (27 April) even as EU lawmakers endorsed the trade deal that now governs economic relations between the UK and EU, almost five years after the UK voted to leave the bloc.

Speaking in the European Parliament, Michel Barnier, the EU’s chief Brexit negotiator, conceded that the UK’s departure from the bloc was “a failure of the European Union and we have to learn lessons from it.”

“Brexit represents the great lie of the British right,” said Iratxe García Pérez, president of the socialists and democrats (S&D) group in the European Parliament.

At the start of the debate, European Commission President Ursula von der Leyen said the EU-UK Trade and Cooperation Agreement “comes with real teeth, with a binding dispute settlement mechanism”.

The EU has already begun the process of taking legal action against Boris Johnson’s government over its plans to unilaterally extend the grace periods during which many products travelling from Britain to Northern Ireland are exempted from checks. The UK, for its part, has demanded that the Northern Ireland Protocol, which ensures that there is no hard border between the province and the Republic of Ireland, be adjusted following complaints from businesses and Northern Ireland’s Unionist community.

The result of the vote will be revealed on Wednesday morning but the Parliament vote was widely seen as a formality and is expected to see the Trade and Cooperation Agreement pass with a large majority.

Agreed on Christmas Eve, the TCA was passed by the UK parliament on 31 December but has been operating provisionally in the EU since January pending formal ratification. Relations between Brussels and London remain strained. The EU requested a two month extension to the initial end of February deadline in the wake of the row over the application of the Northern Ireland protocol.

The agreement covers tariff and quota free trade in goods but imposes customs checks and new paperwork at the border which have already disrupted trade. EU-UK trade flows are significantly down on last year, although this is also partly the result of the COVID-19 pandemic.

David McAllister, the German chair of the Parliament’s Foreign Affairs committee, told reporters that while “Brexit is, and will always be, a lose-lose situation,” the trade accord would minimise the damage and “puts our future partnership on a solid legal basis”.

He added that the withdrawal agreement which took the UK out of the bloc last January, “must be respected and faithfully implemented”.

However, other tensions remain. French Europe Minister Clément Beaune has accused the UK of blocking fishing rights for his country’s fishing community and warned that the EU could respond with “reprisals” by blocking the UK’s access to markets in financial services.

Christoph Hanssen, one of the Parliament’s co-rapporteurs on the trade accord, warned that approval of the trade pact “should not be seen as a blank cheque for the UK government… but rather as an insurance policy for us.”

He also pointed out that the trade pact had tied respect of European access to fishing waters to the UK’s access to the EU energy market, and gave the European Commission the right to impose sanctions in case of non-compliance.

“It is a mistake but we have to make the best of it,” noted fellow co-rapporteur, Andreas Schieder, who added that by MEPs approving the trade deal “Brexit comes to an end politically”.