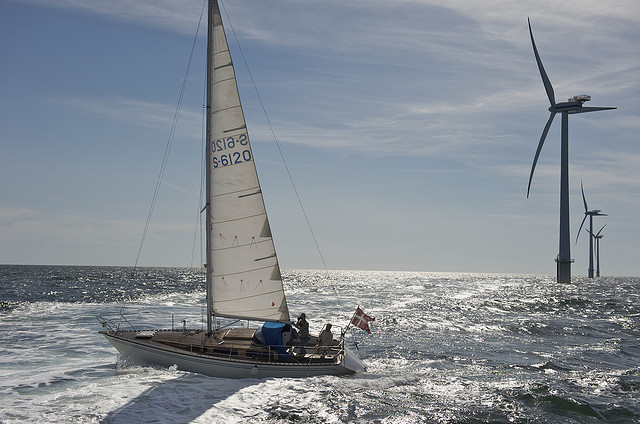 The North Seas Grid project has fresh wind in its sails. [The Danish Wind Industry/Flickr]

The North Seas Grid should be one of the building blocks of the Energy Union, companies and campaigners have told EU energy ministers, as momentum builds behind the project connecting offshore wind farms in ten countries.

Environmental think tank E3G today (9 April) separately called for ministers and the European Commission to work together to bring rapid agreement on a new way of coordinating nations to deliver the electricity infrastructure investment needed.

The grid would boost interconnection and renewables capacity, fight climate change and bolster energy security, which are the central goals of the Energy Union, E3G said.

Members of the European Parliament have backed the project, which will connect Ireland, Scotland, the UK, France, Belgium, Netherlands, Germany, Denmark, Sweden and Norway.

In 2014, there were seven billion-dollar financings of offshore wind projects in the North Sea, funded by the Netherlands, the UK and Germany. It included the 600MW Gemini project in Dutch waters, which at €4.1 billion was the largest non-hydro renewable energy plant to get the go-ahead anywhere in the world.

The booming offshore sector stands in stark contrasts to renewables investments in Europe last year, which grew by less than 1%, according to the United Nations Environment Programme’s (UNEP) annual Global Trends in Renewable Energy Investment report.

Maroš Šef?ovi?, Commission Vice-President in charge of Energy Union, has also signalled his support for the network.

“I think it is one of the most impressive projects I’ve seen in long time,” he told EURACTIV, before citing the region’s favourable conditions such as regulatory stability.

“I would really see it as an example for the future and I would say the pattern is one we have to study very closely and maybe use more widely [throughout the EU],” he added.

Maria Donnelly, the European Commission’s director of Energy, has said she wants the grid prioritised when the Netherlands holds the rotating Presidency of the EU, in 2016.

Speaking last month, she said she wants the grid prioritised when the Netherlands holds the rotating Presidency of the EU in 2016.

Interconnectivity is a vital part of realising the Energy Union, a blueprint to bolster the bloc’s resistance to energy shortages. Interconnections means surplus power in one area can be moved to make up shortfalls elsewhere.

The plans include a target for interconnection of cross-border electricity grids across borders of at least 10% of a nation’s power generation capacity by 2020.

But offshore wind companies are concerned there is not enough political support from member states to get results and to deliver investment at the lowest cost possible.

Jonathan Gavanta, associate director of E3G, said, “This is an ideal opportunity to put a new political impetus behind strategic energy cooperation to develop the North Seas Offshore Grid.”

The letter called for the Informal Energy Council to endorse the grid as a key focus for enhanced regional cooperation, as part of the Energy Union.

A multi-country investment platform for the North Sea should be discussed by the ministers. It would increase the visibility of the project pipeline, attract private and institutional investors, and enable a lower cost of capital, the letter said.

Industry is concerned that while arrangements such as the Baltic Energy Market Interconnection Plan were specifically cited in the Commission’s Energy Union communication, the North Seas Countries Offshore Grid Initiative was not.

The initiative has facilitated collaboration across the North Sea since 2009 and there is a well-developed investment pipeline of over €100 billion by 2030, industry said.

The project has won cross-party support from MEPs. Scottish Conservative Ian Duncan and Bas Eickhout hosted an event in March promoting the plan.

10% of Europe’s electricity could be generated from wind blowing across the North Sea but without interconnection between Ireland, Scotland, the UK, France, Belgium, Netherlands, Germany, Denmark, Sweden and Norway, much of that will be lost, they wrote in EURACTIV.

Today (9 April), Duncan said the 2016 Dutch Presidency was the perfect opportunity to stop talking and start delivering. It was vital that the ten ministers backed the grid, he added.

“If we are to make progress toward a common electricity market, with reduced costs and lower bills for consumers and industry then we have to act now,” said Duncan.

“We have an opportunity to connect up our domestic grids, which in the short term will provide jobs in construction and in the long term in maintaining the cables. Such opportunities would inject a much needed lift to many ports struggling with the economic downturn.”

The Energy Union will cut across a number of policy sectors including energy, transport, research and innovation, foreign policy, regional and neighbourhood policy, trade and agriculture, according to the EU executive's plans. Plans for the Union have developed beyond questions of security of supply to encompass issues such as fighting climate change.

The 10% interconnection target is a central part of the Commission’s Energy Union package of proposals. Interconnectivity – of both gas and electricity grids – is seen as a key for EU member states to wean off their dependence on Russian gas and manage higher shares of variable energy sources.

The 10% interconnection target can hardly be seen as new, having already been decided by EU leaders over a decade ago, in 2002. However, the target has remained elusive.

North Sea countries announced plans in December 2009 to cooperate on building a North Sea grid that could cost up to €30 billion, according to European Wind Energy Association (EWEA) estimates. European offshore wind capacity could increase to 40GW by 2020, predicts EWEA.

The ultimate vision is a European 'supergrid' to provide supplies of renewable energy throughout the continent by tapping into vast solar resources from the Mediterranean and wind from the North.

However, the development of 'smart grids' at local distribution level will be crucial to reducing peaks in electricity demand, in order to ease pressure on the grid and increase its capacity to host renewable and distributed electricity sources.