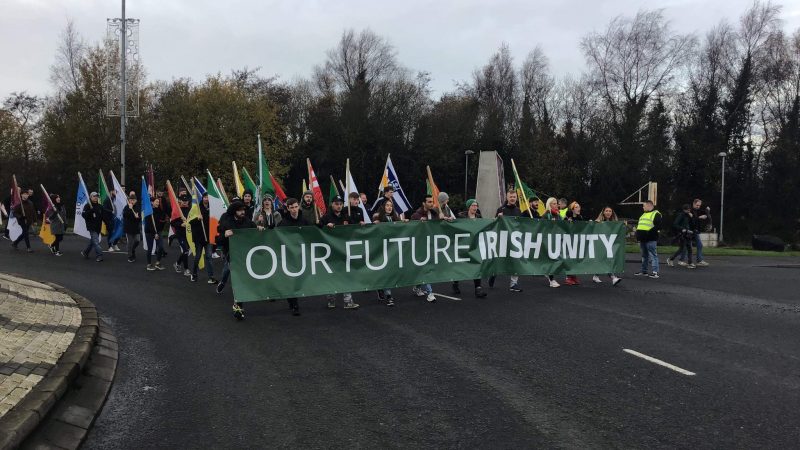 Across Northern Ireland, Sinn Fein billboard says that "Irish unity" is "the solution to Brexit". [Twitter]

A century after its fraught foundation, Northern Ireland looks set for a constitutional earthquake this week with the pro-Irish party Sinn Fein on course to win regional elections.

Apart from periods of direct rule by London, pro-UK unionists have monopolised power ever since Britain carved out a Protestant-majority statelet in 1921, when the rest of Ireland achieved self-rule.

But pollsters expect victory on Thursday for Sinn Fein, which was once the political arm of the paramilitary IRA, in polls for the devolved assembly in Belfast.

The party took the deputy leadership in a power-sharing deal with unionists when Northern Ireland achieved peace in 1998, after three decades of sectarian bloodshed.

Across the province, high streets and junctions are festooned with election posters. In Newry, near the border with Ireland, a Sinn Fein billboard says that “Irish unity” is “the solution to Brexit”.

“There has been a seismic change in society, particularly in the aftermath of Brexit, something that we didn’t vote for, but which has been foisted upon us,” said Sinn Fein leader Michelle O’Neill.

But the party is downplaying the prospect of a united Ireland anytime soon, wary of alienating centrist voters and moderate unionists whose focus is on healthcare, education and a UK-wide cost-of-living crisis.

Sinn Fein is averaging a poll lead of six to seven points over the Democratic Unionist Party (DUP), which puts the republican party on track to take the post of first minister in the devolved government.

But the administration cannot function unless the second-ranked party agrees to share power — and it remains to be seen if the DUP will commit to a once-unthinkable step for the Protestant unionist camp.

In DUP leader Jeffrey Donaldson’s Lagan Valley constituency, the unionist’s face beams out from the red, white and blue of the UK flag.

A red “number one” urges voters to pick Donaldson as their first choice under Northern Ireland’s voting rules, which give voters the chance to rank candidates in order of preference.

The DUP has been agitating for London to scrap a trade protocol with the European Union, afraid that Northern Ireland’s status in the UK is being eroded by the post-Brexit arrangements and by Sinn Fein’s rise.

The party walked out of the assembly this year in protest at the “Northern Ireland Protocol”, and the UK government says it is ready to scrap the pact unless Brussels agrees changes.

The DUP, riven by infighting and watching warily an even more hardline party to its right, has been striking ever-more strident warnings that the protocol poses an existential threat for the union.

“When is the government and my prime minister going to restore our place in the United Kingdom?” DUP lawmaker Jim Shannon asked Boris Johnson in parliament last week.

Brexit — which a majority in Northern Ireland voted against — has frayed the carefully stitched compromises that were integral to the 1998 Good Friday Agreement.

The peace deal saw London and Dublin agree to hold a cross-border referendum on whether all of Ireland should reunite, if there was popular support for one.

But how to define popular support was left deliberately vague — and whether a Sinn Fein victory this week reaches the threshold is unclear. The DUP argues the threat exists, as it tries to rally its base.

Sinn Fein is also riding high south of the border and hopes to break the historic grip on power of Ireland’s two biggest parties at the next general election, which is due by 2025 but could come sooner.

While Northern Ireland’s unionist and nationalist camps square off, polls suggest the unaligned centre ground is also set for significant gains on Thursday.

Alliance Party leader Naomi Long said “the days of designations are over”, arguing: “It is time that this pantomime around the first and deputy first minister office was brought to an end.”

Alliance and two other small parties collectively held 11 of the 90 seats in the outgoing assembly.

“If they come back with 16, 17, 18 MLAs (Members of the Legislative Assembly), that could provoke a fundamental renegotiation of the Good Friday Agreement,” David McCann, a commentator for the political website Slugger O’Toole, told AFP.

Jacqueline Hirst, a lifelong unionist voter living in the port town of Larne, said she was voting Alliance for the first time.

The 52-year-old civil servant said she was concerned about the EU protocol’s impact on trade, after noticing “a lot of things in the supermarket disappear already”.

But these concerns were secondary to dysfunction at Stormont sparked by long-running feuds between Sinn Fein and the DUP.

“We have to talk, and that’s the only way we’re going to get any further,” Hirst said.