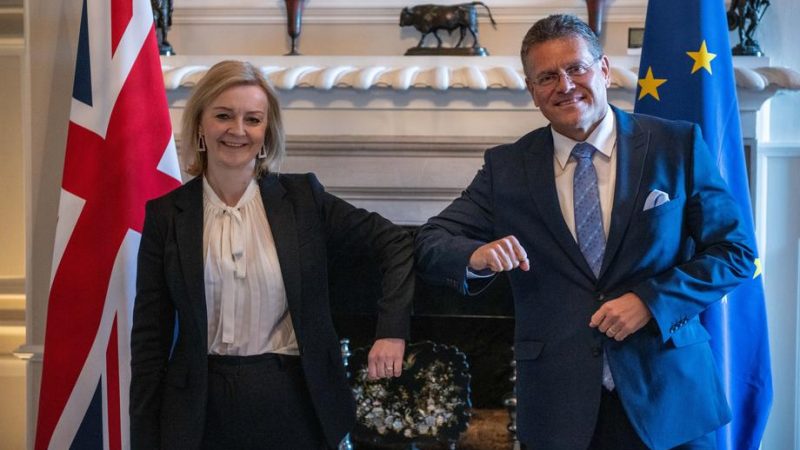 Talks between the EU and UK aimed at resolving the status of the controversial Northern Ireland protocol appear to be on the brink of collapse, after London warned on Thursday (12 May) that it would ‘have no choice but to act’. [EPA-EFE/Chris J. Ratcliffe/Pool]

Talks between the EU and UK aimed at resolving the status of the controversial Northern Ireland protocol appear to be on the brink of collapse, after London warned on Thursday (12 May) that it would ‘have no choice but to act’.

In a statement following the call on Thursday, the UK said that “if the EU would not show the requisite flexibility to help solve those issues, then as a responsible government we would have no choice but to act.”

The protocol was negotiated and agreed by the EU and UK as part of the latter’s exit from the EU in order to avoid a hard border on the island of Ireland. However, its implementation of customs checks on British exports to Northern Ireland is bitterly opposed by the Unionist community which argues that the protocol has separated Northern Ireland from the rest of the UK single market by creating more checks and paperwork.

Sir Jeffrey Donaldson, the leader of the Democratic Unionist Party, the second-largest party in the Northern Ireland assembly, whose party’s support is needed for a new devolved government in Belfast to take office, said earlier this week he will not nominate ministers unless Boris Johnson’s government takes “decisive action” on the Northern Ireland protocol.

During the call with Šefčovič on Thursday, Truss said that the protocol was “the greatest obstacle” to the formation of a new government in Belfast.

Reports have suggested that Johnson’s government has been working on domestic legislation that would scrap the requirement for customs checks on goods travelling from Britain to Northern Ireland, one of the provisions in the protocol, and could be ready to present it to the Westminster parliament in the coming weeks.

On Thursday, the UK government’s Attorney General cited legal advice that it would now be lawful to override parts of the Brexit arrangements for Northern Ireland, pointing to increased political instability and a recent hoax bomb attack on Irish foreign minister Simon Coveney as justification for acting.

Vice President Šefčovič confirmed that there was no room to expand the EU’s negotiating mandate.

“It continues to be of serious concern that the UK government intends to embark on the path of unilateral action,” said Šefčovič in a statement following the call.

He said that the UK had not yet responded to “a series of wide-ranging and impactful solutions proposed by the EU” which would “substantially improve the way the protocol is implemented”.

The UK choosing to override the protocol would “undermine the conditions which are essential for Northern Ireland to continue to have access to the EU single market for goods,” Šefčovič added, hinting that breaking the protocol could result in trade sanctions.