No EU plan to undermine UK on oversight of bankers’ bonuses 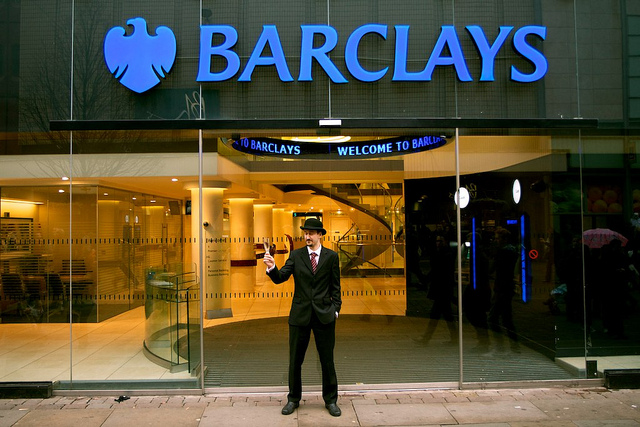 A British protester outside a Manchester branch of Barclays Bank in 2011. [v4bob4v/Flickr]

A decision to remove oversight of bankers’ pay from the European Commission’s financial services portfolio was made before the United Kingdom’s Jonathan Hill was nominated for the post, officials said on Friday (26 September).

The UK is fighting plans to introduce absolute limits on bonuses, fearing their impact on the City of London, Europe’s main financial centre.

But Juncker spokeswoman Natasha Bertaud told reporters today that while oversight of financial pay would move to the Commission’s justice department, responsibility for the relevant regulations, the revised Capital Requirements Directive, would remain under Hill’s authority.

She noted that the information about Hill’s remit has been available publicly since 10 September.

The article said it was also a political decision to avoid problems with Hill’s confirmation in the European Parliament, which must vet each nominee. Some members of the parliament had expressed disquiet at the granting of the financial services brief to the British commissioner.

Juncker, who takes office in November, has sought to shake up the structure of the EU executive that helps shape policy for the bloc’s 500 million citizens, to try to deal with issues such as economic stagnation and Britain’s future in the European Union.

Officials close to Juncker said the decision to move oversight of pay to the EU’s justice portfolio was made before Hill was offered the post of EU commissioner for financial stability, financial services and capital markets union.

They said Juncker decided that oversight of financial sector pay was better handled by the justice commission, because that directorate already handles other corporate issues such as contract law.

Politicians have been trying to crack down on generous bonuses in financial services following the financial crisis, blaming such incentives for encouraging the excessive risk-taking that nearly bankrupted the financial system.

The European Union has a new rule that limits bonuses to no more than annual salary, or twice that with shareholder approval. It will apply to awards handed out from early 2015.

Capping bankers' bonuses in the EU has been on the European Commission's agenda since the onset of the financial crisis.

The European Union has a new rule that limits bonuses to no more than annual salary, or twice that with shareholder approval. It will apply to awards handed out from early 2015.

Britain launched a legal challenge to the European Union's cap on bankers' bonuses which London fears will hurt its financial industry.