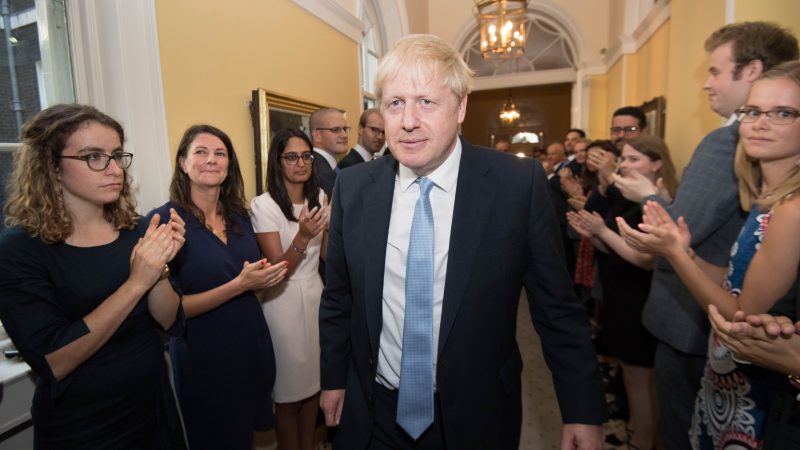 epa07737853 Prime Minister Boris Johnson is clapped into 10 Downing Street central London, Britain, 24 July 2019 by staff after seeing Queen Elizabeth II and accepting her invitation to become Prime Minister and form a new government. Former London mayor and foreign secretary Boris Johnson is taking over the post after his election as party leader was announced the previous day. Theresa May stepped down as British Prime Minister following her resignation as Conservative Party leader on 07 June. EPA-EFE/Stefan Rousseau / POOL

Nobody can accuse Boris Johnson of playing it safe. Having promised to deliver Brexit on October 31 ‘do or die’, his first move as Prime Minister was to appoint a cabinet in which all members have signed up to his plan to take the UK out of the EU on ‘no deal’ terms if necessary.

In his first hours as Prime Minister after being elected by Conservative party members as their new leaders, Johnson ruthlessly sacked most of the ministers in Theresa May’s cabinet who had not already resigned. In total, 17 of May’s most senior ministers were sacked or resigned on Wednesday (24 July).

Chief among them was Jeremy Hunt, who stood against Johnson for the leadership, and was sacked after refusing to accept demotion from the Foreign Office to Defence.

Despite his promises to ‘unite’ the UK, this a death or glory cabinet, that brings together most of the leading figures in the Vote Leave campaign, but alienates Tory moderates.

It is a dramatic gamble.

Dominic Raab, a Vote Leave stalwart who served a few months as an undistinguished Brexit Secretary in 2018, has been rewarded with the Foreign Office, and the status of Johnson’s de facto deputy. Priti Patel becomes new Home Secretary, Theresa Villiers, is the new environment secretary, and Andrea Leadsom becomes business secretary. Michael Gove, who nixed Johnson’s plans to replace David Cameron as Prime Minister after the 2016 referendum, but was a senior Vote Leave official, has a senior post.

One of the few pieces of continuity is Stephen Barclay staying on as Brexit Secretary, a slight surprise since many observers thought Johnson would either scrap the Exiting the EU department or re-brand it to focus on ‘no deal’ preparations.

Among the backroom staff, Dominic Cummings, the controversial strategist who masterminded the Vote Leave campaign in 2016, and was later found to be in contempt of Parliament, will be one of Johnson’s chief advisors in Downing Street.

Brexiteers are delighted. This is the government of hard Brexiteers that they wanted. It is also the UK’s most right-wing and socially conservative in living memory. Patel has publicly supported the return of the death penalty in the past.

But most observers around Westminster were shocked at the scale of the ministerial turnover, the lack of experience of those given top jobs, and the fact it looks as though the campaign for the next general election (or second referendum) has now begun.

The presence of several thousand anti-Brexit protestors gathered outside Downing Street underscored just how divided the UK is, and how divisive a figure Johnson is as Prime Minister.

Few around Westminster do not expect an election before the end of the year. The Conservatives only have a majority of four, including the support of the ten Democratic Unionist Party MPs, and that is likely to fall to two if, as expected, it loses a by-election to the Liberal Democrats next week.

Meanwhile, with at least 30 Conservative MPs having voted against a ‘No Deal’ scenario, and more MPs left disgruntled or sacked in the reshuffle, it is unlikely that a Johnson government will be able to survive for long before losing a confidence vote.

Johnson will effectively have six weeks over the summer holiday season to persuade the EU to re-open talks and secure the outline of a deal, before the House of Commons returns for a two week window in early September.

Dominic Grieve, the pro-Remain former attorney-general who has led the battle against a no-deal Brexit, told Sky News that Johnson was “a charlatan”.

“I don’t share his optimism about his opinion of himself,” he added.

Giving his first address as Prime Minister, Johnson set out a short-list of social policy targets, including plans to hire 20,000 police officers, 20 new hospital upgrades, and increase school spending per pupil, before doubling down on his promises to Conservative party members on Brexit.

The UK would leave the EU on October 31 “no ifs or buts,” he said, adding that “we will do a new deal, a better deal that will maximise the opportunities of Brexit while allowing us to develop a new and exciting partnership with the rest of Europe based on free trade and mutual support”.

The new Brexit deal would be “without that anti-democratic backstop,” said Johnson.

However, he did concede that the UK should “prepare for the remote possibility that Brussels refuses any further to negotiate and we are forced to come out with no deal”.

The trouble for Johnson is that a ‘no deal’ Brexit is not, as he said, a “remote possibility” but near certainty if the EU holds its ground.

In a statement following its own meeting on Wednesday following a meeting with Michel Barnier, the EU’s chief Brexit negotiator, the European Parliament’s Brexit Steering committee repeated that the Withdrawal Agreement struck with Theresa May would not be re-opened.

It was “open, however, to consider changes to the Political Declaration, in particular if such changes provided for much greater detail and a more ambitious future EU-UK partnership such that deployment of the Irish backstop would not be necessary.”

In the meantime, Johnson has opened up the prospect of a snap election in the autumn on whether the UK should leave on ‘no deal’ terms.

A no deal Brexit would be the EU’s fault, he implied, and, if the UK left without agreement, it would keep “the extra lubrication of the £39 billion” divorce settlement.

“Never mind the backstop – the buck stops here,” Johnson told reporters. After three years of sniping at Theresa May, Johnson and his party have an unequivocally Vote Leave government. The final, decisive fight over its EU exit plans is about to begin.

5 responses to “Johnson purges the no deal non-believers”