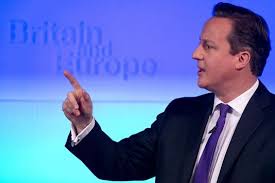 British voters are pessimistic about Prime Minister David Cameron’s ability to achieve reforms to the European Union that he believes are crucial to persuading Britain to stay in the bloc, a new poll found on Sunday (29 June).

Some 42% of respondents surveyed by YouGov do not believe the EU will be prepared to hand back any powers to member states, and another 29% think any concessions won by Britain will only be minor.

Cameron has pledged to renegotiate Britain’s terms of membership with the EU before holding a referendum on whether to leave or stay in the block in 2017.

He hopes that reform will persuade eurosceptic voters to stay in the EU, but admitted that his failure last week to block the appointment of Jean-Claude Juncker as head of the bloc’s executive arm made his job harder.

Cameron had waged a very public campaign against Juncker, arguing he was too much of a Brussels insider to push through change, but was outvoted by fellow EU leaders by 26 to 2 at a summit on Friday.

The YouGov poll was conducted before the vote on Thursday but it was clear by then that Cameron had failed to secure enough allies and was heading for defeat.

Some 36% of respondents said the prime minister’s opposition to Juncker would damage Britain’s ability to negotiate in Europe, while 33% said it would make no difference and 7% said it would help.

Cameron ‘will stick to his guns’

Foreign Secretary William Hague said it would be premature to suggest Britain had no hope of securing change.

“It would be far too early to say it doesn’t look like we are going to get these reforms,” he told BBC television.

“The prime minister acknowledged that the task had got harder, but look at the track record,” he said, citing Cameron’s success in cutting the EU budget last year.

The British government has sought to present the Juncker vote not as a defeat but proof that Cameron will stand up for his principles.

Health Secretary Jeremy Hunt railed on Saturday against the “cowardice” of other EU leaders who said publicly they would oppose Juncker and then voted for him.

And Hague said: “Everybody can now see in Europe that when the prime minister says he will not back down, he won’t back down – he will stick to his guns.”

Cameron calls Juncker to congratulate him

On the back of Friday’s summit, Cameron phoned Jean-Claude Juncker on Sunday to congratulate him, Downing Street said in a statement.

A spokesman for the prime minister said Cameron “congratulated” Juncker on his successful campaign, and on securing the nomination.

“They discussed how they would work together to make the EU more competitive and more flexible,” the spokesman said.

“The PM welcomed Mr Juncker’s commitment of finding a fair deal for Britain and Mr Juncker said that he was fully committed to finding solutions for the political concerns of the UK.”

The pair agreed to speak further at the next EU summit on 16 July.

UK Prime Minister David Cameron has waged a campaign to block the former Luxembourg Prime Minister and EU veteran Jean-Claude Juncker from becoming the next President of the European Commission.

But Cameron refuses this logic, saying Juncker's candidacy did not appear on the ballotpapersat the May election.

He insisted that EU heads of states and government take a vote on the matter during an EU summit on 27 June, knowing he does not have a blocking minority.