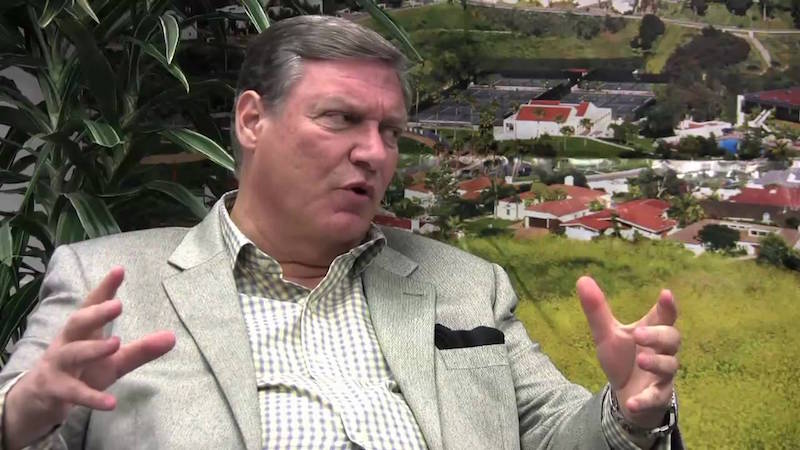 Ted Malloch, who wants to be Donald Trump's ambassador to the EU, has said it would be easier to do trade with its member states if they leave the bloc. [PepperdineUniversity/YouTube]

The political science professor who wants to be the new United States ambassador to the European Union has said that any country that follows the UK to leave the bloc could “instantly” have better trade relations with the US.

Ted Malloch said at a crowded talk on Tuesday (23 May) that he wants to be the next US ambassador to the EU because “there could be potentially a lot of action” in Brussels.

Malloch caused an uproar in Brussels earlier this year when he said during an appearance on a British television show that the Union needs some “taming”—much like the Soviet Union.

His talk in Brussels came one day before Trump visits the European Union capital for the first time. The US president will meet Belgian Prime Minister Charles Michel today (24 May) and hold talks with European Commission and European Council Presidents Jean-Claude Juncker and Donald Tusk on Thursday (25 May). After that, Trump will have lunch with new French President Emmanuel Macron and attend a meeting with heads of state from the other 27 NATO countries.

Tensions between Trump and the European Union have soared in recent months and were fuelled early on by his statements in favour of Brexit shortly before taking office.

Since January, several EU Commissioners have visited Washington in a bid to smooth over the strained relationship. Three top Trump Administration officials have come to Brussels in that time—none of them suggested the bloc should fall apart during their visits.

But if officials in the EU institutions believe that Malloch’s claim to be a frontrunner for the ambassador job is credible, his views will likely cause some hand-wringing in Brussels.

Malloch told journalists that he shares some of Trump’s most controversial opinions. He said he has known Trump for over 20 years and worked on his 2016 campaign. After Trump won the election, Malloch said he sat with staff members for an hour and a half and named the jobs he wants in the new administration. Ambassador to the EU was high on his list.

But Malloch has not had a one-on-one meeting with the president and Trump has so far not publicly weighed in.

The ambassador post has been vacant since 20 January, when Obama appointee Anthony Gardner left.

If Trump chooses him, Malloch will still face a lengthy background check. The Financial Times reported in March that Malloch hid millions of dollars on bank statements in order to declare himself bankrupt. He said he has evidence that can make “the Financial Times story look like fake news” and is considering a lawsuit against the newspaper.

Rumours started circulating earlier this year that Malloch might be a Trump favourite to become ambassador. That prompted several MEPs to write to European Commission President Jean-Claude Juncker and ask him to block Malloch’s appointment.

Malloch told EURACTIV.com that the MEPs’ complaints have had “the absolute opposite effect” so far because State Department officials and Trump don’t want Europeans to tell them what to do. He claimed they are now more likely to appoint him.

Even if Trump appoints Malloch, Juncker and Tusk could still severely limit his role if they refuse to give him credentials. It would be a drastic move that would cut Malloch’s access to enter EU institutions. But he seems unlikely to win over his critics anytime soon.

Malloch told the packed conference room yesterday that he thinks Brexit will benefit the UK, the EU-US trade deal TTIP is unlikely to be revived and the EU attempt to cooperate more on defence is a “mistaken road” to go down.

He suggested it would be a good thing if any other EU countries hold referendums and voters choose “a Brexit of their own”.

Outgoing US Ambassador Gardner told journalists days before he left his former post that members of Trump’s transition team had asked him which countries would leave the EU next, after the UK.

Malloch meanwhile called the US-EU trade agreement TTIP a multilateral deal, echoing Trump’s earlier statements that he would prefer to do business with individual member states instead of with the EU as a whole.

“It’s not to say there won’t be engagement at the EU level, but there will be a lot of engagement with member states,” Malloch said.

Asked if the Trump Administration’s relations with Europe would differ from Obama’s mostly because of its brash style, Malloch said style will only be one small difference.

“President Obama was a globalist, he believed in preferences to multilateral institutions. I don’t think in any sense that this is a continuation of what the Obama administration was suggesting. In fact, it’s a pretty radical turn of the tables,” he told EURACTIV.

Malloch bashed “left-wing journalists” who he said have completely made up the recent surge of news stories about the Trump Administration’s alleged ties to Russia during last year’s election campaign. He only spoke briefly in response to journalists’ questions about Russia and said the new US government should keep sanctions against the country in place.