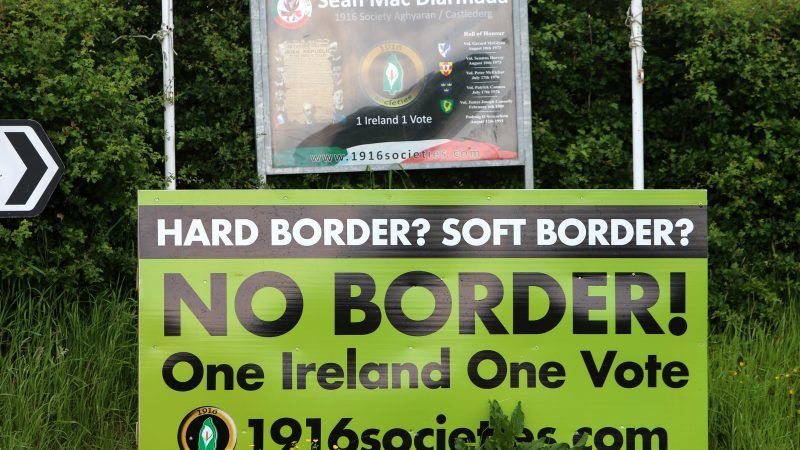 An Anti Brexit sign is seen beside traffic signs on the Corgary Road near Castlederg, Northern Ireland, 1 June 2018. [Paul McErlane/EPA/EFE]

The issue of preventing a hard border between the UK’s Northern Ireland and the EU’s Irish Republic is one of the main outstanding sticking points in negotiations between London and Brussels ahead of the United Kingdom’s 29 March exit.

Both sides want to avoid such a hard border because it could undermine a 1998 peace agreement that ended decades of sectarian conflict in the north but it is still unclear how goods crossing between the EU and the UK in Ireland would be monitored once the UK has left the EU’s customs union and the single market.

Lawmakers from the influential anti-EU European Research Group (ERG), who oppose May’s so-called Chequers Brexit plan in favour of a cleaner break with the EU, said existing systems and technology could be used and any extra checks could take place away from the border.

“Rational, pragmatic approaches can ensure that the vital trade across the border is maintained. At the same time, this allows the United Kingdom to conduct an independent trade policy without threatening the integrity of the EU Single Market,” the ERG said in a report.

“Jacob Rees-Mogg said the pro-Brexit European Research Group of Tory MPs he chairs would spell out its solution to the issue of avoiding a hard border between the Republic of Ireland and Northern Ireland at a meeting on Wednesday.”

A spokesman for May told reporters the government had committed to not having a hard border in Northern Ireland and that it didn’t believe the answer was to move the border by carrying out checks elsewhere.

“We have been working on the issue of the Northern Irish border for two years and we have looked at a significant number of potential solutions and we believe that the plan put forward by Chequers is the only credible and negotiable one,” he said.

May’s Chequers proposal involves a common rule book for goods trade with the bloc that the government says removes the need for the return of a hard border.

The ERG group said existing electronic procedures allowed customs declarations to be made ahead of travel, inspections can be done at the point of shipment and any additional declarations could be incorporated into the existing system used for VAT returns.

It also said licensed customs brokers could be engaged to support businesses in dealing with rules of origin and customs arrangements.

“All of these solutions are reasonable solutions and are already in existence so could be scaled up pretty quickly,” Conservative lawmaker Maria Caulfield, a member of parliament’s Northern Ireland Affairs Committee, told the report’s launch event.

The ERG group also said the government should agree equivalence of UK and EU regulations on agricultural products, something it said would be straightforward as the standards would be identical at the point the UK leaves the bloc.

The European Research Group isn't European, doesn't do any research, and isn't a group

I like how the acronym for the European Research Group mirrors my reaction to seeing anything about them.