Putin to meet May, Merkel, Hollande and Erdogan in China 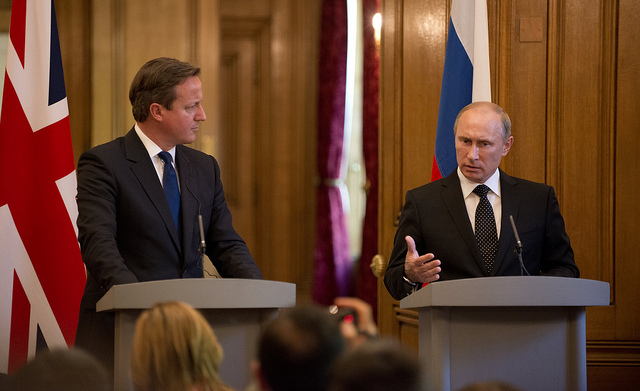 Relations between the UK and Russia were strained under May's predecessor David Cameron. [Number 10/Flickr]

Russian leader Vladimir Putin will hold a number of high-level bilateral meetings on the sidelines of 4-5 September summit in Hangzhou, China, a Kremlin aide told reporters on Tuesday (30 September).

Putin will meet with the leaders of France, Germany and the UK, as well as Turkish President Recep Tayyip Erdoğan.

On 4 September Putin will discuss a need for “a new impetus in bilateral relations” with British Prime Minister Theresa May.

Relations between Putin and the UK were strained under May’s predecessor David Cameron, who supported EU sanctions against Moscow.

Kremlin aide Yury Ushakov said that a previously agreed trilateral meeting of leaders from Russia, Germany and France, who were poised to discuss Ukraine’s crisis, will not take place.

Ushakov said that the meeting was called off due to a rising tension over Crimea peninsula.

Instead, Putin will meet separately with French President François Hollande on 4 September – though the date is still being discussed – and German Chancellor Angela Merkel on 5 September.

Putin will hold talks with Turkish President Tayyip Erdoğan on 3 September as the “process of normalisation of relations between the two countries is under way”, Ushakov said.

After the Russian jet was shot down in November last year near the Syrian-Turkish border, Russia imposed trade restrictions on Ankara. However, the relations started to thaw after conciliatory moves from Ankara in July. Both already met earlier this month in St Petersburg.

Turkish authorities detained an editor at the prominent Hurriyet newspaper in the latest round-up of journalists and others accused of links to last month’s failed coup, Hurriyet’s English-language publication said on Tuesday.