Refugee children ‘could be separated from their families after Brexit’

By Jessica Elgot | The Guardian 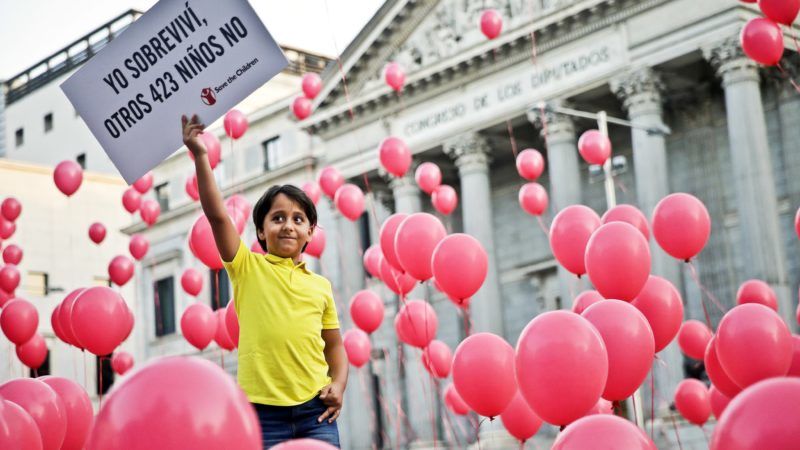 A Syrian refugee poses for photographers while holding a banner that reads 'I survived, 423 other children did not' at the Lower House in Madrid, Spain, on 1 September 2016. [Emilio Naranjo/ EPA]

Refugee children could be permanently separated from their families unless the government includes family reunification in post-Brexit immigration law, the head of UNICEF UK has warned. EURACTIV’s partner The Guardian reports.

The global charity’s UK boss, Mike Penrose, urged the government to commit to including wider family reunification rights in new immigration laws for when the UK leaves the EU.

Refugees currently have the right to be reunited with extended family members under the EU’s Dublin III regulation. However, the UK’s own rules cover only children and their parents, meaning any children who have been orphaned cannot safely reach adult siblings, grandparents or aunts and uncles.

“Brexit could risk the ability to get children fleeing war and persecution to the safety of their close family in the UK,” Penrose told the Guardian. “Now is the time for the UK government to broaden its own rules and ensure the protection of unaccompanied refugee children.”

In a new report, UNICEF outlines the dramatic situation in which millions of children currently find themselves. Worldwide, one in nine children is a victim of violence or armed conflict. The report spoke of a “new era of humanitarian crises”. EURACTIV Germany reports.

The government has said plans for an immigration system after the UK leaves the EU would would be revealed in a white paper this year, with a new immigration bill set to go through parliament in 2018.

UK immigration rules state that: “Your partner or child can apply to join or stay with you in the UK if: you were separated when you were forced to leave your country, [and] you’ve been given asylum or five years’ humanitarian protection but do not yet have British citizenship.”

The rules apply to children anywhere in the world, if one or both of their parents are in the UK. When the UK leaves the EU, British immigration rules will provide the only means by which children can be legally reunited with their families.

Penrose said the government should commit to widening the definition of family to allow refugee children to be reunited with siblings, grandparents, aunts and uncles, as well as their parents, a right which currently exists only under EU rules and means children must make the journey to Europe before they can exercise that right to join family in the UK.

“When the Calais camp closed last year, over 500 children were found to be eligible for the ‘Dublin’ family reunion route,” Penrose said. “This route is now at risk. By making small changes, the government can show, just as it did in Calais, that it is serious about ending the need for children to make dangerous journeys across the Mediterranean in order to reach their loved ones in the UK.”

The charity, whose headquarters are in Geneva, said the overhauling of reunification rules would tackle one of the key issues that pushes children into the arms of smugglers and traffickers in order to reach Europe.

A Home Office spokesperson said it was too early to commit to changes but the government had a clear preference for resettling children and their families directly from regions affected by conflict.

“The UK has a long and proud tradition of providing protection to those who need it and in the last year alone we have provided refuge or other forms of leave to more than 8,000 children,” the spokesman said.

“Both the UK and our European allies have a clear interest in ensuring that our strong cooperation on asylum continues and strengthens after we leave the EU. We are considering future arrangements but it is too early to speculate what these may look like.”