Schulz on collision course with Cameron over national parliaments’ role 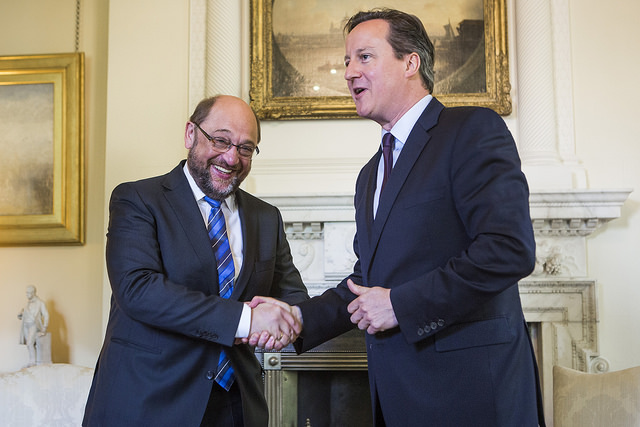 European Parliament President Martin Schulz has said he is in favour of giving a greater role to national parliaments in EU decision-making, one of the key demands of David Cameron seeking a renegotiation of the UK’s EU membership, but it has to be exercised towards national governments not EU institutions.

“I am in favour of giving national parliaments a greater role, but vis à vis national governments, because national governments are co-legislators with the European Parliament,” he said, speaking on Thursday (19 November) during a public debate in the Bozar concert hall in Brussels, organised by the French weekly l’OBS, and the Belgian dailies De Standaard and Le Soir.

Strengthening the role of national parliaments is a major demand of the British prime minister, and is one of the priorities for EU reform included in his letter to the President of the European Council, Donald Tusk.

Cameron suggested a system that would give groups of national parliaments greater power, something like a “red card” – a system to bring power back from Brussels to Britain.

This would give a group of like-minded lawmakers the power to stop unwanted directives and to scrap existing EU laws.

Currently, national parliaments can flag a ‘yellow’ or ‘orange’ card, under new innovations introduced by the Lisbon Treaty in 2009.

Under the so-called early warning mechanism, a national parliament can send a reasoned opinion to the European Commission in case of subsidiarity concerns over a specific legislative proposal. It is then up to the Commission to decide whether the concerns are justified, and if the proposal must be amended or withdrawn.

It is a matter of numbers, said Schulz, arguing in favour of strengthening the role of national lawmakers towards national governments.

This is already the case in some member states. The Danish Folketinget was the first national parliament in Europe to set up a negotiating mandate system, which requires the government to obtain negotiating mandates from a parliamentary committee before important deliberations in the Council. The Folketinget was also the first national assembly to establish a permanent representation in Brussels in 1991.

According to Schulz, such national scrutiny would strengthen national and EU decision-making. “There are 751 MEPs in eight parliamentary groups representing 300 parties and political movements in Europe,” he said, stressing that when you add the 28 governments the system becomes complex.

It is therefore inconceivable to add to this complexity 10,000 national parliamentarians, whose role is really is to exercise proper national scrutiny.

“The introduction of a ‘red card’ mechanism would significantly alter the constitutional equilibrium in the EU and transform national parliaments into a collective veto player that could block the European Commission’s legislative initiatives, said Valentin Kreilinger, a research fellow at the Jacques Delors Institute in Paris.

Instead of a bigger house of cards with a new ‘red card’, the EU institutions and the other member states should concentrate their efforts on improving the current system, added Kreilinger.

“The Commission could promise to consider a yellow card more seriously – or, alternatively, the Council or European Parliament could make a political commitment to drop a Commission proposal if national parliaments oppose it – and the eight-week timeframe could be extended or interpreted in a slightly more flexible way,” he added.

Speaking recently to EURACTIV, Danuta Hübner, chair of the European Parliament Constitutional affairs committee, said both national parliaments and the European parliament are learning about the modus operandi of the early warning system.

“The major weakness of the procedure is that it allows the national parliaments to go to the media every time they reject something and say “we defended you from Brussels once again”, creating a negative feeling about Europe, but there is no way for them to say “we support this good proposal from the EU”, she said.

Hübner added that when it comes to national parliaments’ cooperation with national governments in EU decisionmaking “we still need to see a lot of change”.

She argued in favour of a better system of interaction between national parliaments and governments on EU affairs, as that could have a positive impact on their feeling of ownership of European ideas.

“But that requires still a lot of work,” she said.