Powers over tax, spending and welfare will be devolved to the Scottish Parliament, UK Prime Minister David Cameron said this morning (19 September). He also moved to prevent Scottish members of the UK Parliament, voting on English matters and a wider programme of constitutional reform.

Alex Salmond,  first minister of Scotland and leader of the Scottish National Party, conceded the pro-independence “Yes” campaign had lost at about 6:20am British time.

Former Chancellor Alistair Darling, who led the Better Together campaign, said the people of Scotland had “chosen unity over division and positive change rather than needless separation”.

This morning’s (19 September) result brings to an end a two-year campaign that divided the country and was closely watched by EU leaders.

A “Yes” would have bolstered various independence movements in countries such as Belgium and Spain with possible ramifications for the EU itself.

It would also have raised questions over Scotland’s status as an EU member state. There is no precedent for a territory leaving an EU nation and then applying for membership of the Union.

Cameron announced a programme to devolve further powers over tax, spending and welfareto the Scottish Parliament. This should be agreed by November with draft legislation to follow in January, he said. Negotiations should involve all the main UK political parties and the Scottish National Party, he said.

Pro-UK political leaders pledged to give many more powers to Scotland a “devo max”, after opinion polls showed a surge of support for independence.

Cameron said, “I will ensure that those commitments are honoured in full.”

UK Deputy Prime Minister Nick Clegg said, “We must now deliver on time and in full the radical package of newly devolved powers to Scotland.”

The final margin of victory was about three points greater than predicted by final opinion polls.

We have heard the voice of Scotland and now the millions of voices of England must also be heard. #IndyRef

The “West Lothian question”, where MPs from Scotland, Northern Ireland and Wales can vote on matter on affecting England has long been a source of controversy. Resolving it may quell a potential Tory rebellion against “devo max” after a more convincing victory than was expected.

The settlement for England had to happen at the same pace as for Scotland. Wales and Northern Ireland’s relationship with the UK also needed to be re-examined, he said. Commentators said the timetable was ambitious.

Scotland is perceived as more pro-EU than the rest of the UK. Had it left, it would have increased the chances of “Brexit” in the possible in/out referendum on the UK’s membership of the EU.

Commentators this morning said that the Eurosceptic UK Independence Party would study the No campaign strategy closely both for next year’s general election and the Brexit referendum. UKIP leader Nigel Farage told BBC Radio 4 that he backed a devolved, federal UK.

I’m delighted we still have a United Kingdom #indyref

Despite its defeat, the “Yes” campaign scored some significant successes, not least a vote in favour of just under 45% and the devo max commitments.

Glasgow, Scotland’s largest city, voted in in favour of independence, by 194,779 to 169,347, with Dundee, West Dunbartonshire and North Lanarkshire also voting “Yes”.

Cameron has promised the Brexit referendum if he wins the national election next year.

Some MEPs, such as Sajjad Karim, a UK Conservative, have suggested that a vote by English voters to take the UK out of the EU could re-ignite the Scottish independence debate.

Scotland MEP Ian Duncan, a Conservative, told EURACTIV, “The result has been quite clear and the turnout was extraordinary. It strengthens the UK as a whole. The focus now will be on the UK reaching out beyond its shores to focus on its relationship with the EU.

“In a future referendum I believe Scotland will also vote to stay in the EU but we do need reform, the right relationship with the EU.”

Manfred Weber, the German leader of the European People’s Party, said, “We call upon the British government to keep in mind the majority of Scots are pro-EU.”

“The European Commission welcomes the fact that during the debate over the past years, the Scottish Government and the Scottish people have repeatedly reaffirmed their European commitment.”

Commission President-elect Jean Claude Juncker also welcomed the results in similar terms. But at the Commission’s midday briefing, and over 35 minutes, a spokeswoman repeatedly refused to comment on what the referendum meant for the Brexit referendum or the possible poll for Catalonian independence from Spain.

Trade Commissioner Karel De Gucht was far clearer. He told Belgian Radio One, “If Scotland had chosen independence that would have been a political landslide of the nature of the break-up of the Soviet Empire.

“There will be no snowball effect. The choice for an independent Scotland would be the end of Europe as we know it today. Other secessionist movements would then also want to hold referendums.”

A Lord Ashcroft poll revealed that 27% of voters on both sides polled named EU membership as one of the reasons behind their decision, when asked what were the two or three most important issues for them in voting. 90% mentioned the National Health Service, 78% disaffection with Westminster politics and 64% mentioned the pound. 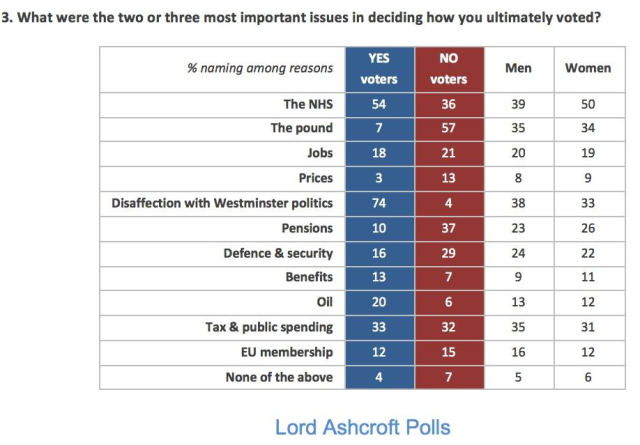 European Parliament President Martin Schulz said, "The Scottish people have voted to remain part of the United Kingdom. First of all I welcome that this vote took place within a democratically agreed process inside of the country. I believe that, in a time when sticking together has proven its worth in meeting the challenges we are facing in all walks of life, this is a sound decision."

Germany's foreign affairs minister Frank-Walter Steinmeier said, "I have great respect for the exemplary democratic culture of Great Britain that has been expressed here. The result of the vote speaks for itself; the people want a strong Scotland in a strong Great Britain. I believe this is a good decision for Scotland, Great Britain and also for Europe."

Pierre Moscovici, France's finance minister and incoming commissioner, said the Scottish vote allowed a unified UK in a unified Europe. One must also listen to the message of the "Yes" campaign.

Co-presidents of the Greens/EFA group in the European Parliament, Philippe Lamberts and Rebecca Harms said, "Cameron, Miliband, Clegg and the political establishment in London spared no efforts to highlight the benefits of a United Kingdom to the people of Scotland; we now expect them to show the same enthusiasm to make the case for a united Europe. The arguments for being 'Better Together' are no less valid for Europeans than they are for the people of the United Kingdom."

Markus J. Beyrer, Director General of BusinessEurope said, "The Scottish people have voted for political and economic stability. This clear decision for British unity is also an important signal for Europe. The European Union benefits from a strong reform-oriented British voice.”

Michalis Peglis, advisor on European affairs in the Greek government said, "The European Union has too many pressing issues at the moment to address for another one to be added.  The decision of the people of Scotland on the referendum is received positively throughout Europe. It reconfirms the commitment of the Scottish people to the United Kingdom, while it helps avoid the opening up of other separatist movements in other parts of the continent."

The current Scottish Parliament was founded in 1999 as part of the process of devolution within the UK, which created regional assemblies in Scotland, Wales and Northern Ireland, to give the regions greater autonomy.

The Scottish Parliament has control over some parts of policy, such as education and health, and can create its own laws on these issues.