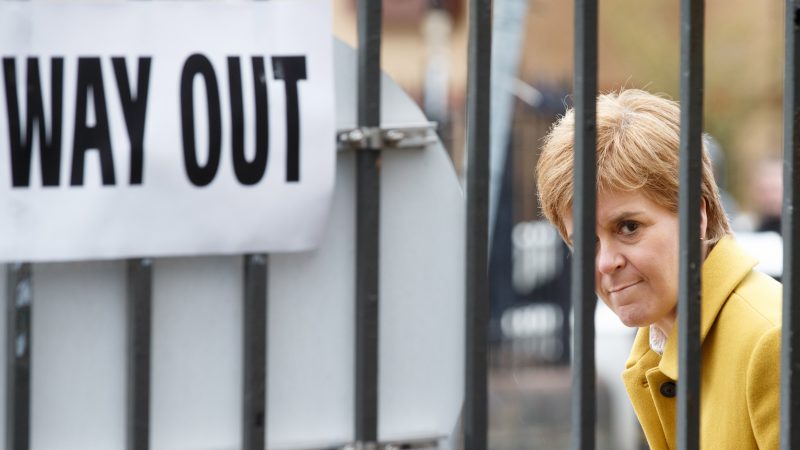 Scotland’s power-sharing government on Tuesday (7 September) pledged to hold a new referendum on independence by the end of 2023, despite strong opposition from London.

First Minister Nicola Sturgeon said work would restart on a detailed “prospectus” for a breakaway, as she set out the government’s strategic plan for the coming year.

“Our aim, Covid permitting, is that it (the referendum) will be in the first half of this parliament, before the end of 2023,” she told lawmakers in Edinburgh.

“As we emerge from the pandemic, choices follow to be made that will shape our economy and our society for decades to come.

“Which parliament, Westminster (in London) or Holyrood (in Edinburgh), should make these choices and what principles will they be guided by?

“These are questions which cannot be avoided nor postponed when the die is already cast.”

Sturgeon said the detailed plans would help Scots make an informed decision on remaining in or leaving the three-centuries-old union, after a previous vote in 2014.

Then, Scots voted by 55% to 45% to remain part of the United Kingdom of Great Britain (England, Scotland and Wales) and Northern Ireland.

But Sturgeon, who heads the Scottish National Party (SNP), said “the case for independence is a strong one”, adding: “We will present it openly, frankly and with confidence and ambition.”

Last month, the SNP announced a landmark power-sharing deal with the Scottish Green Party to give them a pro-independence majority, which has devolved powers in areas such as health, education, environment and transport.

The UK parliament in London, which retains powers in areas such as foreign policy, immigration and defence, has to grant permission to hold a referendum.

Prime Minister Boris Johnson has ruled out doing so, while his senior colleague, Michael Gove, has said he “can’t see” a vote happening before the 2024 UK general election.

The Scotland in Union group, which opposes independence, said the majority in the country did not want another “divisive referendum” any time soon.

“Rather than pull people apart, the government should be focused on bringing communities together so that we build a recovery which leaves nobody behind,” the group said.

But Sturgeon is banking on an increase in support for going it alone, as a majority of Scots backed staying in the European Union in the divisive 2016 Brexit vote.

She also saw her popularity soar compare to Johnson due to her handling of the Scottish government’s pandemic response.