Johnson, known for his gaffes and hyperbole, made the comment during a trip to India but its repercussions were felt immediately in Brussels and London.

The Foreign Secretary, a leading Leave campaigner who then ducked out of the running to succeed David Cameron as prime minister, said “I think that if [French President] Monsieur Hollande wants to administer punishment beatings to anybody who chooses to escape, rather in manner of some sort of World War II movie, then I don’t think that is the way forward.”

The former journalist made the remarks at a political conference in New Delhi.

Guy Verhofstadt , the European Parliament’s Brexit negotiator, labelled the comments as “abhorrent and deeply unhelpful” and urged May to condemn it.

Yet more abhorrent & deeply unhelpful comments from @BorisJohnson which PM May should condemn. https://t.co/GdVQh0AMX1

In fact, a Downing Street spokeswoman told reporters it was a “theatrical comparison”.

“He was making a point. He was in no way suggesting that anyone was a Nazi,” she said. Labour leader Jeremy Corbyn also voiced disapproval, calling them “wild and inappropriate”.

It was, in fact, the second time in one day Conservative ministers had invoked the Second World War in relation to the EU exit negotiations. 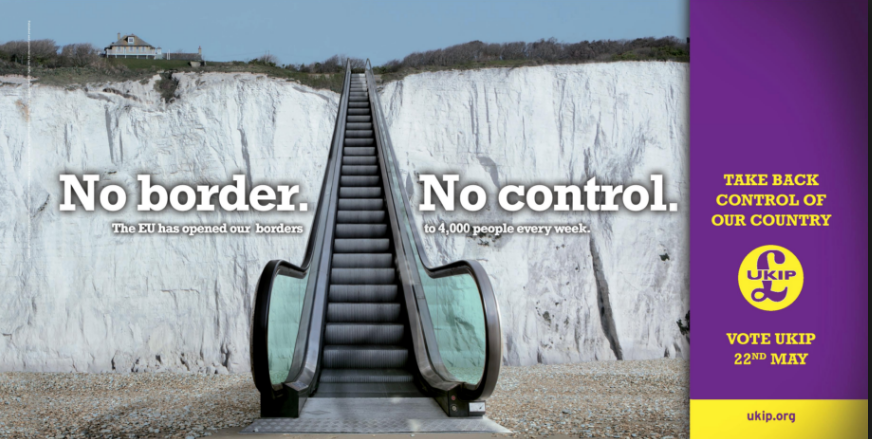 A UKIP campaign poster, depicting the White Cliffs of Dover as an escalator for immigrants. [UKIP]

Spitfires, the White Cliffs of Dover and the UK’s “finest hour” are a motif of UKIP campaigning, with similar imagery now slipping into mainstream Conservative speeches – suggesting a tin ear to the continent, where the EU is seen as solidifying the peace following Hitler’s war.

In her keynote speech on Britain’s negotiating objectives yesterday (17 January), May specifically cautioned against loose talk and indiscipline.

She said: “It is a crucial and sensitive negotiation that will define the interests and the success of our country for many years to come. And it is vital that we maintain our discipline.

“That is why I have said before – and will continue to say – that every stray word and every hyped up media report is going to make it harder for us to get the right deal for Britain.

“Our opposite numbers in the European Commission know it, which is why they are keeping their discipline. And the ministers in this government know it too, which is why we will also maintain ours.”

May appointed Johnson Foreign Secretary after he ducked out of the leadership race, following David Cameron’s resignation in the wake of the referendum defeat.

Many suspected that May – who campaigned for Remain – appointed Johnson, Davis and Liam Fox – all Leave campaigners, to the three crucial Brexit ministries to force them to make the negotiations live up to the promises made during the campaign.

Johnson’s brother, Jo Johnson, a fellow MP and Universities Minister, told BBC radio: “He was making a powerful point that we want a rational deal.

“He was using colourful language to get across an important point,” he said.

Hollande has consistently said Britain would not be granted better trading terms outside the single market, while German Chancellor Angela Merkel warned – before May’s speech – that the UK would not be allowed to “cherry pick” items it liked from EU membership.

Johnson, in Delhi, said Britain’s decision to exit the single market did not mean it wanted to stop having access to EU countries.

“We should be working together. It seems absolutely incredible to me that in the 21st century, the European Union… should be seriously contemplating the introduction of tariffs or whatever to administer punishment to (the) UK,” he said.

“And don’t forget, these things cut both ways. After all, the Germans, as is well known, export one-fifth of their motor manufacturing output.”

The British foreign secretary is due to meet India’s prime minister and finance minister during his two-day trip to the country.

Britain has made clear its desire to boost trade with India, the world’s fastest-growing major economy.

“I think time is fast upon us that we need to turbo charge this relationship with a new free trade deal such as we would shortly be able to do,” Johnson said.

“We can’t negotiate it now but we can sketch it out in pencil, on the back of an envelope,” he added.