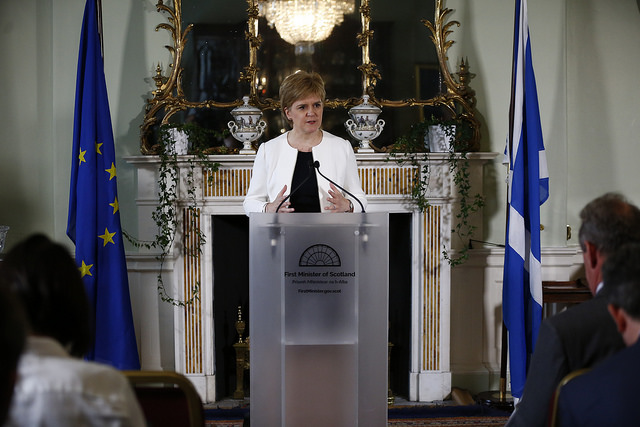 “Brexit raises afresh the issue of independence… It would allow us to take control of our own destiny,” Sturgeon told lawmakers from her Scottish National Party, which favours breaking off from the rest of Britain.

Centre-left leader Sturgeon said the survey would be conducted through a website and by polling party members, aiming to reach two million people, or around half the electorate.

The results are due by St Andrew’s Day on 30 November  – celebrating Scotland’s patron saint.

“I believe it is right that our party does now lead a new conversation on independence. It will be a new debate, it will not be a re-run of 2014,” she said in Stirling.

Stirling was where William Wallace won a battle against the English, a feat-of-arms immortalised in the film Braveheart.

Scots are deeply divided on the issue and a new poll by YouGov published on Friday found 54% were against independence and 46% in favour. In Scotland’s independence referendum two years ago, 55% voted against and 45% in favour.

.@NicolaSturgeon: it really does beggar belief that the Tories are no nearer to outlining what Brexit means https://t.co/bVlDFqU0FH

But Sturgeon said she believed support for separation would increase once the effects of Brexit become clear and argued that the weakness of the main opposition Labour Party meant the centre-right Conservatives could be in power for decades to come.

She called the Conservative government’s failure to prepare for a “Leave” victory in the June EU referendum “reckless and irresponsible” and warned the result would badly damage the Scottish economy.

“I am not prepared to stand by and watch that happen without a battle,” Sturgeon said, adding that she would seek extra powers from London for Scotland to preserve EU ties to help businesses and universities.

Addressing Prime Minister Theresa May she said, “You do not have a clear mandate to take any part of the UK out of the single market” of the European Union.

May has spoken out against Scottish independence and promised to involve Scotland in negotiations on Britain’s future relationship with the EU.

Britain as a whole voted to leave the European Union by 52%t to 48% but in Scotland the result was 62% to 38% in favour of staying in the EU.

Within hours of the result, Sturgeon said a new independence referendum was “highly likely” although formal consent would be required from Britain’s national parliament to hold a new vote.

.@NicolaSturgeon “Before we start talking, we must listen.” pic.twitter.com/7P9Sfm1ZGa