Finance Minister Philip Hammond insisted that a deal will only be brokered "if both sides want it". [Alexandros Michailidis / Shutterstock]

Philip Hammond’s pre-Brexit budget, presented on Monday (29 October), was full of small giveaways designed to be popular with voters, and also included a stern warning to his hard Brexiteer colleagues in the Conservative party: you can have tax cuts or a hard Brexit, but not both.

The cocktail of income tax cuts, extra health and defence spending promised by the UK finance minister on Monday will certainly be popular.

Most Britons will see a slight increase to their pay packet when the tax changes come into effect next April, weeks after the UK formally leaves the EU – a personal post-Brexit dividend.

That will go down well with Conservative MPs anxious that their party’s unpopularity could see them lose their seats.

Hammond also bought off the Northern Irish Democratic Unionist Party, which has repeatedly threatened to topple Theresa May’s government if she caves in to the EU’s proposals to avoid a hard border on the island of Ireland.

After promising Northern Ireland a £1bn pot of new spending, the DUP’s Brexit spokesman, Sammy Wilson, confirmed that his party’s MPs would support the Budget when it is voted on Thursday (1 November). Wilson’s party had previously threatened to oppose the Budget because May was not being tough enough – in their view – on the Irish backstop question.

“Austerity is coming to an end”, was Hammond’s optimistic message, and a clear pitch to voters sympathetic to Labour leader Jeremy Corbyn’s offer of increased public spending and tax hikes on the wealthy.

But he was crystal clear that this rosy economic future – not to mention more tax cuts and spending increases – is predicated on May being able to strike a Brexit deal with the EU and then getting it approved by UK MPs.

As ever, the devil is in the detail; in this case, the small print of Hammond’s 106-page Budget book and the 259 pages of economic assessments published by the Office of Budgetary Responsibility, the independent fiscal watchdog set up in 2010.

The OBR’s economic forecasts assume that a deal will be struck and that the UK will have a two year transition period during which the UK-EU trading relationship “will remain as it is now”.

“In the near term, it is worth emphasising that this forecast assumes a relatively smooth exit from the EU next year,” says the OBR.

A ‘no deal’ or ‘disorderly’ Brexit “could have severe short-term implications for the economy, the exchange rate, asset prices and the public finances,” it warns.

Hammond has said that an emergency budget will be needed in the spring if the UK crashes out of the EU without an agreement on its divorce from or future relations with the bloc.

The group of hard Brexiteer Tories, who want a ‘no deal’ scenario, have seized on this as an opportunity to call for a tax and regulation slashing budget that would turn Brexit Britain into a North Sea Singapore.

But again, the OBR warns ‘not so fast’. The cash needed for a buffet of tax cuts simply won’t be there if the UK leaves the EU with a ‘no deal’ Brexit.

The OBR also pointed out that opting from Brexit in 2016 “appears to have weakened the economy”, adding that “the fall in the pound has squeezed real household incomes and consumption while providing only a modest boost to net trade”.

“Meanwhile, uncertainty regarding the Brexit negotiations appears to have dampened business investment (by more than earlier data suggested).”

All told, the OBR reckons that the UK economy was 2 to 2.5% smaller by mid-2018 than it would have been if Theresa May’s predecessor David Cameron had not called the Brexit referendum in June 2016.

“The average quarterly growth rate has slowed from 0.6 per cent between 2013 and 2015 to 0.4 per cent since the beginning of 2016, taking the UK from near the top of the G7 growth league table to near the bottom,” states its report.

So much for that oft-promised Brexit dividend.

It is also noticeable how little is expected to change over the next five years. The Budget book allocates £46.9 billion in transfers to the EU between 2019 and 2024, plus assumed spending of £20.8 billion that is earmarked to plug gaps from lost EU subsidies to farmers, fishermen and cohesion funding.

That works out at around £13 billion per year, the same as the UK’s annual payment to the EU budget. 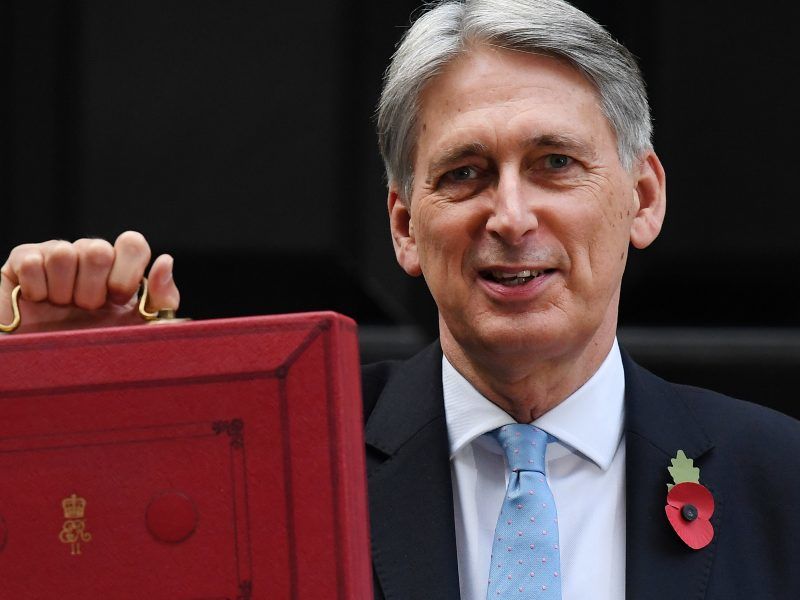 The first post-Brexit budget will hand Britons tax cuts, but the UK Chancellor, Philip Hammond, offered a veiled warning that the UK would be poorer if Theresa May’s government failed to strike a Brexit agreement with the EU.

Paul Johnson, the director of the Institute for Fiscal Studies, a London-based think tank, reckons there is “perhaps a one in three chance” of the UK’s finances rapidly deteriorating as a result of Brexit next year.

“Most immediate and significant is the possibility of a disorderly exit from the EU”. The OBR’s forecasts suggest that a chaotic Brexit could plunge the UK into a swift recession.

Theresa May was in Norway on Tuesday (30 October) and insisted that staying in the European Economic Area – like Norway – was not on the cards for the UK.

May also played down speculation that she was preparing to call a snap election, which she said “would not be in the national interest,” after pundits pointed out that such a giveaway budget usually preceded an election.

May and Hammond may not be planning an election but their pre-Brexit budget was certainly designed to strengthen their hand as the Brexit negotiations approach their denouement in Brussels and London. Labour and the other opposition parties will find it hard to justify opposing Hammond’s budget.

Meanwhile, recalcitrant Conservatives have been served with a warning that if they want to keep their seats, and their constituents sweet, they must choose tax cuts over a hard Brexit.