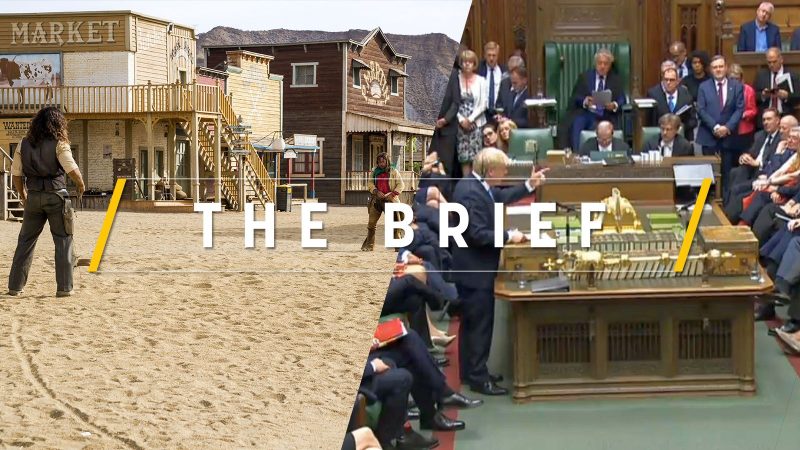 In the convoluted, protracted, high-stakes game of poker that is Brexit, it has become very difficult to predict who will blink first. Or if someone already has. Or even in whose court the ball currently is.

Boris Johnson appears to be sticking to his guns, but he’s not the only one. Having stolen a march on his opponents by closing Parliament for five weeks, starting next Monday (9 September), he is now confronted by opposition parties, and Tory rebels, playing their last card to stop him taking the UK out of the EU without a deal

This evening potentially marks the start of a seismic rupture in British politics.

Opposition lawmakers are confident that they have the numbers to pass legislation banning a No Deal Brexit.

Should that happen, Johnson has vowed to expel the 15-20 MPs from his Conservative party who are set to vote against him, while his aides have briefed that Johnson will, if defeated, call a snap election for October 14.

The opposition parties say they will not agree to an election until the no-deal law is formally on the statute book. They don’t believe Johnson’s claims that he is working to secure a deal with the EU, and fear that he could end up delaying the poll until early November.

While watching this mess unfolding – which will probably end in an election – the EU must ensure that it does not get played out. The best way to show strength and wisdom is to appear to be relenting and, before the 31 October deadline, grant the UK another extension.

The rationale is easy to justify: whether the UK agrees on a withdrawal deal, a chaotic no-deal Brexit or something else entirely –  the decision is too important and far-reaching for both sides to rubber-stamp and enforce with only a technical government in London.

The EU has already assumed the role of the patient, rational negotiator, offering the UK one last chance to revisit the Withdrawal Agreement (something the EU staunchly rejected earlier), if London can present a credible and viable alternative to the notorious Irish backstop.

Commission spokesperson Mina Andreeva explained the state of play to reporters this lunchtime. Meetings between EU officials and Johnson’s sherpa, David Frost, are now taking place twice a week. But the admission that “we are meeting more often” does not inspire confidence that a breakthrough can be expected any time soon.

And therein, once again, lies the rub. For if there really is a viable alternative to the backstop, it has not yet been presented. Nor is it very likely to be.

At the same time, the aerospace industry builds the aircraft that allow people to travel the world. But the industry itself is a globe-trotter as well.

Elections in Saxony and Brandenburg have changed the balance of power in these states. EURACTIV Germany brings an overview of reactions by party leaders after the elections.

Ignoring Poland, the agri-food supply chain in Italy, one of the biggest food producers in the EU, is determined to make a case for the next national Commissioner to land the EU’s agriculture portfolio.

Meanwhile, the US and Poland have signed a joint declaration to collaborate on 5G security in what US VP Mike Pence said would “set a vital example for the rest of Europe”.

French customs office is facing up to the difficulties of preparing for a ‘no-deal’ Brexit, which would mean the return of a hard border.

The United States, Britain and France may be complicit in war crimes in Yemen, the United Nations said in a recent report.

Trade unions came out in solidarity with Hong Kong pro-democracy campaigners, with a group in Brussels calling for Europe to lead the way in ensuring that human rights are eroded no further in the region.

Kazakhstan’s new president, Kassym-Jomart Tokayev, delivered his first major speech following his election last June, defining his policies in all fields of the economy and society.