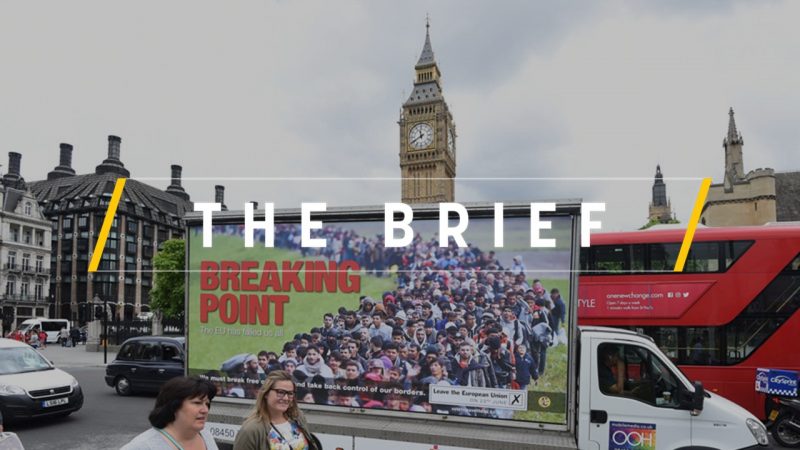 Thursday’s general election has been billed on all sides as the most decisive in several generations. Britain, not to mention plenty of its citizens, is at breaking point. But not quite in the way that Nigel Farage would have had you believe when he launched his infamous poster of Syrian refugees.

During the campaign, this reporter has spoken to countless people – many of them Jewish – who say they will leave the UK if Labour’s Jeremy Corbyn becomes prime minister after the 12 December general election. Others say that the prospect of five more years of Boris Johnson is too much to bear.

This kind of talk is not unprecedented. For most of the 1980s and 1990s, veteran rocker Phil Collins used to threaten to stay in tax exile in Switzerland if a Labour government was elected. But this time, talk of exodus is not a joke.

What happens to the five million Brits abroad and EU nationals in the UK, whose lives will be directly affected and who have been largely ignored during the election campaign?

In a Sky News interview at the weekend, Johnson gave a broad hint, complaining that EU citizens had been able to “treat the UK as though it’s basically part of their own country” for too long.

‘You’re not welcome’, he might as well have said, and faced with this kind of hostility, it is unsurprising that many Europeans living in Britain no longer feel comfortable, even if they have lived there for most of their adult lives.

Anti-migrant bigotry – which hit a nadir during the 2016 referendum campaign – has not gone away. In fact, Leave.EU have re-used the ‘Breaking Point’ poster to accuse Labour of putting 45,000 asylum seekers ahead of Brits in the queue for council housing – one of the more far-fetched claims in a campaign full of tall tales. It’s a sad and illogical state for a nation of immigrants, whose core public services have for generations relied on migrant workers, to find itself in.

Johnson’s success has been to rerun the themes of the referendum campaign, hoovering up the Brexit party vote, which has dwindled from over 20% to 3% in a couple of months. That is the only way his party could win the election, even though, privately, some Conservatives complain that Johnson has actually succeeded too well in making the election a binary choice.

In the process, however, the culture war that splits the country down the middle has been entrenched. As it was in the 2016 referendum, age and education, rather than social class, are now the main determinants of voting behaviour.

As a result, when the dust settles, a sizeable minority of British residents will decide, whatever the election outcome, that the country is no longer for them.

A message from BP: 40% of consumers surveyed by SYSTRA say a lack of charging points is a barrier to switching to an electric vehicle. Find out what the other barriers are and, crucially, how together we can remove them in this new independent transport research report, commissioned by BP.

Croatia, which starts its first EU presidency stint in January, is “not quite happy” with Finland’s proposal for the EU’s seven-year budget and will seek to amend the proposal in order to preserve funding for Cohesion and the CAP, the country’s Foreign Minister Gordan Grlić Radman told EURACTIV.

The ongoing EU budget negotiations have revealed the intention to enforce substantial cuts in Europe’s external action agenda. This could represent another drawback for the bloc’s defence ambitions.

Turkey’s foreign minister Mevlüt Çavuşoğlu said the United States could be barred from using two strategic air bases in retaliation to possible US sanctions against his country.

While no concrete steps were adopted, the ‘Soros orchestra’ respresents only one step in the next chapter in Hungary’s Article 7 odyssey.

Nicolas Schmit announced  that he will unveil his proposal for an EU minimum wage framework in early January, following his first Council meeting as a member of the new European Commission.

Countries such as Brazil, China and Saudi Arabia, are criticising Article 6 of the Paris Climate Agreement and its carbon offsetting mechanism even though they are currently not footing the “climate bill”. Climate advocates fear this stance may weaken the entire treaty.

The French National Assembly has voted to ban all disposable plastics by 2040, which would be far too late for many environmental advocates.

The last topic-heavy European Council of the year with the two top items, MFF and climate change on the summit menu on Thursday.

Stay tuned at EURACTIV for all the hot news and look out for our LIVEBLOG to take you through the night!

One response to “The Brief, powered by BP – Breaking Point”