The Brief, powered by CEPI – Survival of the unfittest 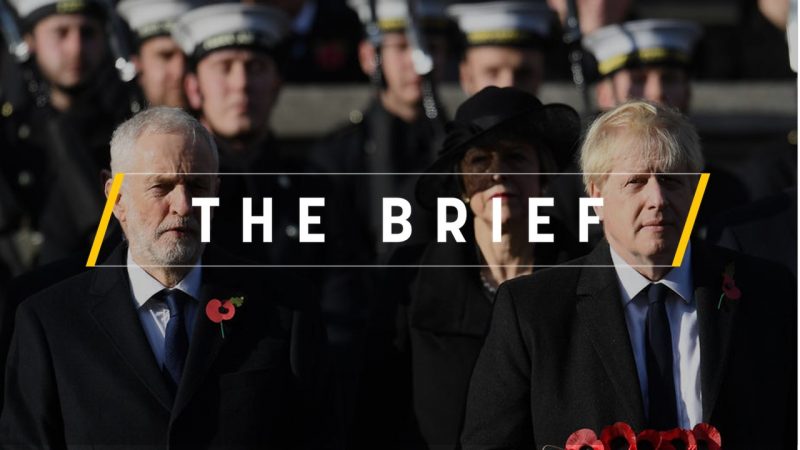 Boris Johnson and Jeremy Corbyn will face off this evening in the UK’s first presidential-style debate – the Liberal Democrats and Scottish National Party lost a court battle to be part of it. The BBC and Sky will hold their own debates with all four party leaders.

Armed with a poll lead of 10-12%, the prime minister has the most to lose but the pressure is not on him as much as on Corbyn, who badly needs to win the TV debates, and win them well.

The trouble is that in what has always been billed as a ‘Brexit election’, the Labour leader is weakest on the big issue. Corbyn continues to give the impression that he is still deeply ambivalent about Brexit.

His party’s position that it will negotiate a Brexit agreement within three months and then put it to a referendum, with most of his party campaigning for the UK to remain in the UK, is complicated, convoluted and unconvincing.

The structure of the debate suits Johnson; half of it will be devoted to Brexit.

Corbyn is far stronger on domestic policy, particularly public services, where the Tories have made a strategic error by seeking to paint the Labour leader as a free-spending Marxist while in the same breath promising their own spending splurge on health and education.

Both men are deeply divisive figures aside from their positions on Brexit. Corbyn has been repeatedly accused of turning a blind eye to anti-Semitism in the Labour part – the Board of Jewish Deputies has accused him of “turning a once-great, anti-racist party into a cesspit of antisemitism”.

Johnson has made a series of racist and Islamophobic remarks.

That led many people to think that the December polls would see more fragmentation. Instead, the UK’s long-standing two-party system has re-emerged. Support for Nigel Farage’s Brexit party has rapidly evaporated after Farage announced that he would not stand candidates in seats held by the Conservatives.

That has boosted the Conservatives’ numbers. Farage’s party has almost no chance of winning a single seat and may poll as low as 5%, six months after winning the European elections.

Meanwhile, there are signs that Labour is picking up support from the Liberal Democrats, although the chances of Johnson being denied a majority depend on Labour and Lib Dem supporters voting tactically. The UK’s First Past the Post voting system forces voters to make a binary choice.

In pubs, clubs and bars, Britons chuckle (or despair) that the choice facing them is between two people who are so obviously unfit to be Prime Minister. Tonight marks the start of the survival of the unfittest.

Cepi presents its CEO initiative and Forest-Based Industries’ vision for a carbon-neutral European society in 2050. Our solutions are made of a renewable and natural resource, the European forests. 89.8% of forests we own or manage is certified. Our goal is to empower consumers: we help them make more sustainable choices thanks to our easily available, affordable and climate-friendly products.

German Chancellor Angela Merkel resisted calls to increase public spending as pressure continues to grow from her country and abroad to avoid the austerity that worsened the euro crisis.

Europe’s top court ruled that Polish judges must decide on the validity of a disciplinary chamber imposed on them by the government, in a possible setback for Warsaw’s controversial judicial reforms.

Washington stepped up its push for European countries to repatriate and put on trial their citizens who fought for the Islamic State, launching talks with officials in Brussels.

Parliamentary polls in Belarus did not show respect for democracy, international observers said, after the opposition to authoritarian President Alexander Lukashenko failed to win a single seat.

NATO foreign ministers are meeting in Brussels to agree on space a the Alliance’s fifth domain and discuss the NATO Leaders meeting in December.