The Brief, powered by Eurogas – Master and Commander 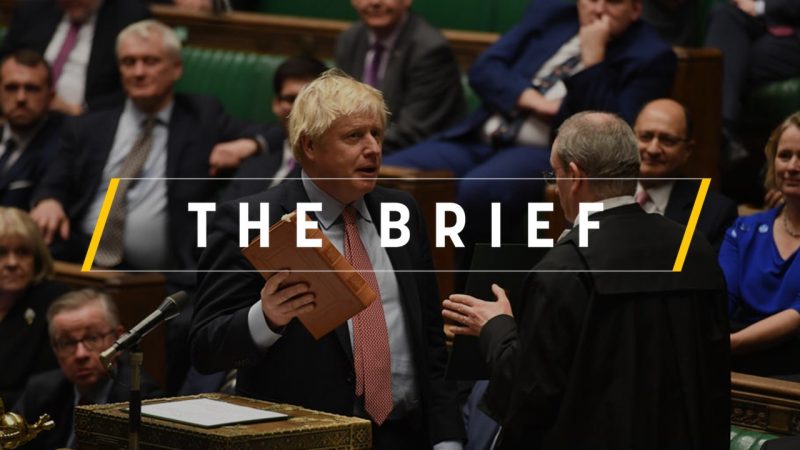 Boris Johnson had every reason to be pleased with himself when he returned to Westminster as the all-conquering hero this week.

Not since Tony Blair has one person been so dominant in UK politics. Most of the new Tory MPs, particularly those from the north of England seats that turned blue for the first time, know full well that they owe their seat to Johnson.

But after having gambled everything and won big, Britain’s brash blond immediately laid another hefty stake.

The threat of a no-deal Brexit was taken off the table late on Thursday night when it became clear that Johnson had a decisive majority. Financial markets sighed with audible relief.

Yet within a week it, no-deal has been put back on the table with a new deadline: December 2020, courtesy of Johnson’s promise to make it illegal to extend the transition period that follows the UK’s exit from the EU.

Having celebrated the prospect of political stability under a strong government, London’s financial markets were suddenly becalmed. Most of the gains made by sterling were immediately wiped out.

Betting strongly on the December deadline is a curious tactical move, largely because Johnson doesn’t gain anything from making it. Instead, he risks making a rod for his own back.

With a thumping majority, he can do what he likes at home. The Withdrawal Agreement will be rushed through Parliament by mid-January. The UK will formally leave the EU, perhaps even before the 31 January deadline. Johnson will have got Brexit done, as promised.

Once the UK is out of the bloc, the tactic of blaming the EU for economic or political woes won’t wash any more. Any recession or economic pain from leaving the EU on WTO terms or with a bare-bones trade deal will be squarely blamed on Johnson’s government.

Michel Barnier’s team quickly realised that time was their strongest ally during the Article 50 process. So it will be again.

There will be a mere eleven months to negotiate and ratify a new deal across 28 countries and, as Raoul Ruparel, a Brexit advisor to Theresa May and David Davis, has said, the UK is not ‘match fit’ for these talks. The most feasible option could be a basic free trade deal that is then built on gradually.

It would be a mistake to give in to hubris and think that the EU will suddenly change tack. In the three and a half years since the 2016 referendum, the EU has barely blinked, even when Mrs May had a governing majority and was being touted as Margaret Thatcher 2.0. There is no reason to believe that they will cave now.

As Commission chief Ursula von der Leyen warned on Wednesday, the UK would be hurt more by a no deal scenario.

Johnson may be the master at home, but he can’t dictate the terms in Brussels. Another Houdini-esque escape is going to be required to avoid No Deal. It’s going to be fun watching him spend 2020 trying to make it.

A message from Eurogas: Decarbonising Europe’s home heating. #EurogasPoll showed Europeans want to avoid significant costs or major renovations when upgrading a heating system. Gas heating system can run on renewable and decarbonised gas with little to no retrofitting work to do. Click to learn more.

The UK would suffer the most if officials failed to meet a new December 2020 deadline to finalise a post-Brexit trade deal with the bloc, European Commission President Ursula von der Leyen has warned.

Washington’s threat to leave the Open Skies Treaty, a pact allowing countries to conduct surveillance flights over each other’s territory, has left Europeans concerned that yet another landmark arms control accord might suffer the same fate as the Intermediate-Nuclear Forces (INF) Treaty.

US sanctions against the Nord Stream 2 gas pipeline project are a breach of international law and an example of unfair competition, Kremlin spokesman Dmitry Peskov said.

A leading Green lawmaker in the European Parliament has hit out at Italy’s Five Star Movement (M5S) following revelations that Facebook is investigating the party over potential data misuse.

The European Commission is cautious about loosening EU fiscal rules in order to incentivise ‘green’ investment by member states. Valdis Dombrovskis, the Commission Vice-President for the economy, said.

The continuation of the EU-Russia-Ukraine trilateral gas talks with EU Commission Vice-President Maroš Šefčovič in Berlin to lead the next round of ministerial trilateral talks on long-term transit of Russian gas through Ukraine.

3 responses to “The Brief, powered by Eurogas – Master and Commander”