The Brief, powered by IndustriAll Europe – Another leap into the unknown 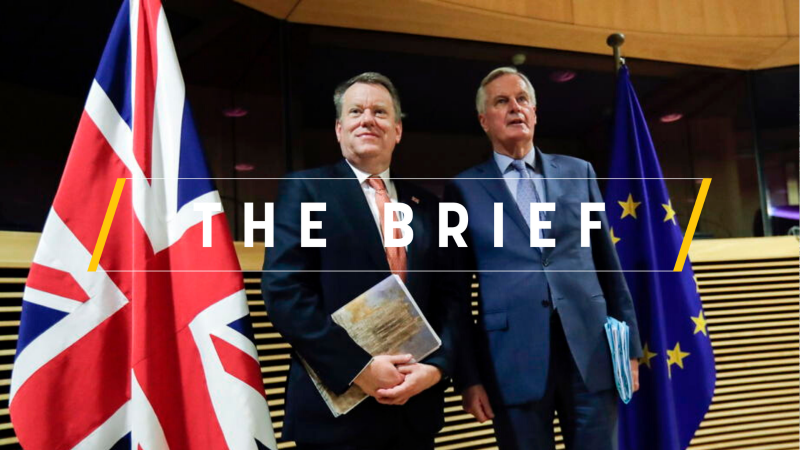 While most of Britain and Europe remain understandably preoccupied with the coronavirus, talks on a future EU-UK trade deal have been largely ignored. But there are less than two months until a summit where Boris Johnson and EU leaders will decide whether a deal can be reached this year, and the UK appears to be in no rush.

On formally leaving the EU in January, Johnson’s government passed a law ruling out the prospect of extending the post-Brexit transition period, during which the UK remains part of the single market, beyond December, by which time a successor trade deal would be agreed.

It was a tight timetable even back then.

Three months later, with only one round of face-to-face talks having taken place, it is hard to find anyone outside Whitehall who believes that it can be met.

What baffles Michel Barnier’s negotiating team the most is what they perceive as the UK’s cavalier attitude. UK officials have refused to budge an inch on their red lines – the role of the European Court of Justice, state aid and regulatory alignment among then. And they have refused to negotiate at all on fisheries.

UK officials retort that the EU also needs to compromise and that Barnier’s team continue to treat the UK as a subordinate rather than a ‘sovereign equal’.

But it is hard to avoid the sense that the UK is not taking these negotiations seriously.

On Monday (28 April), Michael Gove told UK lawmakers that the government would publish a draft legal text in “a matter of weeks”, blithely ignoring the fact that a ‘matter of weeks’ is all that is left until the June summit. Barnier’s team published a 350-page draft text several months ago.

We have, of course, seen this game of brinkmanship repeatedly over the last three years, and Johnson’s allies point out that their man gets results, quickly.

Against the grim backdrop of COVID-19, such tactics defy logic. The International Monetary Fund reckons the UK is facing a 6.5% fall in economic output this year. Every forecast suggests that a WTO Brexit is the most damaging to the UK economy, though most EU economies would also suffer a hit as well.

The pandemic offers an entirely logical reason to pause the talks and extend the transition by at least another year, while both sides focus their energies on coping with and recovering from the pandemic. All but the most ardent of Brexiteers would accept a small delay. Yet the UK seems determined not to take it.

But perhaps we are, again, missing the point. Brexit has always been – in the eyes of its supporters – a leap of faith. The post-COVID economy will be a blank canvas and Johnson and co appear to have decided that it offers as good an opportunity as any to take another jump into the unknown.

A message from IndustriAll Europe: Over the past seven months, industriAll European Trade Union – representing 7 million workers in manufacturing, mining and energy sectors across Europe – ran the ‘Together at Work’ campaign showing that collective bargaining brings solutions. During crises like COVID-19, trade unions fight to secure employment, for safe working conditions and to increase allowances – all through collective agreements.

Stakeholders across the EU are calling for action on medicine shortages, which they say pose severe threats to patient outcomes, patient safety and patient care. A new report hopes to help plug the gap.

Europe cannot win the fight against the coronavirus without digital technologies, the European Commission said in a video call with EU-27 health ministers. But this must not come at the expense of EU data protection rules, which must remain a “global gold standard”.

The EU should stop channelling funds to Libya to manage migration and train its coastguard as it is not a “safe country” for disembarkation of people rescued at sea, MEPs in the European Parliament’s LIBE Committee heard from officials and experts.

The EU should reconsider its ‘all or nothing’ approach on sanctions imposed on Russia for its role in the ongoing conflict in eastern Ukraine, as well as its annexation of Crimea, a new report suggests.

The largest conglomerations of people worldwide at the start of this year could be observed at train and bus stations, airports, city squares and parks.

Energy ministers from the 27 EU member states held their first talks since the coronavirus outbreak, discussing both emergency measures to ensure supply security and longer-term plans for the recovery phase.

In Germany, the coronavirus health crisis is keeping politics on tenterhooks as many legislative proposals are being postponed. Will the country’s coal phase-out carry on as planned?

Check out this week’s Transport Brief which includes a return to business for some carmakers, a change of course in the aerospace industry and the newest episode of the vlog.

EU transport ministers will discuss how to get services like air travel back in operation during an e-meet. The College of Commissioners will discuss COVID-19’s impact on tourism, the MFF revision plan, and the Commission’s contribution to the EU leaders’ video conference with Western Balkan leaders.

9 responses to “The Brief, powered by IndustriAll Europe – Another leap into the unknown”