The Brief, powered by IPA Europe – Deal or no deal, the Irish question remains 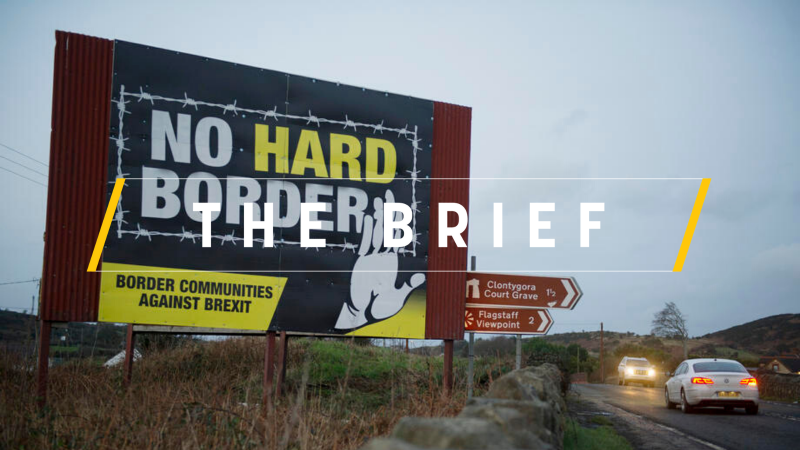 With a month until Boris Johnson and Ursula von der Leyen agree on whether an EU-UK trade pact can be finalised this year, it is hard to find anyone who thinks a ‘no deal’ scenario is not the odds-on favourite. Progress has been, to be kind, minimal, and the UK shows no interest in extending the talks beyond the end of its post-Brexit transition period in December.

But future EU-UK trade is not the only deal facing a December deadline. The Irish protocol, designed to avoid a hard border between Northern Ireland and the Republic, will have to be implemented from New Year’s day 2021, regardless of whether a new trade deal can be obtained and ratified.

Under the Withdrawal Agreement signed off in January, the UK is legally bound to implement the protocol – but with seven months to go, it is unclear how it will be done in practice.

The UK’s Cabinet office reckons that 50,000 additional customs officers will be needed to cope with the new customs arrangement, but little progress appears to have been made in hiring and training them.

After the last round of talks in late April, Michel Barnier said that while the UK team was “bullish and confident” that they would be ready, the EU had seen no evidence that preparations are being made.

Nor does Boris Johnson’s government – busy re-building relations with the Democratic Unionist Party which opposed the Withdrawal Agreement – want to talk publicly about what physical infrastructure will be put in place in Northern Ireland.

The unexpected row over whether the EU should be allowed to have an office in Belfast after the transition period ends has compounded the uncertainty.

The Commission had planned to set up the office to help oversee the implementation of the Northern Ireland protocol. But the UK has rejected the proposal out of hand, saying that an EU office in the province would be “divisive in political and community terms”. Another impasse, and another reason for mutual suspicion.

Still in the process of recovering from the coronavirus which hospitalised him, and consumed with his government’s plans for the UK’s recovery from the pandemic, Johnson has more pressing problems.

But more rancour over Northern Ireland and its status in the UK would be a disaster for Johnson and his government.

Northern Ireland voted to stay in the EU back in 2016, and its voters backed pro-Remain parties in last December’s Westminster election that gave Johnson his landslide. Turmoil over the protocol is likely to bring the question of a united Ireland back onto the table.

A no-deal Brexit, with EU-UK trade reverting to World Trade Organisation terms, would mean tariffs on farmers and businesses in the province.

The harder the Brexit, and the greater the divide between Northern Ireland and the Republic, the more likely Irish unity will become. That, if nothing else, should give Johnson pause for thought.

A message from IPA Europe: An increasing variety of probiotic products are available in different regions of the world, and the European consumers can purchase via e-commerce products from outside Europe. This represents a loss for the European economy. However, consumers are also exposed to any kind of product bearing the term “probiotic”. The President of IPA Europe, Esben Laulund, claim for a coordinated approach in Europe for this dynamic sector. Find more on the IPA Europe Manifesto

Attention, your summer might be saved. The European Commission set out plans for a phased restart of travel this summer, proposing a gradual lifting of borders in an attempt to kick start a tourism sector hit hard by the COVID-19 pandemic.

European Commission guidelines on resuming virus-disrupted transport links do not address whether airlines should block out the middle-seat of aircraft or not. The aviation industry had insisted that social-distancing measures are not viable on planes. Meanwhile, legal action looms for EU’s ‘voucher-gate’ clique.

More than 100 members of the European Parliament and member states’ national assemblies have called upon EU health ministers to lobby for Taiwan’s participation in next week’s World Health Assembly in Geneva to share its experience in tackling the COVID-19 pandemic, according to an open letter obtained by EURACTIV.

A recently launched EU-funded mobile application records users’ breathing and coughing to diagnose cases of COVID-19, scientists involved in the project have said. Meanwhile, the European Commission has said that the ‘largest possible participation’ of EU citizens is required in order for coronavirus contact tracing applications to work effectively.

The European Commission announced eight research projects aimed at developing treatments and diagnostics for the coronavirus have been selected for funding in a fast-track call for proposals.

EU countries should avoid slashing defence spending under pressure from the economic fallout of the coronavirus, the EU’s chief diplomat Joseph Borrell said, warning that the COVID-19 crisis could spark unforeseen security challenges.

The economies of Central Europe and the Baltic states are seen contracting by 4.3% on average in 2020, according to a report by the European Bank for Reconstructing and Development (ERBD).

The EPP group called for an EU law to prevent oligarchs and land-grabbers drawing on EU subsidies at the expense of small and medium-sized farming businesses. The practice is widespread in countries in Eastern Europe and Italy.

Ukraine passed a banking law preventing the return of insolvent banks to previous owners, removing the last obstacle for getting aid from the EU and the International Monetary Fund.

With the long-awaited Farm to Fork strategy due to be unveiled in the coming days, EURACTIV took a look at the potential insect-based food holds for contributing to the goals of the strategy and creating a more self-reliant, sustainable food system in the EU.

EURACTIV family is reaching out to you, the reader. As news revenue has been heavily impacted by the current crisis, we are asking you to support us so we can keep delivering top quality content, including this newsletter you may be reading right now. That is because everyone at EURACTIV is a firm believer in journalism that covers the EU in a clear and unbiased way and shouldn’t need to be accessed via a paywall.

We are therefore asking you to consider making a contribution. All you need to do is follow this link.