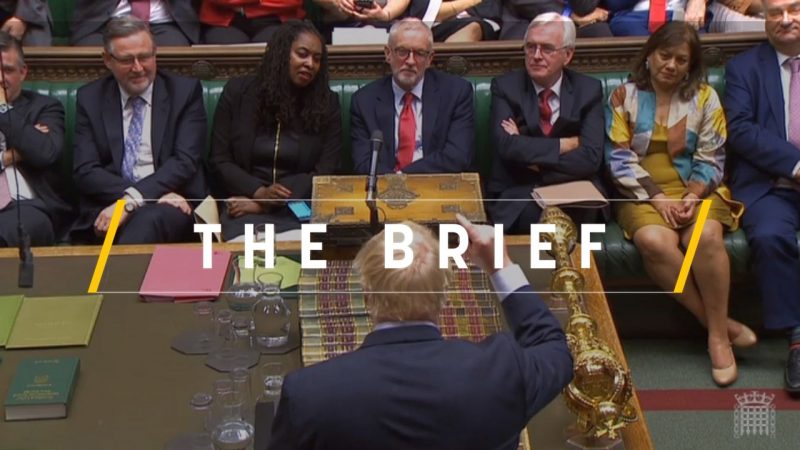 Boris Johnson is naturally a cheery individual, but he truly had every reason to smile on Thursday. First, he secured a Brexit deal that even a week ago nobody thought he could. Then he got Jean-Claude Juncker to do his dirty work to get UK MPs to back it.

When the deal to replace the all-important Irish backstop was announced this morning and the Democratic Unionist Party said that they would not support it, the numbers for getting it through the House of Commons simply did not add up.

An extension would be required and Johnson’s oft-repeated promise that the UK would ‘leave the EU come hell or high water on 31 October’ would have to be broken.

“We have concluded a deal. So there is not an argument for delay. It has to be done now. The British need to make sure that the deal passes,” Commission chief Jean-Claude Juncker said at a joint press point with Johnson.

A few minutes later, doorstepped by reporters, he unequivocally ruled out giving the UK a three-month extension if lawmakers reject it.

Of course, Juncker is a couple of weeks from retirement and would like to see Brexit concluded on his watch. More importantly, he does not speak for the member states, some of which might be more comfortable with more time to pore over the legal text.

Indeed, Juncker’s remarks have already caused plenty of disquiet even though the EU27, unsurprisingly, wants the interminable Brexit process to be done and dusted.

Other EU officials have said that if UK parliamentarians vote the deal down on Saturday, EU leaders would probably still grant an extension.

Either way, Juncker’s remarks were probably worth a handful of votes and given how icy cold relations were between Brussels and the UK just days ago, it is remarkable how helpful EU leaders are being in allowing Johnson to frame Saturday’s showdown in Westminster as being his deal vs no deal.

There are still a few hurdles to cross and possible twists in the road. UK lawmakers probably have one last chance to stop Brexit by conditioning their support for the Brexit deal on it being put to a referendum.

Suddenly his pathway looks much clearer.

Message from Technology Industries of Finland:
R&I is one of the main factors of global competitiveness, the EU´s ambition must be to at least align its investment with that of its main competitors. EU trade actions in the international dimension.

We have a Brexit deal! EU and UK negotiators agreed a new Brexit deal, prompting the bloc’s chief negotiator, Michel Barnier, to declare: “Brexit is a school of patience”.

Northern Ireland’s DUP announced it cannot support Boris Johnson’s Brexit plan due to concerns over ‘customs’ and ‘VAT’ issues, in a major blow to the British prime minister just hours before he is due to appear in Brussels for last-ditch talks on a Brexit agreement.

While EU leaders discuss indoors, Pro Europa organised an event protesting Brexit in the shadow of the European Council.

After struggling for months to find a common line on arms exports, Paris and Berlin reached a compromise during a bilateral ministerial meeting in the French city of Toulouse.

Officials from North Macedonia and the Visegrad Four nations attempted to rally the importance of enlargement on Wednesday, in a last ditch effort before today’s EU summit.

Achieving climate neutrality requires “significantly larger” amounts of funding than what is currently on offer in the EU’s long-term budget proposal for 2021-2027, Warsaw said in a memo circulated ahead of an EU leaders’ summit opening

Huawei implored the EU to grasp their future ‘digital sovereignty’, as the company fielded questions from a cross-section of MEPs in Brussels.