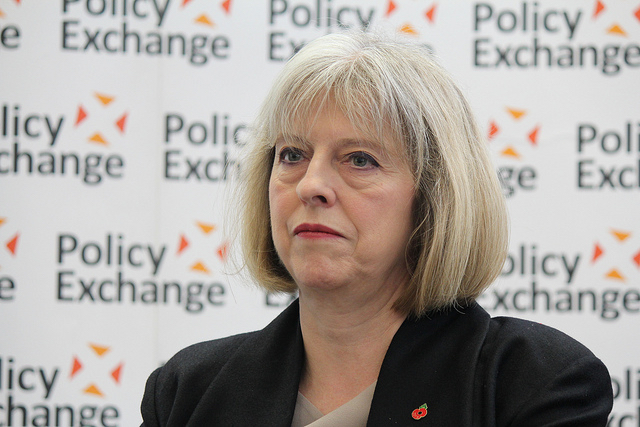 As the front runner for the Conservative leadership, Theresa May could be leading negotiations on the UK's withdrawal from the EU. [Policy Exchange/Flickr]

Interior minister Theresa May vowed to unite Britain as she launched her bid to succeed David Cameron as prime minister with a letter to The Times, the newspaper reported Wednesday (29 June).

The Conservative leader resigned in the wake of Britain’s vote to leave the European Union in a 23 June referendum that sent shockwaves through the continent.

Like Cameron, May supported remaining in the bloc but played a low-key and conciliatory role in the campaign that has seen her tipped as a unifying figure.

In her letter, May announced a “mission to make Britain a country that works for everyone,” according to the broadsheet.

“If you’re from an ordinary, working-class family, life is just much harder than many people in politics realise,” May wrote.

The appeal to working-class voters by the vicar’s daughter was aimed at her main rival for the leadership, the Latin-quoting former mayor of London and prominent “Leave” campaigner Boris Johnson, who projects a more upper-class image.

Cameron promoted May, 59, to Home Secretary following his 2010 election victory and she kept the role after his 2015 re-election.

Known as a hardliner on immigration, May’s stern demeanour and wardrobe of sober suits have drawn comparisons with 1980s Prime Minister Margaret Thatcher.

Britain should consider leaving the European Convention on Human Rights because it interferes with the government's ability to fight crime and control immigration, Home Secretary Theresa May said on Saturday (9 March).

Cameron’s successor is expected to take office in early September. The new Conservative leader, who will be chosen by a postal ballot of party members currently numbering around 150,000, is expected to be announced on 9 September.

Bookmakers have Johnson as a slight favourite over May and The Sun reported Wednesday that he had already secured the backing of 100 of the 330 Tory MPs who will whittle down the field to two nominees.

The ConservativeHome blog surveyed more than 1,300 members and found the slimmest of leads for May, mirroring the results of a YouGov poll published Tuesday (28 June).