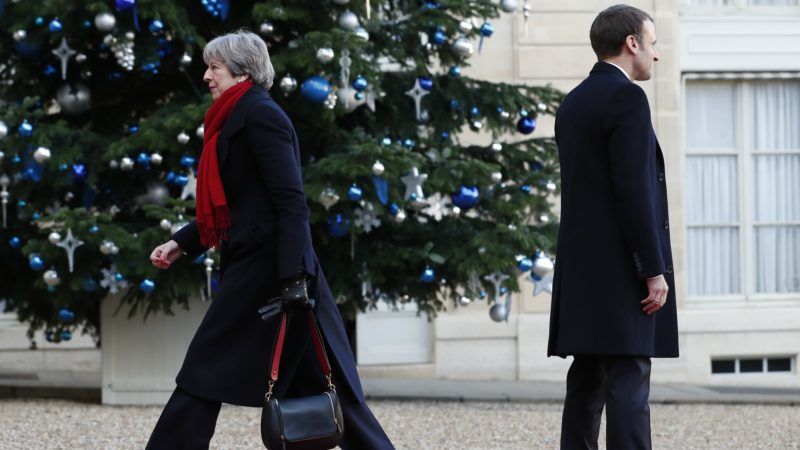 British Prime Minister Theresa May (L), walks towards the palace after greeting French President Emmanuel Macron (R), upon arrival at the Elysee Palace for a lunch as part of the One Planet Summit held in Paris, France, 12 December 2017. [Ian Langsdon/EPA/EFE]

In a blow to May, already weakened after losing her Conservative Party’s majority in a June election, the 650-seat parliament voted 309 to 305 in favour of an amendment to hand lawmakers more say over a final exit deal with the EU.

Up until the last minute of an often bitter debate in parliament, May’s team tried to convince lawmakers in her party to give up their demands and side with a government fearful that the move will weaken its hand in tough Brexit negotiations.

MPs are debating the EU withdrawal bill, which will repeal the 1972 legislation binding Britain to the EU and copy existing EU law into domestic law to ensure legal continuity after ‘Exit Day’ on March 29, 2019.

In focus on Wednesday was an amendment put forward by Conservative lawmaker and former attorney general Dominic Grieve who wants parliament to have a meaningful vote on any deal before it is finalised and for it to be written into law.

Hard Brexiteers are effectively marching Theresa May off a cliff at gunpoint: after tonight we know there’s every chance she can’t get the deal they want through the Commons, but they won’t settle for anything less and will likely sack her if she tries to soften it

“There is a time for everybody to stand up and be counted,” Grieve told parliament earlier, criticising some fellow members of the Conservative Party for calling him a traitor over his decision to vote against the government.

He dismissed a last-minute pledge by justice minister Dominic Raab for government to write the promise of a meaningful vote into law later on its journey through both houses of parliament as coming “too late”.

The government was “disappointed” by the vote, a spokeswoman said in a statement, adding that “this amendment does not prevent us from preparing our statute book for exit day”.

But with May due at an EU summit on Thursday to encourage the other 27 leaders to approve a move to the second phase of Brexit talks and begin a discussion about future trade, the defeat comes at a difficult time for the prime minister.

Proud to have signed and voted for #Amendment7 to the #EUWithdrawalBill. Today is a crushing defeat for Theresa May's Government and a huge victory for parliamentary democracy. The Brexiteers should have supported this…after all it is taking back control #TakeBackControl

In the European Parliament, which must also ratify any withdrawal treaty with Britain, its Brexit coordinator cheekily tweeted that his British counterparts had “taken back control” – a reference to the catchphrase of pro-Brexit campaigners.

British Parliament takes back control. European and British Parliament together will decide on the final agreement. Interests of the citizens will prevail over narrow party politics. A good day for democracy. https://t.co/yV6e6FjWWG

The EU withdrawal bill has been the focus of seven days of often bitter debate, underscoring the deep divisions over Brexit not only among the Conservatives but also in the main opposition Labour Party and across the country.

It has also highlighted May’s weakness.

In June, she gambled on a snap election to strengthen her party’s majority in the 650-seat parliament but instead bungled her campaign and ended up with a minority government propped up by the 10 votes of a small, pro-Brexit Northern Irish party.

Since then she has struggled to assert her authority over a Conservative Party which is deeply divided over the best route out of the EU.

“This defeat is a humiliating loss of authority for the government on the eve of the European Council meeting,” Labour leader Jeremy Corbyn said in a statement.

Since the referendum, we have made the case for a meaningful vote in Parliament on the terms of Brexit – this defeat is a humiliating loss of authority for Theresa May and her government #Amendment7 https://t.co/dIvt6sUPvV

“Theresa May has resisted democratic accountability. Her refusal to listen means she will now have to accept Parliament taking back control.”

Earlier, May had tried to persuade lawmakers to vote with the government for her Brexit blueprint, saying Grieve’s amendment would put added time pressure on a government which wants to make Britain ready to leave the EU in March 2019.

“That could be at a very late stage in the proceedings which could mean that we are not able to have the orderly and smooth exit from the European Union that we wish to have,” she told parliament before an hours-long debate on the exit plan.

Her spokesman said the government had “in good faith come forward with a strong package of concessions to deal with the spirit of the amendment”.

Pro-Brexit lawmakers fear the amendment could force Britain to weaken its negotiating stance by offering parliament the opportunity of forcing ministers back to the negotiating table if it feels any final deal is not good enough.

Raab said that could convince the EU that Britain would not walk away from a bad deal.

“Actually if that looked likely we’d end up with worse terms, and we’d be positively incentivizing the EU to give us worse terms,” he told parliament.

The fresh blow to May’s authority will renew fears in Brussels about her ability to push through a deal and avoid a disorderly Brexit — something EU President Donald Tusk said this week would involve a “furious race against time” to avoid.

Leaders are expected tomorrow (15 December) to give the green light for a second phase of talks covering a post-Brexit transition phase, and future relations between Britain and the EU, including a possible trade deal.

European Commission chief Jean-Claude Juncker recommended the move after all-night talks with May last week, saying Britain had made “sufficient progress” on its divorce bill, the fate of the Irish border, and protections for European expats living in Britain.

May is expected to tell leaders over dinner today — she will not be at the summit on Friday — that the interim deal “required give and take by both sides, but a fair outcome has been achieved”, a senior British government official said.

The deal was a rare moment of triumph for the British prime minister, who has been struggling to assert her authority since losing her parliamentary majority in a disastrous snap election in June.

But the run-up to the summit has already been marred by a row over suggestions by Brexit minister David Davis that the provisional deal was not legally binding and Britain would not pay its exit bill without a trade deal.

“She will add that she very much welcomes the prospect of moving ahead to the next phase to talk about trade and security, as part of the positive and ambitious future relationship that is in the interests of the UK and the EU, and to reach agreement on an implementation (transition) period as soon as possible,” the official said.

The EU guidelines that leaders will approve on Friday say they will start talks on the transition in January but will not begin discussions on trade until March as it needs more clarity on Britain’s goals, while security and defence will be covered later next year.

Tusk told leaders ahead of the summit that “our unity will be key” in negotiations on Brexit, with the EU still in shock from Britain’s June 2016 vote to become the first ever member state to leave the union.