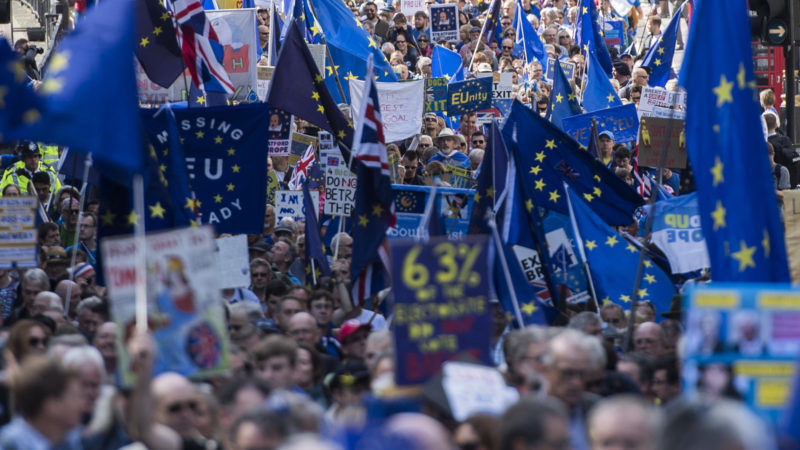 A stream of protesters poured through Trafalgar Square and stopped to boo outside Prime Minister Theresa May’s Downing Street office before congregating at a rally outside parliament.

The self-styled People’s March for Europe comes ahead of a key vote in the House of Commons on Monday night.

“Help! We’re trapped on a small island that’s been taken over by mad people!” read one sign held aloft above a sea of blue EU flags.

“Take back control from these clowns,” demanded a banner featuring photos of senior ministers, while another referenced the divorce negotiations, saying: “This best deal is the deal we’ve got!”

“There’s no good reason for leaving the EU – it’s all bad,” said Beverley Townsend, a 55-year-old from east England, holding up a sign calling for an “exit from Brexit”.

She and her husband Dave, both draped in EU flags, said they had been lifelong supporters of May’s Conservative party but switched to the pro-European Liberal Democrats.

“I don’t believe May listens to anyone, but we’ve got to do what we can to make the point that this will severely harm our country,” Townsend told AFP.

Dr John Wale, who works at Warwick University in central England, brought along his two sons aged 16 and 12, both of them holding up EU flags.

“It’s all so negative. Why would you throw away something that is so beneficial to appease the will of a few fanatics?” he said, adding: “The problem is there are more than a few.”

Louisa Paches, a 39-year-old Spaniard wearing a beret in the design with the EU flag, said she had lived in Britain for 13 years but was now thinking of leaving.

“I don’t feel welcome here,” she said, standing with her French partner and two young children, both of whom have British passports.

MPs will on Monday hold their first vote on a crucial piece of legislation intended to smooth Britain’s departure from the European Union.

The Repeal Bill would formally end Britain’s EU membership and transfer around 12,000 existing EU laws and regulations onto the British statute books.

May’s government is expected to win the vote, but could face rebellions by pro-European members from her own Conservative party as MPs scrutinise the bill in the coming weeks.

May is also under pressure from Conservative Brexit supporters to ensure a clean break when Britain leaves the EU in March 2019, after ministers said they were seeking an implementation period to reduce any disruption.