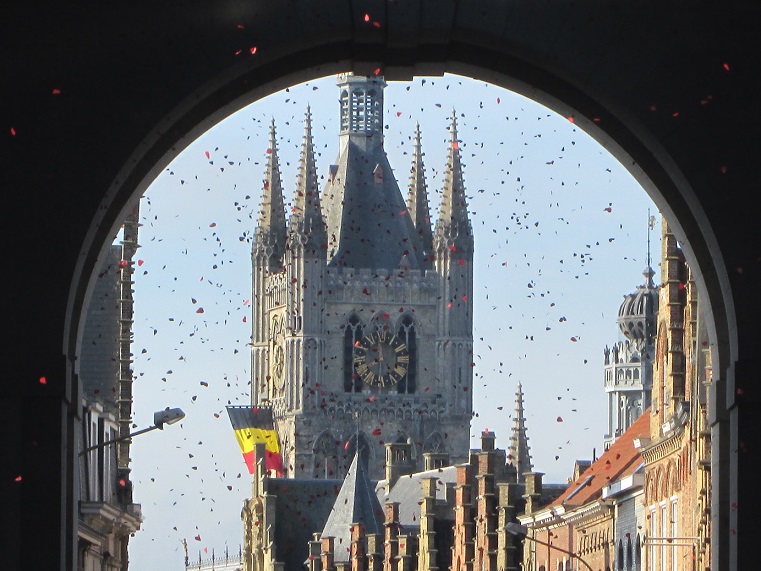 Thousands of people gathered today (11 November) in the Belgian town of Ypres to mourn the millions of soldiers killed in the First World War, which began 100 years ago.

The Flemish town, called Ieper locally, was near the centre of some of the bloodiest trench warfare of the Great War.

British veterans of other wars – no one who served in the First World War is still alive –relatives of the dead, serving soldiers, and representatives of UK police and fire services were there to pay their respects to the fallen.

Today is a public holiday in Belgium, a country that suffered greatly in both World Wars.  Armistice Day is celebrated in many countries to mark the end of hostilities on the Western Front.

Dignitaries such as the lead minister of the Flemish government, and representatives of organisations such as the Last Post Association, welcomed visitors from all over the world for the commemorations.

Ambassadors from France, India, Ireland, Australia, Canada, the USA, and New Zealand attended. Citizens from Belgium, Britain, and all over the world were there to mark the occasion on a chilly but bright morning of prayer, reflection and ceremony. 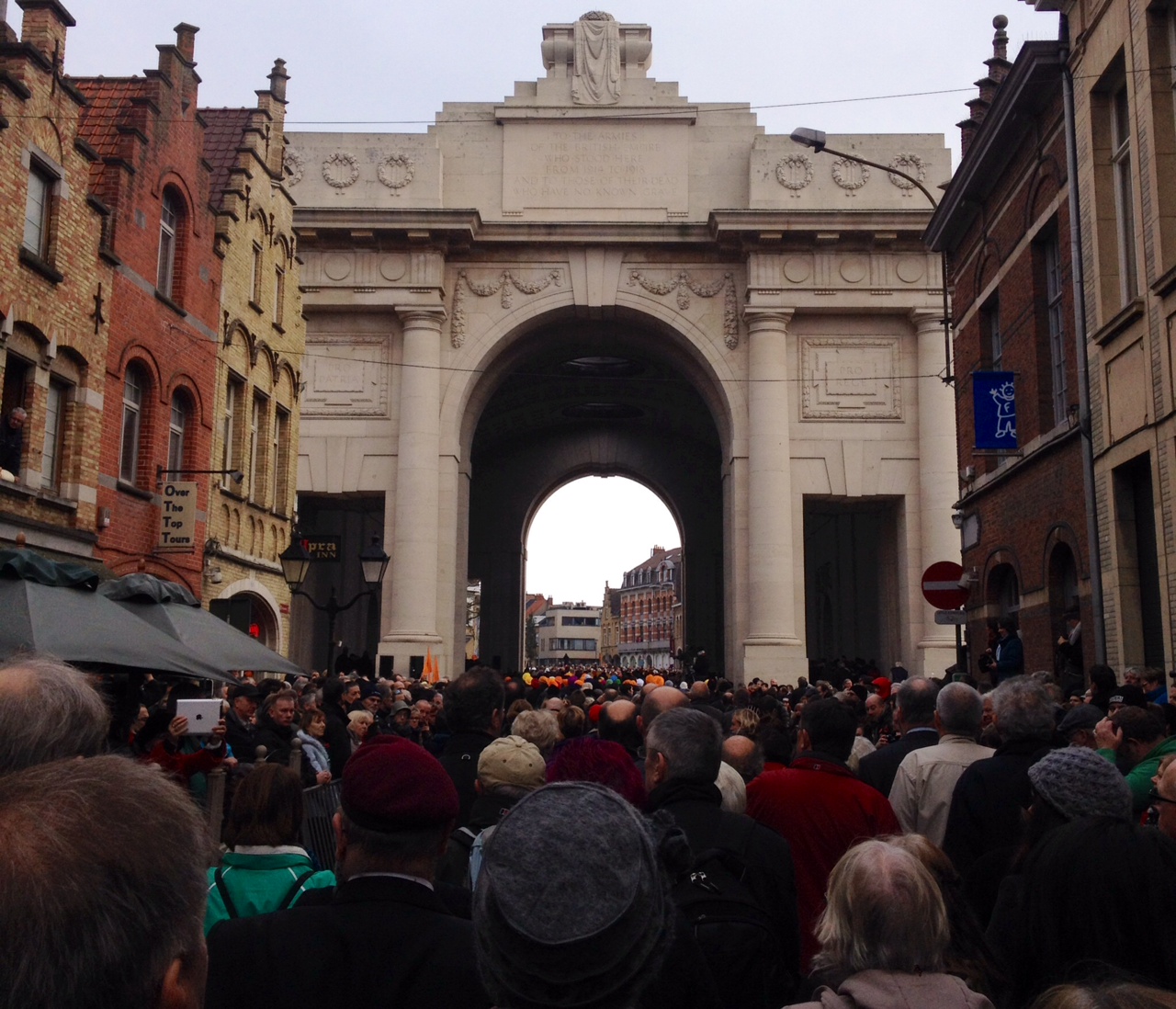 The Poppy Parade moves towards the Menin Gate. [Andreas Gahleitner]

Many wore poppies in their coats. The distinctive red flower became a symbol of the many young men slaughtered on the battlefields, after the publication of the poem In Flanders Fields.

Terence Joseph, 61, has come to Ypres on 11 November every year for 18 years to lay a wreath in memory of the 19 men from his village of Ffrith.

“This year there are a lot more people”, he said. “That’s more and more important as the veterans of the war are no longer with us.”

Dave Pitcher, of Hove, Sussex, said his grandmother had lost her husband and both her brothers in the war.

The 67-year-old said his mother had emigrated back to Britain from Canada after losing her family, meaning he was a British rather than Canadian citizen. 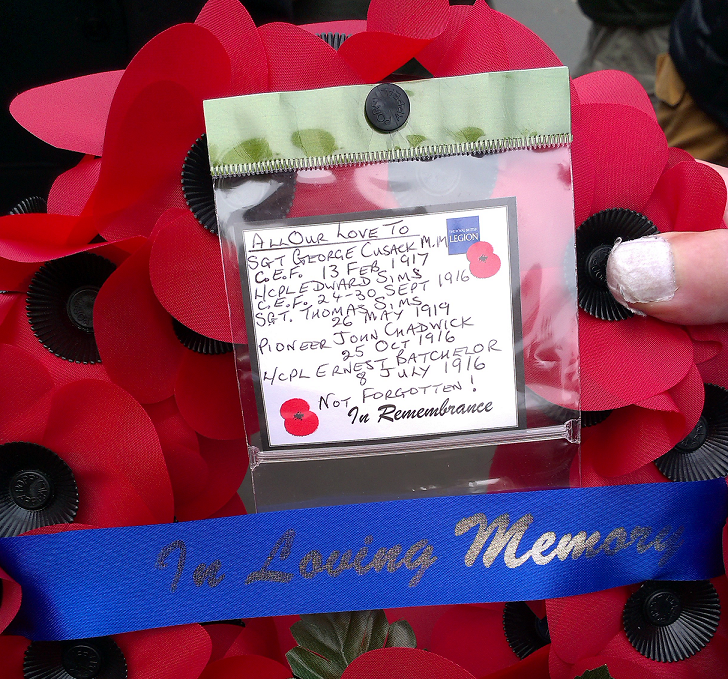 The Menin Gate, a memorial arch in the centre of Ypres, was the focus of a ceremony of remembrance at 11am. It has the names of 54,000 missing men engraved on its walls.

The Gate is built across the road that soldiers would march along, out of Ypres, and towards battle. It was finished in 1927 as a monument.

Every night at 8pm since 1926, Belgian volunteer firefighters have played the Last Post under the gate to remember the dead. Today, they repeated the ritual at 11am for the 29, 759th time.

After prayers in Flemish and English, families of the dead laid wreaths at the Gate, as a choir sang hymns. Finally the British and Belgian national anthems were played. Earlier in the day veterans had heard songs such as “It’s a long way to Tipparary”. 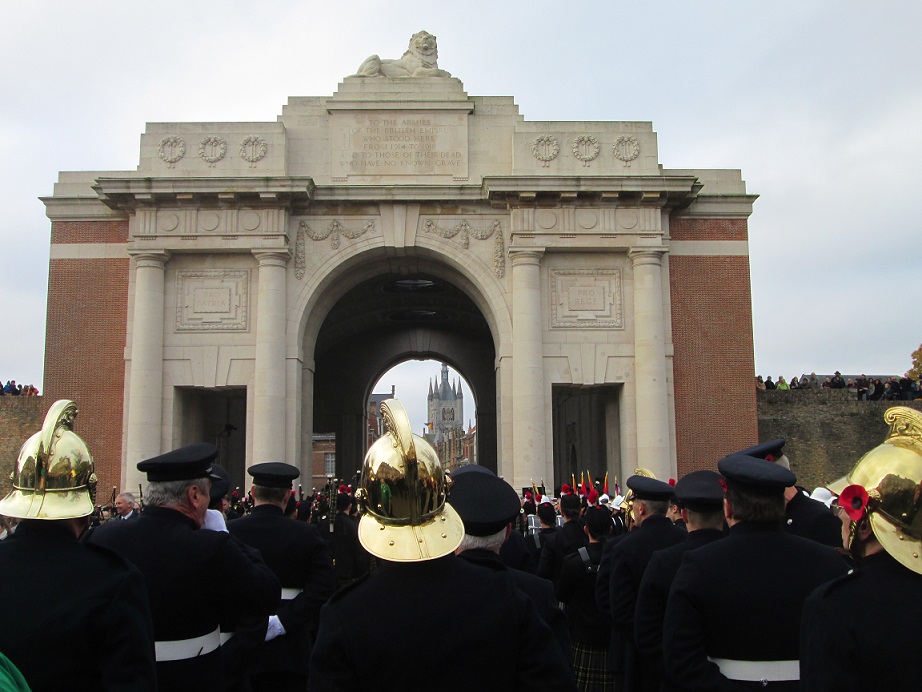 Firefighter, servicemen, and citizens stand together in remembrance of the fallen at the Menin Gate.[James Crisp]

During the ceremony, thousands of poppy petals were thrown from the top of the gate. The petals had been brought there by a parade of mourners.

They had walked through the town’s streets, lined by well-wishers, towards the gate, in an echo of the journey made by so many young men a century ago.

Military and firefighter bands, Scottish pipers, and schoolchildren, as well as British veterans marched through Ypres, at times past crowds four people thick. 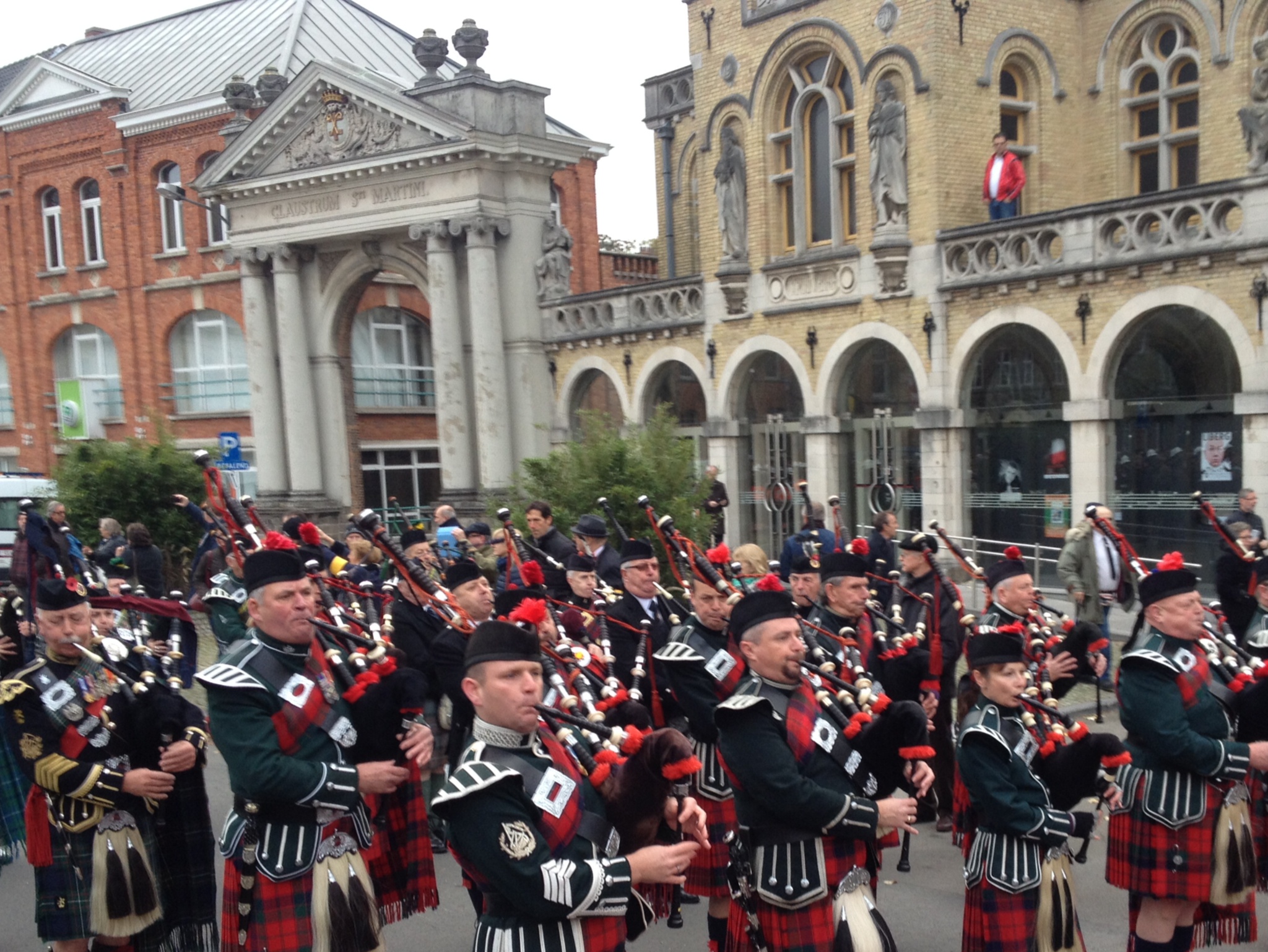 Ypres – known as “Wipers” to the British Tommies based in Flanders from 1914-1918 – was almost entirely levelled by shelling. All that remained was part of the town’s Cloth Hall.

It was later painstakingly rebuilt. The Menin Gate was constructed and finally finished in 1927. The town will continue to be a centre of remembrances as Belgium and the rest of Europe mark the centennial years of the First World War. Today was the first of the centennial commemorations.

After World War Two, many former British Empire countries changed the name of Armistice Day, to reflect the sacrifices made by that later generation of soldiers. They were also remembered today by many during the poignant and moving ceremony.

Joseph Schram, 54, is commander of the American Legion. His family emigrated to the US from Belgium. He now lives in Bruges with his Belgian wife.

The retired soldier, a Dutch-speaker, said the commemorations were incredibly important and would continue for foreseeable history.His sentiments were echoed by the Last Post Association at the ceremony. It has vowed to continue the Last Post ritual “in perpetuity”.

Pub landlord Craig Smith, 31, of Luton, UK, travelled to Ypres in a group of eight. “The men who died were boys really, a whole generation of young men. You see the ages on the graves and it is tragic.”

Wendy Tiernan, 43, also from Luton, said she was particularly moved by how people of all different ages and generations came together to mark the day.

Alain Vansevenant has run a pub off the main square, The Times, for the last 28 years. He remembers being at the Menin Gate, as a 14-year-old. He is now 52.

“Then there were 30 people and now the gate is packed, the square is packed,” he said.

Gordon Erlebach has been coming to Ypres for the last 30 years. A retired member of the Surrey Fire Brigade, he spoke about how local volunteer firemen had, every day, marked the sacrifice of the war dead.

During Ypres’ occupation by the Germans during the Second World War, the Last Post ceremony was held at Surrey Brooke Wood Cemetery.

“How do you repay these men, who do this every day? They won’t take money, of course, so we bring them a few case of beers,” he said.

Gordon mentioned Marcus, an 89-year-old volunteer firefighter, who had played the Last Post for the “last 60 odd years”. 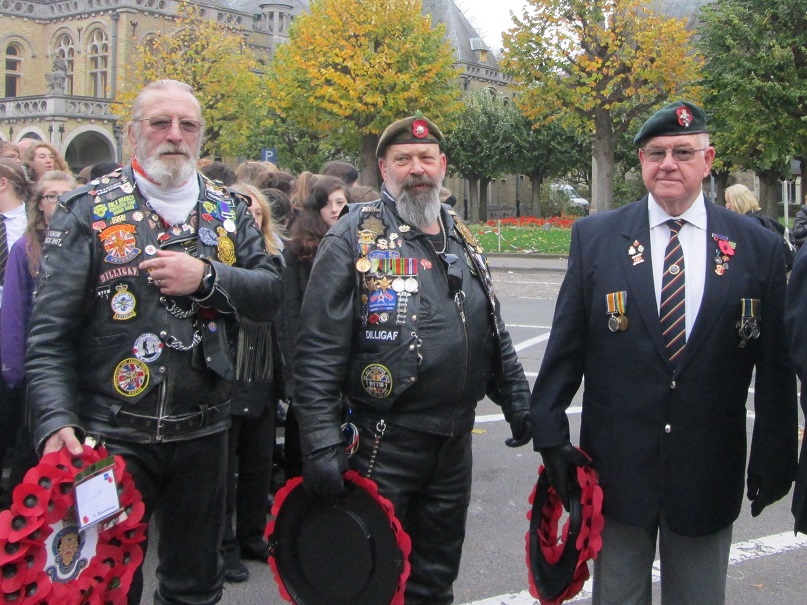 British veterans from many of the UK’s recent wars came together in Ypres. [James Crisp]

The poppy was adopted by the Royal British Legion, a charity for UK servicemen and their families, after In Flanders Fields was published. The legion raises funds to support veterans of all Britain’s wars.

Written by Canadian physician John McCrae after the death of a close friend and fellow solider at the Second Battle of Ypres, the poem was read at the Menin Gate.

“We are the Dead. Short days ago/ We lived, felt dawn, saw sunset glow/ Loved and were loved, and now we lie/ In Flanders Fields”

It ends, “If ye break faith with us who die we shall not sleep, though poppies grow/ In Flanders Fields.”

McCrae died of pneumonia in France in 1918.