Time to build on ‘momentum’ on N.Ireland protocol, say EU and UK 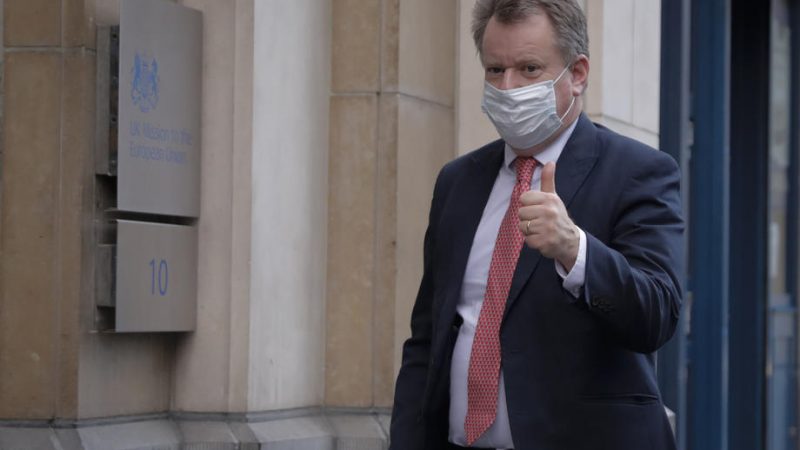 EU and UK officials on Friday stressed the need to build on new 'momentum' in the talks on the controversial Northern Ireland protocol after a week in which the threat of a trade war appeared to recede. [EPA-EFE / OLIVIER HOSLET]

EU and UK officials stressed on Friday (19 November) the need to build on new ‘momentum’ in the talks on the controversial Northern Ireland protocol, after a week in which the threat of a trade war appeared to recede.

“There is the potential to generate some momentum in our discussions,” the UK’s Brexit Minister David Frost said in a statement following the talks on Friday.

Both sides have acknowledged a change in rhetoric in recent days.

UK officials welcomed Friday’s admission by European Commission Vice President Maros Sefcovic that the Protocol, which regulates border checks and the flow of goods between Northern Ireland and the rest of the UK, had led to unintended consequences in Northern Ireland.

Disagreements over the implementation of the protocol, which keeps Northern Ireland in the EU’s single market for goods but imposes customs checks on goods travelling from Britain to Northern Ireland in order to avoid a hard border, had increased the prospect of the Trade and Cooperation Agreement between the EU and UK being derailed less than a year after coming into effect.

Officials say progress has been made on customs checks and on medicines travelling from Britain to Northern Ireland, but insist that significant gaps remain across most issues.

“On medicines, there has been progress but agreement has not been reached,” stated Frost, adding that “any acceptable solution needs to ensure that medicines are available at the same time and on the same basis across the whole of the UK”.

“It is essential that the recent change in tone now leads to joint tangible solutions,” Sefcovic said on Friday, adding that “there is a genuine sense of urgency related to medicine supplies”.

The Commission vice president repeated that the EU was prepared to permanently slash customs paperwork by 50%, along with the removal of up to 80% of checks.

However, the talks on sanitary and phytosanitary checks and governance, including the role of the European Court of Justice, have made little progress, officials conceded.

“A durable solution here requires goods to be able to move essentially freely into Northern Ireland when both sides agree that they are remaining in Northern Ireland,” stated Frost.

However, despite softer UK rhetoric, London is still ready to suspend the protocol by invoking Article 16 – which allows either side to take unilateral measures if they assess the deal is causing serious practical problems or disruption of trade – should a new compromise not be reached.

Frost and Sefcovic will meet again on 26 November in London, though talks are now likely to run into the new year.

That has prompted EU officials to express concern that despite talking up progress, the UK is keeping on the table the threat that could lead to the suspension of the post-Brexit trade agreement

UK officials say the status quo cannot remain unchanged, and describe the use of Article 16 as “a legitimate part of the protocol”.

“Looking forward, the United Kingdom’s preference remains to secure a solution based on consensus.  But any such solution must constitute a significant change from the current situation, materially ease practical problems on the ground, and safeguard political, economic and societal stability in Northern Ireland,” concluded Frost.

One response to “Time to build on ‘momentum’ on N.Ireland protocol, say EU and UK”