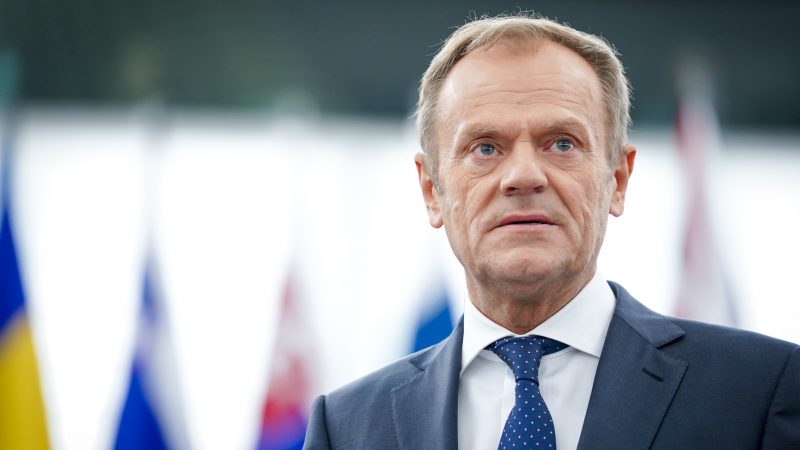 If the British parliament does not represent people who want to remain in the EU, MEPs should, European Council President Donald Tusk told EU lawmakers on Wednesday (27 March) in Strasbourg.

MEPs debated last week’s European Council conclusions, including the EU27 decision to a two-stage extension of the Article 50 process that could eventually lead to the UK holding European elections in May.

“There were voices saying that this would be harmful or inconvenient to some of you. Let me be clear: such thinking is unacceptable,” Tusk told the European Parliament.

The president called on MEPs not to “betray” the 5.8 million people who have asked to revoke Article 50 through a petition, the 1 million who marched for a second referendum last weekend, or those who now want to remain in the bloc.

Tusk warned that 12 April is now “the cliff-edge date” for Brexit while assuming that leaders will probably hold a further summit before then to discuss a longer extension he has strongly supported.

“Thank for what you did in defence of European citizenship,” the leader of the Socialist and Democrats (S&D) Udo Bullman said.

“Nobody can trick the British people into depriving them to participate in Europe democracy,” he stressed.

European Commission Chief Negotiator Michel Barnier said the EU has been working to respect the mandate of the majority of the British people who decided to leave the bloc. “No one in Brussels is trying to steal Brexit from you,” Barnier said.

But he insisted that the ball was in the UK’s court. “It can still stay, everything is possible up until the 12 April,” Barnier said.

The leading member of the Parliament’s Brexit steering committee, liberal leader Guy Verhofstadt admitted he was not as optimistic as Tusk but hoped that “within the future generations” the UK will come back to the EU “because that’s the place of the UK”.

“We have to act in a way that shows respect of those who voted to leave in the referendum,” leader of the leftist GUE/NGL group, Gabi Zimmer said, but also to the marchers, the people who demanded the revocation of Article 50 and those in Ireland and the rest of the EU who are going to be heavily affected by Brexit.

Zimmer stressed the need to ensure that the rights of citizens on both sides of the channel are guaranteed regardless of the Brexit outcome, as a no-deal scenario becomes increasingly plausible.

Verhofstadt also called for unilateral commitments on citizens rights to be formalised “so that whatever it happens, at least the citizens are not the victims of the game that we have seen these past two years.”

No senior Tory members intervened in the debate, leaving Brexit Party leader Nigel Farage, who described last week’s agreement between Prime Minister Theresa May and the EU27 as a “national humiliation,” to label the withdrawal agreement as “a modern form of the Treaty of Versailles.”

Failing to leave the EU on 29 March as promised, “would be the greatest betrayal on our nation’s history,” said Farage.

As a possible long extension raise on the horizon, Farage asked if MEPs wanted Brexit to continue to dominate EU’s agenda.

“Do you really want me back in this place?” asked Farage.

Verhofstadt asked how was possible that Farage was in Strasbourg, as the Brexit campaigner had urged people to march to London to demand that Brexit is delivered by 29 March.

“You will never ever going to take responsibility for the mess you have created, you are responsible for the humiliation,” labour MEP Seb Dance said to the British parliamentarian.

“Apologise to British people for what you have done in the past two years,” urged Udo Bullman.

If Brexit finally takes place without a deal on 12 April, this week’s plenary session will been the last for the 73 British members of the European Parliament, many of whom have spent most of their careers in the corridors of Brussels and Strasbourg, and several deputies used the opportunity to give farewell speeches.

Ulster Unionist MEP James Nicholson was greeted by Irish MEP and Vice-president of the Parliament Mairead McGuinness. If this is your last plenary session, MacGuiness told Nicholson “I will miss you if you leave, but ‘if’ is the word,” the Fine Gael (EPP) MEP joked.

Scottish National Party deputy Alyn Smith denounced Brexit as a “self-inflicted disaster” and criticised the British government for triggering Article 50 without a plan.

“The best Brexit is no Brexit,” said Smith, calling on Europe “not to close the door on us.” If the EU didn’t exist, he said, we would have to create something like it “and Scotland would want to be part of it.”

For his part, Richard Ashworth, a Conservative deputy who  (EPP) denounced consecutive UK prime ministers that did not communicate the benefits of the EU and a media which has run a 20 year campaign against Europe.

“The consequence of that we see today, a sad nation, more divided than ever before and a House of Common in crisis,” Ashworth said.

“Never take it for granted.”