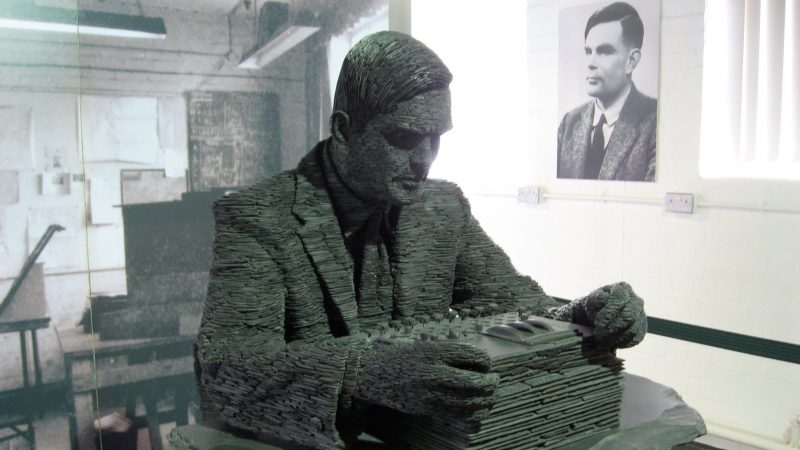 The 1.5 -ton statue of Alan Turing, by Stephen Kettle commissioned by the American billionaire Sidney Frank. This statue at Bletchley Park is made of about half a million pieces of slate quarried in Wales. [Wikimedia Commons]

Britain, while clinching a trade deal with the EU, said Thursday (24 December)  it was backing out of a European student exchange programme and replacing it with a global scheme named after computing pioneer Alan Turing.

Prime Minister Boris Johnson said the UK had made the “tough decision” to pull out of the Erasmus programme for cost reasons.

“Financially the UK exchequer, more or less, loses out on the deal,” he told a news conference announcing the trade agreement, as EU negotiator Michel Barnier expressed regrets at the UK withdrawal.

Instead, Johnson said the UK would launch a new scheme in honour of Turing, a mathematician who is seen as the father of modern computing. He spearheaded a team at Britain’s Bletchley Park that cracked the Nazis’ Enigma code in 1941.

“Students will have the opportunity not just to go to European universities, but to go to the best universities in the world,” the prime minister said.

Since 1987 more than 300,000 UK students have studied or worked in Europe on the Erasmus exchange programme, named after the 15th-century Enlightenment Dutch philosopher.

In 2017 more than 16,500 British students took part in Erasmus, while a further 31,727 EU nationals came to the UK, according to official figures.

The government said it would spell out details of the Turing programme in the coming days, but the demise of the old partnership drew criticism that Johnson was abandoning a core tenet of European integration for younger people as part of Brexit.

“There will be lots of focus, rightly, on the economic costs of Brexit,” Scottish First Minister Nicola Sturgeon tweeted.

“But ending UK participation in Erasmus, an initiative that has expanded opportunities and horizons for so many young people, is cultural vandalism by the UK government.”

The story was turned into a 2014 movie called “The Imitation Game”, starring Oscar-nominated British actor Benedict Cumberbatch as Turing.