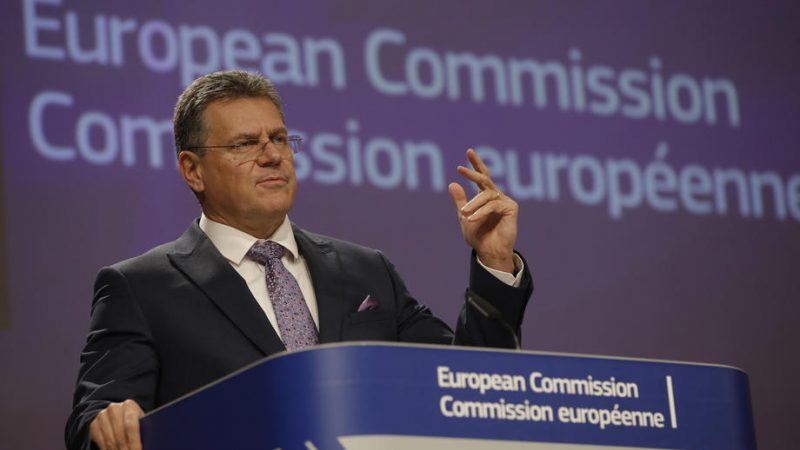 The European Commission is set to reopen infringement proceedings against the UK that could lead to the collapse of the post Brexit trade deal after London on Monday tabled a new law designed to unilaterally overhaul the Northern Ireland protocol. EPA-EFE/OLIVIER HOSLET

The European Commission is set to reopen infringement proceedings against the UK that could lead to the collapse of the post Brexit trade deal after London on Monday tabled a new law designed to unilaterally overhaul the Northern Ireland protocol.

The draft bill’s main provisions include measures to scrap costs and paperwork for businesses trading within the UK, while ensuring that full customs checks are done for goods entering the EU.

Businesses will also be given the choice of placing goods on the market in Northern Ireland according to either UK or EU goods rules. It also changes the governance arrangements so that disputes are resolved by independent arbitration and not by the European Court of Justice. The UK government hopes to have it adopted by parliament before the summer recess.

Foreign Secretary Liz Truss said that while the UK wanted to reach an accord with Brussels on the protocol, the “only make progress through negotiations if the EU are willing to change the protocol itself”.

“At the moment, they aren’t,” she added.

The protocol was negotiated and agreed by UK Prime Minister Boris Johnson as part of the Brexit deal that took the UK out of the bloc in 2020 but its status has always been controversial. Last year, talks between UK and EU officials reopened in a bid to ease the implementation of the protocol but have made little progress.

European Commission Vice President Maroš Šefčovič said that the bill was “damaging to mutual trust and a formula for uncertainty” and warned that the EU would now consider whether to continue the infringement procedure launched against the UK government in March 2021. That decision, expected to be made this week, could lead to sanctions against the UK including the suspension of the post-Brexit Trade and Cooperation Agreement.

Irish Taoiseach, Micheal Martin, said that it was “very regrettable for a country like the UK to renege on an international treaty”.

“I think it represents a new low point because the natural expectation of democratic countries like ourselves, the UK and all across Europe is that we honour international agreements that we enter into,” he added.

Meanwhile, 52 of the 90 members of the Northern Ireland assembly, representing the Irish nationalist parties Sinn Fein and the SDLP, and the non-sectarian Alliance party, on Monday signed a letter to Johnson described the protocol as “a product of the hard Brexit you personally championed and a withdrawal deal you personally signed.”

“Whilst not ideal, the protocol currently represents the only available protections for Northern Ireland from the worst impacts of that hard Brexit. The protocol also offers clear economic advantages to our region, and the opportunity for unique access to two major markets,” they added.

However, no assembly members from the three unionist parties in the Northern Ireland assembly, all of whom want the protocol to be scrapped or significantly revised, signed the letter.

Sinn Féin’s leader in the assembly, Michelle O’Neill, who is set to become the First Minister of the next devolved government in Northern Ireland, accused the prime minister of breaking the terms of the Brexit agreement.

“Boris Johnson’s action is illegal, he is in clear breach of international law, regardless of the detail,” she said.

There are concerns from some Conservative lawmakers in Johnson’s party that overriding the protocol amounts to a lack of good faith and could undermine the UK’s reputation for upholding the rule of law. That is of particular concern to Johnson following last week’s vote of confidence, in which 148 of his 359 MPs stated that they had no confidence in his leadership, with many hinting that they would vote against laws brought forward by his government.

However, in legal advice related to the bill UK government lawyers insist that “this is a genuinely exceptional situation and it is only in the challenging, complex and unique circumstances of Northern Ireland that the government has, reluctantly, decided to introduce legislative measures which, on entry into force, envisage the non-performance of certain obligations.”

The legal advice also cites Article 16 – a clause in the Protocol that allows either side to take measures if applying the protocol leads to serious economic, societal or environmental difficulties that restrict trade. The unionist community, and the UK government, argue that, by undermining Northern Ireland’s status in the UK, the protocol is harming trade, and also damaging political stability in Northern Ireland.

Since last month’s Assembly elections, where Sinn Fein topped the poll, the second placed party, the Democratic Unionist party, has refused to agree to the formation of a new power sharing executive until its concerns about the protocol are resolved.

DUP leader Jeffrey Donaldson defended the new UK bill as “a solution – and we need solutions”, adding that his party would “continue to work with government to ensure that this legislation progresses.”