Britain's Article 50 negotiations on the terms of its exit from the EU are following the pattern of its membership of the bloc. [Andy Rain/EPA/EFE]

“The public have very little confidence that will we get a good deal,” says Professor John Curtice, one of Britain’s most pre-eminent political scientists.

So time for a Brexit re-think? Some think so. Over 100,000 people gathered in London on Saturday for the People’s Vote march to campaign for a second referendum, culminating in a rally outside Parliament.

Not so, say Curtice and other leaders of the UK in a Changing Europe think-tank told reporters on Friday (22 June).

The truth is, unsurprisingly, that few people have changed their minds since June 2016. 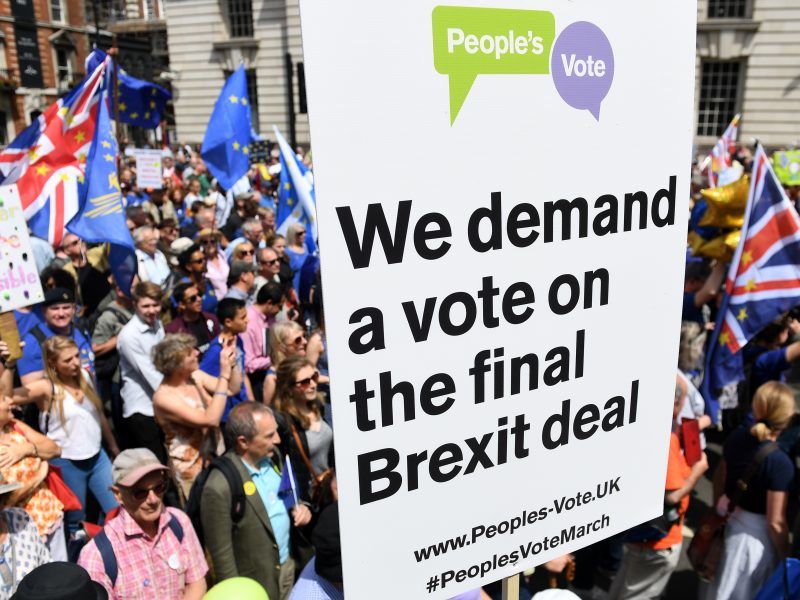 “We haven’t embraced it, we haven’t turned against it, we’re exactly split down the middle. It’s very hard to think of an outcome that could obtain majority support,” says Professor Anand Menon, who fronts the think-tank.

Remain supporters think that Theresa May’s government is handling the talks badly by a 25% margin. However, Leave voters blame the EU’s handling of the talks for the impasse by a similar margin.

A poll by Survation on Friday (22 June) suggested that Britons would vote to stay in the EU by a 53-47 margin. But Curtice warned against reading too much into that.

“About 9 out of 10 voters would do exactly the same at the ballot box,” he said.

“The lead for Remain is because most people who didn’t vote now back Remain. The truth is that the outcome of a second referendum would depend on turnout, particularly by young voters.

“It is frankly an iron law of voters that young voters are less likely to turnout,” he says.

In any case, the nine surveys on a repeat referendum suggest a Remain win by a 52-48%. That is “too close to call,” says Curtice, and, in any case, a clear majority of Britons oppose a second poll.

Similarly, there is a partisan divide on soft v hard Brexit. Remain voters, who also tend to support the opposition Labour party, back a ‘soft Brexit’ involving single market or customs union membership, Leavers – themselves predominantly Conservative voters – want a ‘hard Brexit’ outside all EU jurisdiction.

On Friday morning, Airbus is the first big company to be explicit about the fact that they are considering their future in the UK because of Brexit.

“I think that economic perceptions do matter,” he said, adding that “pessimism about the economy is more likely to change people’s minds than the perception that the talks are going badly.”

However, he pointed out that, as with the Brexit talks, Britons’ perception of the economy is largely dependent on how they voted in the referendum. Leavers tend to be more optimistic.

“I have no earthly clue on how they will resolve this,” said Menon of the Irish border question.

“The UK government thinks that the longer this runs on that the Irish government is more likely to back down,” he argued.

But if there is an impasse within the UK government and between Theresa May and Michel Barnier, the EU’s chief negotiator, what will a Brexit agreement eventually look like?

“It looks like the sort of deep free trade agreement that Theresa May has been working on for the past year is simply not on the table,” said Menon.

“In Whitehall, the thoughts are crystalising around a Canada-style deal with all the problems that comes with, or a way of dressing up the status quo.”

For his part, Curtice contended that “decoupling single market membership from freedom of movement would be the easiest to sell politically”.

“The crucial thing is a sense that we have some sort of control (on migration),” he added.

But they agreed that next six months will be crucial, and that Theresa May’s troubles in keeping her government together and in power will continue.

“By the time we get to autumn the prime minister is going to have to make some choices, and the nature of those choices is that she will disappoint. I can conceive of a soft Brexit getting through parliament but I just can’t see how the government can survive it,” said Menon.