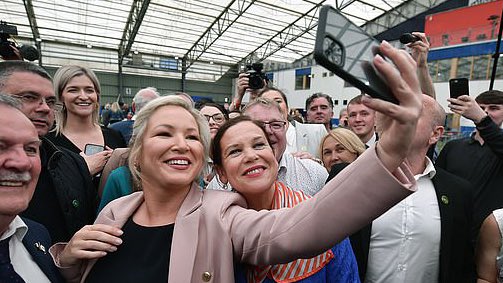 The UK appears to be heading for a major political crisis in Northern Ireland after the leader of the largest Unionist party, which finished second in last week’s Assembly elections, said that he would block the formation of a new devolved government in Belfast. [Michelle O'Neil Twitter account]

The UK appears to be heading for a major political crisis in Northern Ireland after the leader of the largest Unionist party, which finished second in last week’s Assembly elections, said that he would block the formation of a new devolved government in Belfast.

Following talks with Westminster officials on Monday, Sir Jeffrey Donaldson, the Democratic Unionist Party leader, said he will not nominate ministers to the Stormont executive later this week unless Boris Johnson’s government takes “decisive action” on the Northern Ireland protocol.

The DUP lost its position as the largest party in the Northern Ireland assembly and, therefore, its right to nominate the devolved government’s first minister to the Irish republican party Sinn Fein last week. Sinn Fein won 27 seats to the DUP’s 25 in the Belfast assembly, and its leader Michelle O’Neill is set to become the next first minister, the first time Sinn Fein will hold the post.

However, under power-sharing rules, the executive must have support from the largest Irish nationalist and pro-British unionist parties and so cannot form unless the DUP nominates a deputy first minister and other ministers.

Months of talks between EU and UK officials aimed at simplifying the application of the protocol to minimise disruption for businesses have made glacial progress since last autumn.

UK ministers have hinted that they could table domestic legislation to override the protocol, which introduces customs checks on British exports to Northern Ireland and has caused controversy among the Unionist community because it effectively carves Northern Ireland out of the UK’s internal market.

However, such a bill is not expected to be included in the Queen’s speech in Westminster on Tuesday, which will set out the government’s legislative priorities.

The DUP has been campaigning for the protocol to be scrapped, although some DUP members, and other more moderate unionists, say that they would settle for reform of the protocol.

In response, O’Neill accused the DUP of “brinkmanship”, which, she said, “will not be tolerated where the north of Ireland becomes collateral damage in a game of chicken with the European Commission.

“Make no mistake, we and our business community here will not be held to ransom.”

For her part, Naomi Long, the leader of the non-sectarian Alliance party, which finished third in the Assembly elections with 17 seats, commented that “with power comes responsibility, and people now need to take the responsibility seriously.”

However, EU officials have long been frustrated by the UK’s position, given that Boris Johnson’s government negotiated and agreed on the protocol as part of its Brexit deal less than two years ago. Earlier on Monday, European Commission Vice President Maros Sefcovic said the UK needed to “be honest” about what it had agreed to in the protocol.

“We need the UK government to dial down the rhetoric, be honest about the deal they signed and agree to find solutions within its framework,” he said in a statement, adding that the UK should “show genuine determination and good faith to make the protocol work, rather than looking for ways to erode it”.

He added that the EU has “absolutely no interest in interfering in the UK’s internal affairs.”