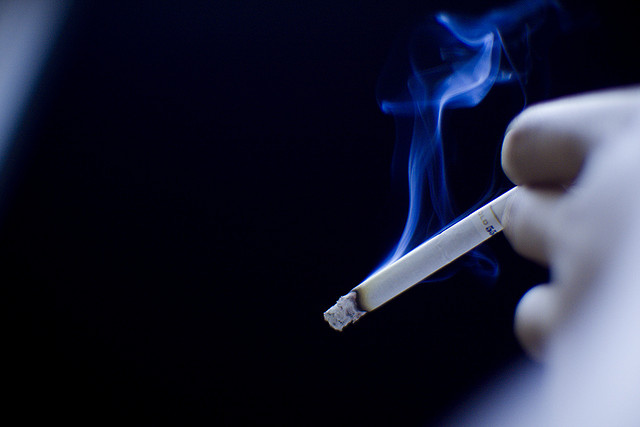 According to the WHO, smoking kills six million people a year worldwide. [DucDigital/Flickr]

Peers agreed to the change without a vote after MPs overwhelmingly approved the move last week, despite fierce opposition from the tobacco industry.

The law will come into effect in May 2016, a year before similar legislation passed in Ireland last month is fully implemented, and four years after Australia made the change. Smoking rates have fallen in Australia since then, although tobacco companies have blamed the decline on tax hikes.

Deborah Arnott, chief executive of health charity Action on Smoking and Health (Ash), said the vote was a “decisive moment” in the battle to reduce the impact of smoking.

“Today we should remember the millions of people who have died too young from diseases caused by smoking, and the families and friends they left behind,” she said. “This misery must not be inherited by our children.”

Penny Woods, chief executive of the British Lung Foundation, said it was “an immense triumph”.

“Today parliamentarians stuck to their guns, despite the desperate efforts of tobacco lobbyists, in the name of the 200,000 children in this country who are every year enticed to take up smoking,” she said.

The new packages will be monochrome, with the brand name written in plain type next to warnings about the dangers of smoking, according to the plans.

Darker colours such as olive green have been proposed, as they are believed to represent danger. The tobacco industry and pro-tobacco campaigners have said the new law was a sign of government overreach, with the Tobacco Manufacturer’s Association saying there was a “complete lack of evidence that the policy will work”.

According to the World Health Organisation (WHO), tobacco kills nearly six million people a year worldwide. More than five million of those deaths are the result of direct tobacco use, while more than 600,000 are the result of non-smokers being exposed to second-hand smoke.

In its revision of the 2001 tobacco directive, the European Commission proposed to widen the scope of cigarette-trading rules to cover potentially harmful electronic cigarettes, flavourings, and marketing strategies.

Larger health warnings on cigarette packets and a total ban on flavouring, such as menthol, were all part of the proposals, agreed in 2014.

The new rules are aimed at preventing young people from taking up smoking,

Current legislation requires that health warnings cover at least 30% of the area of the front of the pack and 40% of the back.

The new legislation will make it mandatory for all cigarette packs to carry picture warnings covering 65% of their surface.

E-cigarettes will be regulated, either as medicinal products, if they claim to help smokers to quit, or as tobacco products.

Packs of fewer than 20 cigarettes, which are cheaper and hence more accessible to children, would be banned in the handful of countries where they are still allowed on the market.

Member states have to put the provisions on tobacco products into effect within two years of the updated directive's date of entry into force.