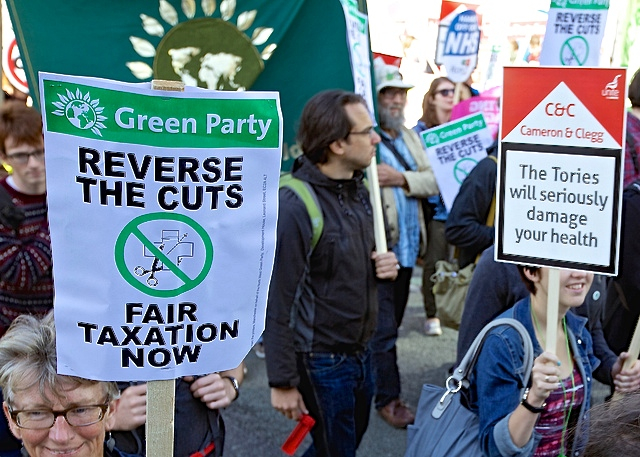 The United Kingdom today (22 May) votes in a European parliamentary election dominated by the EU membership referendum, but also a poll which could see a surprise last-minute surge for Britain’s Green Party.

While the majority of coverage leading up to the local and European elections has focused on the UK Independence Party (UKIP), the British Greens – long seen as irrelevant – are increasingly confident of making significant gains. They are already polling at their highest levels since 1989.

A YouGov poll last night had the Greens taking 10% of the vote, equivalent to three to six seats in Parliament, and more than the Liberal Democrats. The Lib Dems are braced for a complete wipeout in the European parliamentary elections, losing most of the 11 seats they won in 2009. It was reported this morning they have briefed senior party figures to say defeat was expected at this stage of the electoral cycle if they win between no and two seats.

The UK Green Party currently has two members sitting in the European Parliament – Jean Lambert and Keith Taylor (MEPs). Yesterday, leader Natalie Bennett told the BBC she expected to triple that number to six, and hoped to beat the Liberal Democrats. The party is part of the European Greens parliamentary group.

She said the party was “consistently polling” better than the Liberal Democrats and getting double-digit ratings “on a fraction of the media coverage” devoted to UKIP.

Some opinion polls have shown that the Greens are predicted to get 12% of the UK vote, the same number as the Liberal Democrats. The Greens have won two seats at each European election since they achieved their first representation in 1999. They won 8.6% of the vote in 2009, up 2.4% on 2005, polling more than 1.3 million votes.

Thanks to all those voting Green tomorrow! You’ll be in good company with 10,000s of others voting Green for the first time #VoteGreen2014

While the UK Greens back a referendum on Britain’s EU membership, as promised by the Conservative Prime Minister David Cameron, they will campaign for Britain to stay in the Union. They recognise the power of the European institutions on issues such as climate change but also call for reform of the institutions.

Cameron has said there will be an in/out referendum in 2017, after the General Election. Labour has been unconvincing on the issue, while the Lib Dems have backed a referendum only in case of an EU treaty change. The Green’s manifesto also has a firm commitment to keep the UK out of the euro, while Labour’s has none.

I’m was a blue voter but I will be voting @TheGreenParty tomorrow because I can’t trust @David_Cameron on #climatechange or #jobs anymore!

The Greens have positioned themselves as an alternative protest vote to UKIP. As well as backing the referendum, they also oppose the Transatlantic and Trade Investment Partnership between the EU and US and “neoliberalism”.

This means voters can back such stances without having to “hold their nose” and vote for UKIP, which is regularly dogged by accusations of insensitivity at best or racism at worst.

Uncomfortable but: of those taking #whyimvotingukip seriously, the saner ones should logically, probably vote Green. pic.twitter.com/HALST7zbrQ

The Greens are expected to profit from widespread disenfranchisement with the Liberal Democrats, which stems back to leader Nick Clegg’s breach of his general election manifesto promise not to raise tuition fees. The Liberals also sacrificed many of their voters by agreeing to become junior members in the UK’s ruling Conservative-led coalition.

Some centre-left or left wing voters who would not countenance voting Conservative, also feel let down by Labour. That sentiment comes from the fact the financial crisis happened on Labour’s watch, or before that the war in Iraq. Leader Ed Miliband has failed to inspire large swathes of the British population.

Some voters are looking at their ballot sheet and simply deciding the Greens are the best remaining option. The Greens also have about three times as many local councillors as UKIP, Bennett told the BBC.

Its campaigners are also targeting pro-European UK voters looking for dedicated engagement with the European Parliament.

The Greens’ surge has been underreported in the UK and Europe, as Nigel Farage, MEP and leader of UKIP, grabbed most of the headlines.

Earlier polls had the Eurosceptic party trouncing the opposition with 34 % of the vote. YouGov’s final European election poll last night, conducted for the Sun and the Times, has UKIP taking 27%, followed by Labour with 26%, the Conservatives with 22%,  the Green with 10% and the Liberals last with 9%.

The European and concurrent local elections will continue to be a forum for settling national scores. It’s worth noting, for example, that UKIP are yet to return an MP to Westminster, the national parliament, despite their expected triumph when the votes are counted on Sunday.

The lesser status of the European elections can also work in the Greens’ favour, with some commentators suggesting Labour voters could “loan” their votes to the party before returning them for the national elections.

The last European elections in the UK had a voter turnout of 35%. This year, in the last major electoral test before next year’s general election, it is expected to be 38%.

Undoubtedly that is a result of UKIP’s hugely increased profile and popularity, as well as the referendum debate. National issues such as immigration, post-crisis and Scottish independence also have an influence.

UKIP’s most recent public blunders are unlikely to prevent their victory at the polls but, over the long-term and perhaps unexpectedly, the UK Greens could also end up winners and with a significantly stronger voice than previously in Brussels.

British Eurosceptics, such as the UK Independence Party, see the EU as an oppressive, wasteful superstate that threatens Britain's sovereignty, want a referendum on whether to stay in the EU. They are expected to make big gains in this week's elections but less heralded has been a surge in support for the UK Green party.

While it would campaign to stay in the EU, the Greens are in favour of a referendum on Britain's membership and wider reform of the EU. Polls suggest this approach will poach voters from other parties and beat the Liberal Democrats into fourth place, as much as tripling the UK Greens' MEPs in Brussels.