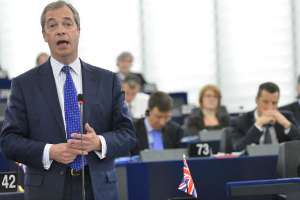 “UKIP MEPs are infamous for being not just Britain's laziest members of the European Parliament, but among the laziest in Europe,” MEP Rebecca Taylor, a member of the broadly pro-European Liberal Democrat party, wrote in a joint blog post with Petros Fassoulas, chairman of the UK’s European Movement.

The post – which appeared on the European Movement’s website – said that “if they were politicians of principle, they could refuse to take their seats after elected.”

“In fact UKIP are on record as boasting about how much money their MEPs claim, for not doing their jobs properly,” Taylor continued.

She accused UKIP leader Nigel Farage of “avoiding committee meetings and failing to vote even on issues that are important for the UK,” reprising criticisms levelled at Farage in the European Parliament earlier this year by the leader of the Alliance of Liberals and Democrats for Europe, Guy Verhofstadt.

'Prance around the UK'

MEPs in Farage's party avoid the hard committee work in Parliament and “prefer to prance round the UK making speeches to their followers and sending out angry press releases instead. Much easier!” Taylor wrote.

She also singled out the attendance record of UKIP MEP Paul Nuttall, a member of the environment, public health and food safety committee, saying he had attended only twice in three years.

She said that Nuttall was only spurred to attend his third committee meeting  – the recent vote on the tobacco products directive – when constituents began complaining about him on Twitter.

“Mr Nuttall’s attitude shows that UKIP MEPs are indeed lazy, exactly because they think they can get away with it. They claim to be avoiding the hard graft of parliamentary committee work out of principle, but those principles are soon chucked by the wayside if they suspect they will get any bad publicity,” Taylor added.

A UKIP spokesman hit back at the leader of Taylor’s political group, saying: "Guy Verhofstadt is a raging hypocrite. Those in glass houses should not throw stones. The arch-federalist who lives in Belgium attended the constitutional affairs committee [of which he is a member] on just two occasions out of 12 in 2012.”

“Farage regularly has 18-hour working days – debates, public meetings, television and radio appearances take time and preparation. That is what our MEPs are up to. This is often the way for the leaders of political parties,” the spokesman said.

Some UKIP MEPs like Farage and Nuttall see attending committees as “beating their head against a brick wall where they are consistently outvoted, and instead devote their time and energy to matters at home,” the spokesman said.

Taylor said suggestions that Verhofstadt was lazy were laughable, and called for more media scrutiny of UKIP.

The spat foreshadows what is likely to be an increasingly febrile campaign in the 2014 European elections, as UKIP’s poll figures in Britain have recently outperformed the Liberal Democrats and represent a challenge to the coalition led by the Conservative party.