UK plays Brexit hardball from a submarine base in Scotland 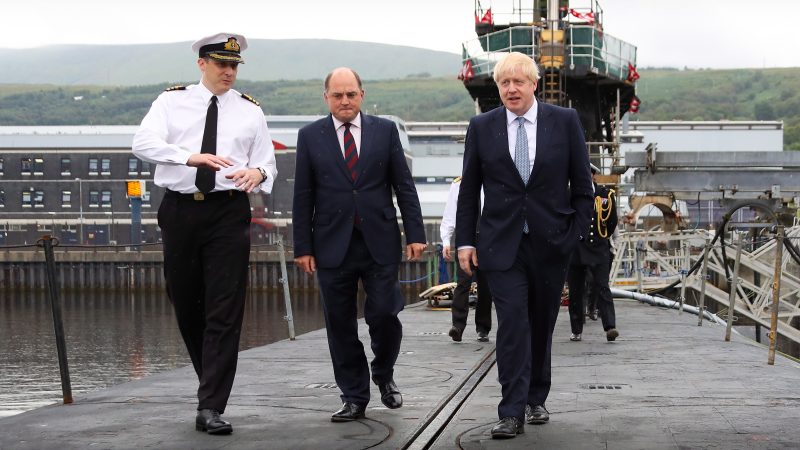 UK Prime Minister Boris Johnson said on Monday (29 July) the Brexit divorce was dead and warned that unless the European Union renegotiated, Britain would leave on 31 October without a deal.

Johnson’s bet is that the threat of a no-deal Brexit will persuade the EU’s biggest powers – Germany and France – to agree to revise the Withdrawal Agreement that Theresa May agreed but failed three times to push through the British parliament.

“The Withdrawal Agreement is dead, it’s got to go. But there is scope to do a new deal,” Johnson told reporters in Faslane, Britain’s nuclear submarine base on the Clyde in Scotland.

“We are going to go ahead and come out of the EU on October 31.”

When asked about his remark during the campaign for the party leadership that the odds on a no-deal Brexit were a million to one, he said: “Provided there is sufficient goodwill and common sense on the part of our partners, that is exactly where I would put the odds.”

Johnson also said that the Irish border backstop – designed to prevent the return of a hard border between Ireland and the United Kingdom’s province of Northern Ireland – was “no good, it’s dead, it’s got to go”.

Under the backstop, the United Kingdom would remain in a customs union with the EU “unless and until” alternative arrangements are found to avoid a hard border.

The 27 other EU members, though, say publicly and privately that the divorce settlement – including the backstop – is not up for barter. Many EU diplomats say they believe an election in Britain is highly likely.

If Johnson goes for a no-deal Brexit, some British lawmakers will attempt to stop him, possibly collapsing his government. If they try to thwart Brexit, an election becomes much more likely.

State of the Union

Foreign Secretary Dominic Raab said London was “turbo-charging” no deal preparations and cast the bloc as “stubborn” but denied he was threatening a bloc whose $15.9 trillion economy is nearly six times that of the United Kingdom’s.

Differences over Brexit have strained the bonds that tie the United Kingdom. While the country voted 52-48 to leave in 2016, Scotland and Northern Ireland voted to stay in the EU while Wales and England vote to leave.

The question of the unification of Ireland and British-ruled Northern Ireland will inevitably arise if Britain leaves the European Union without a divorce deal on 31 October, Irish Prime Minister Leo Varadkar said.

His promise to deliver Brexit, with or without a deal, has put him at odds with some in his party who oppose a “no deal” exit – including its Scottish leader Ruth Davidson.

“She is right to think that we should be going for a deal, not no deal,” Johnson said. “If our partners won’t move, won’t take out the backstop, won’t even begin to change that Withdrawal Agreement, they won’t compromise at all then of course we have got to get ready for no deal.”

Gordon Brown, a Scot and a former prime minister, said this month that Johnson might be the last UK prime minister as he could be on a collision course with Scottish nationalists.

Johnson, who met Scottish First Minister Nicola Sturgeon, rejected a fresh referendum on Scottish independence after Scots voted 55%-45% to remain in the United Kingdom in 2014.

“This was a once-in-a-lifetime, once-in-a-generation thing, everybody was told that,” he said. “It was on that basis that they cast their votes and I think it would be totally wrong now to break that promise to the people of Scotland and the UK and have another referendum.”

Sturgeon said Johnson was heading for a no-deal Brexit and warned that it was up to Scotland to decide their future. She said Brexit would have an impact on the timing of a future referendum on Scottish independence.

Speaking to reporters after a meeting with Johnson in Edinburgh, Sturgeon said there was no clarity on how he planned to reach a new exit deal when the European Union has repeatedly said it will not renegotiate the Withdrawal Agreement it reached with his predecessor Theresa May.

“That makes me think that whatever Boris Johnson might be saying publicly about his preference being to strike a deal, in reality he is really pursuing a no-deal Brexit because that is the logic of the hardline position that he has taken,” she said.

“I think that is extremely dangerous for Scotland, indeed for the whole of the UK.”

Some senior politicians have warned a no-deal Brexit could make the break up of the United Kingdom more likely and Sturgeon last week wrote to Johnson to say she would continue preparations for a second independence referendum.

“It is not in my view a democratic position to block the right of the people of Scotland to choose and I made that clear to him,” Sturgeon said after the meeting with Johnson.

The Scottish government will consider the timetable of its push for another vote over the summer, she said, adding: “Obviously what happens over that period with the negotiations around Brexit will have an impact on the decision that we make.”