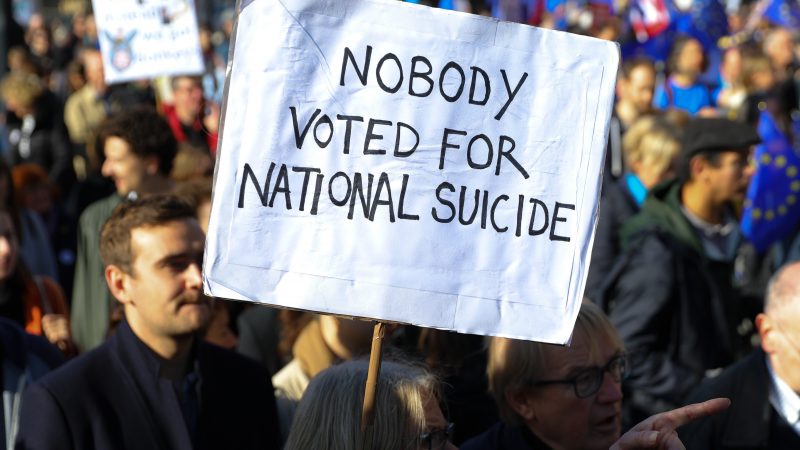 File photo. People attend the 'Together for the Final Say' march against Brexit in London, Britain, 19 October 2019. [Vickie Flores/EPA/EFE]

Britain faces a decade of major public policy challenges that could reduce economic performance to nearer that of struggling Italy, and increase inequality to the level of Bulgaria, Europe’s powerhouse, a think-tank said on Tuesday (18 May).

The Resolution Foundation said Britain had to address problems linked to Brexit on top of those faced by other countries including the impact of COVID-19, the transition to a net-zero carbon economy, an ageing population and technological change.

The 2020s will be the decisive decade during which the UK will face 5 key challenges: Brexit, the Covid aftermath, Net Zero, technological change & an ageing population. The Economy 2030 Inquiry, launched today, explores and tackles these seismic changes: https://t.co/Ge5eZPvfch pic.twitter.com/NX4GipCSmF

Without proper plans, Britain risked failing to address the slowest productivity growth for over 120 years in the past decade and higher inequality than any country in the European Union except Bulgaria, it said.

“What makes a new approach essential is the scale of coming change.”

Launching today: The Economy 2030 Inquiry, a groundbreaking new collaboration between RF and @CEP_LSE , funded by @NuffieldFound. Find out more in this summary video – and explore the new Economy 2030 website here: https://t.co/B0iX3FdT8O pic.twitter.com/wXrBVxfT3D

Prime Minister Boris Johnson has promised to “level up” Britain’s economy by targeting investment and jobs to areas that lag behind London and areas around the capital. He also talks of a “Global Britain” after its exit from the European Union.

But the Resolution Foundation said Britain lacked a plan to achieve these goals over the next decade and that the country risked squandering economic strengths such as high levels of employment, which were now at risk from increased automation.

As it launched an inquiry jointly with the Centre for Economic Performance at the London School of Economics, the Resolution Foundation said Italy had seen no growth in gross domestic product per capita over the past two decades while Britain recently fell further behind Germany.

“If the UK’s pace of underperformance relative to Germany continues at the same pace in the 2020s, then it will end this decade with GDP per capita much closer to that of Italy than Germany,” the think-tank said.

The inquiry is being funded by the Nuffield Foundation, a charity that funds research for social policy.

One response to “UK risks higher inequality that any EU country except Bulgaria: Think-tank”