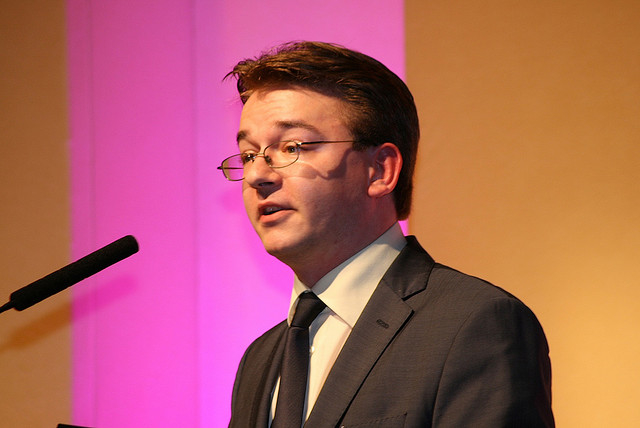 Britain’s anti-EU UK Independence Party abruptly replaced its policy chief on Tuesday, less than four months before a national election, because it said he was too busy to finish writing the party’s manifesto.

Political rivals have accused UKIP, which wants Britain to leave the European Union and sharply curb immigration, of lacking serious policies on other issues. The manifesto, eagerly awaited by critics and supporters alike, is designed to show voters it does.

A UKIP spokesman said outgoing policy chief Tim Aker had stood down in favour of Suzanne Evans, the party’s deputy chairman, to focus on other party commitments.

Aker is also a UKIP member of the European Parliament, a local councillor in England and is campaigning for a seat in the May 7 British parliamentary election.

UKIP sources denied a report that Aker had been sacked for failing to deliver a final draft of the manifesto by the start of January. “He asked to stand down, it’s definitely not a sacking,” one source told Reuters.

Still, UKIP’s failure to set out its policy ideas before an election in which it hopes to deliver “a political earthquake” after winning European elections in Britain and two seats in the British parliament, has exposed it to ridicule from critics.

John Prescott, a member of the opposition left-wing Labour party and a former deputy prime minister, urged people to mock UKIP on Twitter by using the social media site to post sarcastic policy ideas under the hashtag #MyUkipManifesto.

“We will encourage gay marriage (but only during droughts),” ran a suggestion from one user, a jokey reference to a former UKIP councillor who last year blamed flooding in Britain on the passage of gay marriage laws.

“Rename Britain Bongo Bongo Land,” quipped another user, referring to a 2013 incident in which a then UKIP member of the European Parliament used the derogatory expression to refer to African countries to which Britain gives foreign aid.

UKIP is expected to unveil its manifesto at the end of February at its spring conference. The party has had problems with manifestos before. In 2010, UKIP leader Nigel Farage called that year’s document “486 pages of drivel.”

Pollsters have predicted UKIP could win around six seats in May and YouGov on Tuesday put its support at 15 percent, behind Labour and the ruling Conservatives, who were on 32 percent each.

The UK Independence Party was the most successful British party in the European elections. The Eurosceptic party is now looking to build on that success, adding to the pressure on Prime Minister David Cameron ahead of May's national election.