Philip Hammond, Britain’s foreign minister, told Western Balkan states aspiring to membership of the European Union yesterday (5 November) that he admired their enthusiasm, but believed it would be even greater if the EU carried out reforms that Britain wants.

“What I think is fantastic is that, having identified the need for reform and the deep flaws in the existing structure, we have a lot of candidate countries that are banging on the door, warts and all, even with all the current flaws,” Hammond said on a panel in Berlin with foreign ministers from Western Balkan countries.

“How much more enthusiastic will they be when Europe is reformed to be an outward looking, competitive driver in the global economy, bringing jobs to its people, work to its young people in a way that frankly it is not doing at the moment,” he added. 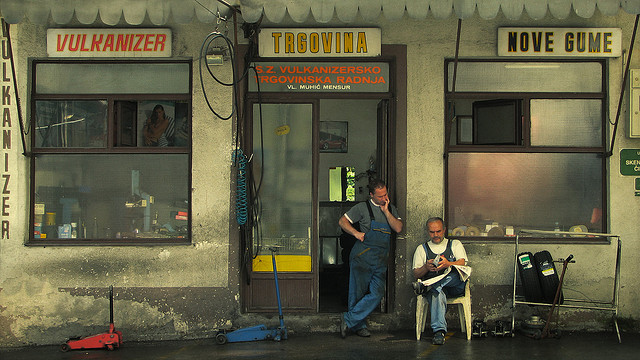 On the job. Sarajevo, 2009. [Anthony Guennegou/Flickr]

Hammond said it was wrong to say that British Prime Minister David Cameron wanted Britain out of the EU.

“Under our peculiar form of democracy, he doesn’t have a way of stopping other people from saying what they think, especially when some of these other people are running at 18% in the opinion polls,” he said.

That seemed to be a reference to the anti-EU UK Independence Party, which along with some of his own Conservative party members is putting pressure on Cameron before a May 2015 national election. In response, Cameron has said he would try to curb EU immigration if re-elected and promised to hold a referendum on Britain’s EU membership if re-elected.

No candidate country is expected to join the EU during the term of this Commission, its President Jean-Claude Juncker has said (see background).

Turkey, Macedonia, Montenegro, Serbia and Albania are candidate countries, whereas Bosnia and Herzegovina and Kosovo are considered potential candidates.

Macedonia was granted candidate status in December 2005. However, the former Yugoslav republic has been unable to start accession negotiations due to a dispute over the country's name, which is identical to a Greek province.

In the Commission documents, Macedonia and Kosovo do not even appear under those names: Macedonia is referred to as "the former Yugoslav Republic of Macedonia" and Kosovo called, under an asterisk, "Kosovo under the United Nations Security Council Resolution 1244/99" because the country's unilateral independence has not been recognised by all EU countries.

Membership negotiations have started with Montenegro in 2012 and with Serbia in January 2014.